The rapid development of modern industry has also brought increasingly serious energy and environmental problems. The application of sustainable energy has brought new opportunities for the resolution of these two problems. The development of efficient and cheap catalysts is crucial for energy conversion. Due to its extremely high atom utilization rate and relatively uniform active center, single-atom catalysts have become a hot research topic. In particular, single-atom catalysts supported on carbon-based carriers have broad application prospects in electrochemical energy conversion (such as ORR, OER, HER, etc.). Since joining the Beijing Institute of Technology in 2018, Associate Researcher Chen Wenxing has been devoted to the development of a universal and efficient interface control method for carbon-based single-atom catalysts. With the help of a variety of characterization methods such as synchrotron radiation and the combination of theoretical calculations, systematic and in-depth studies on catalytic performance and reaction mechanism have been conducted. As the corresponding author, he published articles in top journals such as J. Am. Chem. Soc., Energy Environ. Sci., Nano. Lett. and Chem. Sci.

First, the research team successfully prepared a single-atom Cu catalyst supported on ultra-thin carbon nanosheets for efficient electrocatalytic oxygen reduction reaction (ORR). Due to the strong synergy between Cu atoms and heteroatom (N, S) doped and controlled carbon-based carriers, and the synthesized Cu-SA/SNC single-atom catalyst has significantly enhanced ORR activity, and the half-wave potential in alkaline media can reach 0.893 V vs. RHE. In addition, according to XAFS analysis of synchrotron radiation and DFT calculations, the bond interface structure of Cu(+1)-N4-C8S2 atoms is the catalytic active site of ORR, and the reaction to intermediate adsorption is free. Cu and carbon-based supports work synergistically to adjust the free energy of the intermediate adsorption reaction, which plays a vital role in enhancing ORR activity. (Zhuoli Jiang, Wenxing Chen, * et al. Energy Environ. Sci., 2019, 12, 3508-3514. Corporate or institutional affiliation of the first author is Beijing Institute of Technology) Link to the paper: 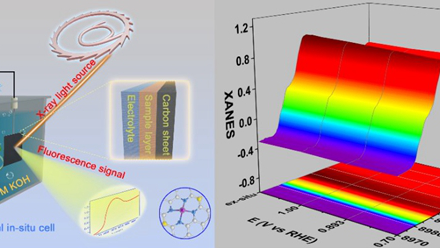 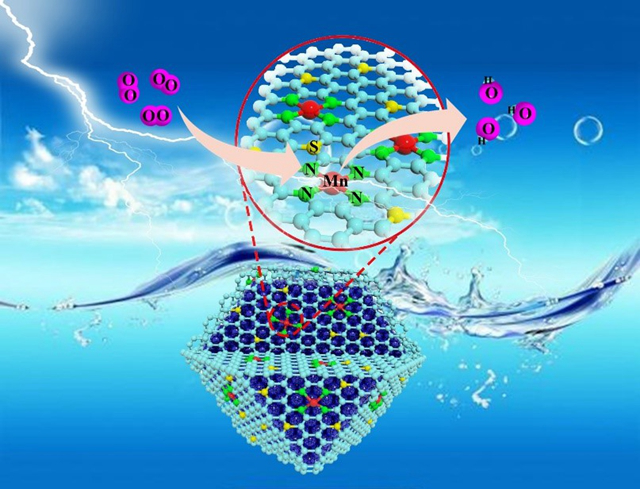 Carbon-based Mn monoatomic material is also a promising dual-functional ORR and OER catalyst. The research team designed a Mn-N2C2 monoatomic bifunctional electrocatalyst with an ORR half-wave potential (E1/2) of up to 0.915 V vs. RHE and an OER overpotential of 350 mV (10 mA cm-2) ) under alkaline conditions. Using in situ XAFS method combined with DFT theory calculation, it is found that the low-valent Mn2+-N2C2 atomic interface is the actual active site of the ORR reaction, and the high-valent Mn4+-N2C2 atomic interface is the actual reaction site of the OER process. The synergistic effect of atoms and electrons between Mn and the carbon carrier on the atomic interface can adjust the reaction free energy of the intermediate adsorption product, which plays an important role in improving the catalytic reaction activity of the oxygen-containing electrode. (Huishan Shang, Wenxing Chen,* et al. Nano. Lett., 2020, 10.1021/acs.nanolett.0c01925. Corporate or institutional affiliation of the first author is Beijing Institute of Technology) Link to the paper: https://pubs.acs.org/doi/10.1021/ acs.nanolett.0c01925. In addition, the research team also collaborated with Professor Wang Dingsheng of Tsinghua University to design an asymmetric atomic interface with a local structure of Co1-P1N3 by in-situ phosphating of metal-organic framework encapsulated triphenylphosphine. Tests show that the structure has excellent electrocatalytic HER performance. In an acidic medium, the overpotential at 10 mA cm-2 is 98 mV and the Tafel slope is 47 mV dec-1, which is superior to CoN4 interface structure and other comparative catalysts. Jiawei Wan, Wenxing Chen, * Dingsheng Wang, * et al. J. Am. Chem. Soc. 2020, 142, 8431-8439. Beijing Institute of Technology is the partner) Link to the paper:
https://pubs.acs.org/doi/abs/10.1021/jacs.0c02229. 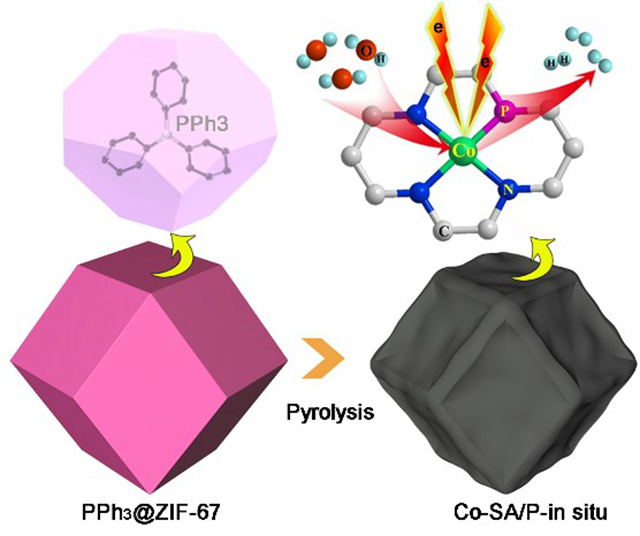 The above research results have been supported by the platform of the Beijing Key Laboratory of Structurally Controllable Advanced Functional Materials and Green Applications and the Advanced Materials Experiment Center of the School of Materials Science and Engineering, and supported by the National Natural Science Foundation of China and the Innovation Talent Support Program of the Research Institute. Special thanks to Academician Li Yadong and Professor Wang Dingsheng of Tsinghua University, and Professor Zhang Jiatao of Beijing Institute of Technology for their support. Thanks to Dr. Pei Jiajing from the team of Professor Zhuang Zhongbin of Beijing University of Chemical Technology, Researcher Zheng Lirong and Researcher Dong Juncai of Beijing Advanced Sciences and Innovation Center for CAS, Researcher Wang Yu of Shanghai Synchrotron Radiation Facility, Dr. Zhenghang Zhao of Stanford University, and Dr. Sun Wenming of China Agricultural University for electrochemical analysis, synchrotron radiation test and help on theoretical calculations. Thanks to Dr. Shang Huishan and Master Jiang Zhuoli for their hard work.

Associate Researcher Chen Wenxing graduated from the School of Chemistry, Beihang Univerisity in 2011; PhD in 2015 from the National Synchrotron Radiation Laboratory of the University of Science and Technology of China, under the direction of Professor Wu Ziyu, an internationally renowned synchrotron X-ray spectroscopy expert; In 2016, he conducted postdoctoral research in the Department of Chemistry, Tsinghua University, under the academician Li Yadong, a distinguished Chinese chemist; in 2018, he was employed by the School of Materials Science and Engineering, Beijing Institute of Technology. At present, he is committed to the precise synthesis of metal catalysts at the atomic level, and the application of the catalysts in the fields of electrocatalysis, organic catalysis, photocatalysis, and enzyme catalysis, as well as the use of X-ray spectroscopy (XANES, EXAFS) to study the local structure of catalysts on the atomic scale. And he applies the in-situ test technology based on synchrotron radiation large scientific equipment to explore the relevant reaction mechanism, and has a good cooperative relationship with Beijing Advanced Sciences and Innovation Center for CAS, Shanghai Synchrotron Radiation Facility, National Synchrotron Radiation Laboratory and Stanford Synchrotron Radiation Lightsource and other domestic and foreign synchrotron radiation platforms. He has published more than 110 papers, a total of more than 5000 SCI citations, 28 highly cited papers, H factor 40 (research group website: https://www.x-mol.com/groups/wxchen, Researcher ID: AAE- 9886-2020), of which over 30 papers are published on in Nat. Commun. (3), J. Am. Chem. Soc. (5), Angew. Chem. Int. Ed. (3), Adv. Mater. (5), Energ. Environ. Sci. (1), Nat. Catal. (1), Sci. Adv. (1), PNAS (1), Chem (1), Nano Lett. (1) , Chem. Sci. (1) and other journals as corresponding author/first author (including common author).