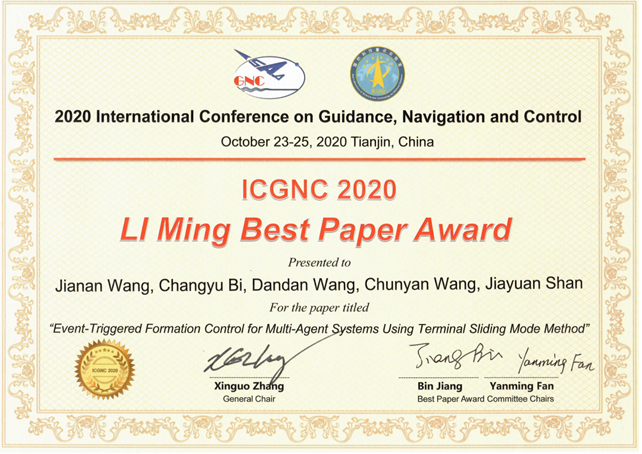 ICGNC is currently China’s largest international conference on navigation, navigation and control (GNC) in aviation, aerospace, navigation and land etc.. It is held every 2 years and has been successfully held for 8 times. This time, it was held in Tianjin from October 23 to 25. Academicians Bao Weimin, Academician Chen Zhijie and Academician Su Donglin were invited to give reports related to guidance, navigation and control. 811 papers were received and 616 papers were included after strict evaluation. The Li Ming Best Paper Award was funded by Li Ming, an academician of the Chinese Academy of Engineering, in 2014, which aims to reward outstanding young scientific and technological workers under the age of 45 and encourage more young people at home and abroad to devote themselves to cutting-edge academic guidance, navigation and control, with no more than one winner in each session. By 2020, 7 people have won this prize.

The awarded thesis was co-authored by Wang Dandan, a postdoctor, and Bi Changyu, a postgraduate, under the guidance of Associate Prof. Wang Jianan. For the second-order multi-aircraft system with interference, the non-singular terminal sliding mode method and the adaptive gain method are adopted for the first time to design a brand-new fully distributed event trigger control protocol, and four event triggering conditions are proposed, which have higher precision and lower trigger frequency than single event triggering condition. By introducing a finite-time extended state observer, the trigger times and chattering frequency are further reduced. According to Liapunov’s theorem, the actual finite time stability of the closed-loop system is proved.

In the past 40 years, Laboratory of System and Simulation, BIT, has been focusing on the research and teaching of target information detection and recognition, stability control and guidance of moving body, precision guidance and control system, system modeling and simulation, which has a complete aircraft semi-physical simulation system and a UAV indoor physical verification platform, and has played the role of national team in the development of equipment for navigation aerial ammunition. Since 2004, it has won 3 national second prizes, 2 provincial and ministerial second prizes and 1 third prize. Based on vision positioning, navigation, recognition and tracking, some achievements have been made in UAV intelligent control, cluster system distributed detection, cooperative control and cooperative guidance, including successfully completed programs supported by National Natural Science Foundation of China (NSFC), PLA Rocket Force and Science and Technology Commission of CMC, etc., and several top papers. 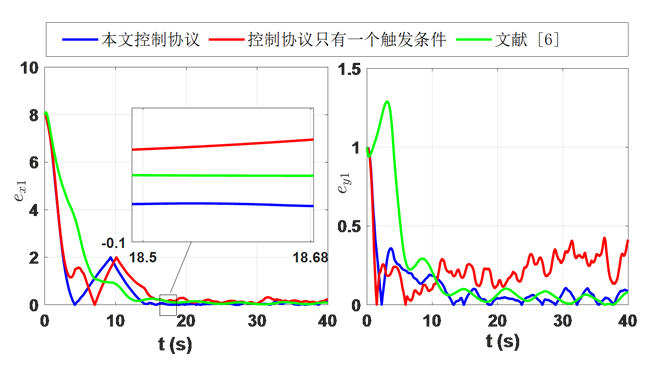 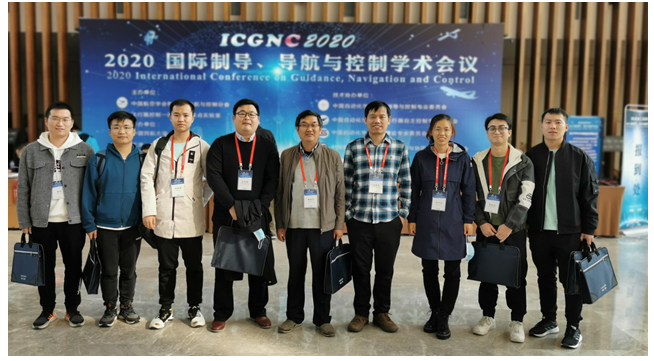 During the time in center for post-doctoral studies, Wang Dandan, the key contributor of this thesis, mainly conducts researches on cooperative guidance and control of multi-aircraft, and has published top papers on IEEE Transactions on Cybernetics (IF: 11.079) and Journal of the Franklin Institute (IF: 4.036), and has published one Chinese textbook. Besides, she was also supported by special funding for pre-postdoctoral research. Bi Changyu, whose main research is multi-aircraft system cooperative control technology, has published 1 conference paper, 1 journal paper, and has applied 1 invention patent. In addition, as the team leader, he has also lead the team to be shortlisted in the final stage of the 6th “Flying Shark Cup” China Graduate Future Flight Vehicle Innovation Competition.