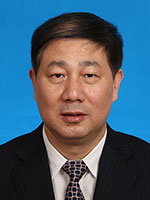 Xiang Changle, PhD., professor, doctoral supervisor, Academician of Chinese Academy of Engineering，born in 1963 in Anhui province. He is a Distinguished Professor of “Chang Jiang Scholars Program”, the head of the “Chang Jiang Scholars Technology Innovation Team” of the Ministry of Education and the technology chief of “973” Project. In 1984, 1987, and 2001, he received a bachelor's degree in engineering, a master's degree in engineering, and a doctorate in engineering from BIT. He studied in the United States from 1999 to 2000. He joined the work in April 1987 and served as deputy director and director of the Vehicle Research Office. In 1997, he was the director of the National Key Laboratory of Vehicle Transmission (Northern Polytechnic). In 2000, he served as executive vice president of the School of Vehicle and Traffic Engineering. In 2002, he was the Dean of the School of Mechanical and Vehicle Engineering. In November 2014, he served as a member of the Standing Committee of the Party Committee of BIT and Vice President. In May 2015, he served as deputy secretary and vice president of the Party Committee of BIT.In September 2019, he became Executive Deputy Secretary of the Party Committee of BIT.

He is also a member of the Energy and Transportation Department of the Ministry of Education of the Ministry of Education, a specialist in the tank and armored vehicles of the General Armament Department, a vice chairman of the China Society of Automotive Engineers, a chairman of the Off-road Vehicle Branch, and an executive director of the China Mechanical Engineering Society. As the leader of “Chang Jiang Scholars” of the Ministry of Education Innovation Team and the leader of the national defense science and technology innovation team, he has long been responsible for major research projects of the national ministries and commissions, leading the development direction of military vehicle transmission. At the same time, as the person in charge of many major scientific research projects in the country, he has overcome many key technological difficulties of military vehicle transmission and made outstanding contributions to the development of military vehicle transmission technology in China. In 1993, he was awarded the "Outstanding Teacher of Beijing", "Excellent Teacher of Ordnance Industry Corporation", the "Young and Middle-aged Experts with Outstanding Contributions to National Defense Science and Technology Industry" in 2004, and the "National Defense Industry Industrial System Advanced Worker" in 2005. In 1998, he was eligible for the "Special Government Allowance". In 2003, he was selected into the National "Cross-Century Talent Plan" of the State Education Commission. In 2004, he was selected as the "National Talent of the New Century Talent Project". In the year of 2006 and 2012, as the first completed, he won 2 second prizes of National Science and Technology Progress Award, and in 2009 as the main participants, he won 1st National Science and Technology Progress Award.