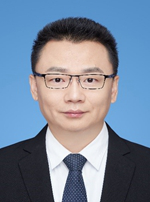 Wang Bo, PhD and professor who was born in October 1982, Fufeng, Shanxi. He received a bachelor's degree from Peking University in 2004, and he received a master's degree from the University of Michigan (Ann Arbor) in 2006. In 2009, He received his PhD in Univ. Of California, Los Angeles. He participated in the wok in 2011, and served as the Associate Dean of the former School of Chemical Engineering and Environment in Beijing Institute of Technology (BIT) in October, 2015. In June, 2016, he served as the Executive Dean of the School of Chemical Engineering and Environment of BIT, and Executive Dean of the Advanced Research Institute of Multidisciplinary Science of BIT. In September 2019, he served as Standing Committee Member of the Party Committee & Vice President of BIT.

Wang Bo is engaged in new type of nonporous materials, open-frame polymer theory and design and its application research in key separation processes, environmental protection and energy gas production. He has published more than 60 papers in Nature, Science and other academic journals, and his papers have been cited more than 8,000 times by SCI. He has obtained 6 US patents and 3 Chinese invention patents. Funded by the National Science Fund for Distinguished Young Scholars, he was selected in the national “Ten Thousand People Program” as a leading talent, the National Innovative Talents Promotion Plan as the Leading Young and Middle-aged Talents in Science and Technology Innovation, and the Second youth program of the Recruitment Program of Global Experts. He has won the "Chinese Chemical Society Youth Chemistry Award", Beijing youth five four Medal. He also served as the managing director of the MOF Commission of the International IZA Society, and the editorial board of Chinese Chemical Letters, Chinese Journal of Chemistry and Scientific Reports.