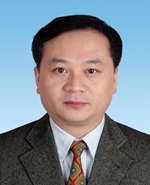 Born in January 1968 in anyuan, Jiangxi province, Wei Yiming is a doctor and professor of engineering. He received his bachelor's degree and master's degree from Kunming University of Science and Technology in 1989 and 1992. In 1996, he received his doctorate from the University of Science and Technology Beijing. He started work in December 1991 and became deputy director of the Institute of Science and Technology Policy and Management of the Chinese academy of sciences in September 2000. He was appointed as dean of the school of management and economics at the Beijing Institute of Technology(BIT) in December 2008, and became a member of its standing committee and vice President in September 2019.

He has long been engaged in Energy and Environment System Engineering and Climate Engineering Management. He has led more than 50 key national research and development projects and etc. He has published more than 10 books and more than 190 SCI/SSCI papers, among which 21 papers were selected as the "Most Cited Papers" in the world. In 2018 he became one of the world's most cited scientist. He has been awarded 12 provincial and ministerial awards and supported by the National Science Foundation for Outstanding Young People. He is a distinguished professor of Chang Jiang Scholars of the Ministry of Education, and has been selected into the National Special Support Program for High-level Personnel Recruitment. He is also a member of Chang Jiang Scholars Program and academic leader of the National Natural Science Foundation of China. In addition, he is the vice chairman of Project Management Research Committee of China and the founding chairman of energy economics and management research branch, and the deputy editor, consultant and editorial board of more than 10 important international journals. He accepted the invitation as a member of the fifth and sixth Natural Science Fund Committee of Beijing, the National Natural Science Fund Committee Management Department of the Advisory committee, the National Ecological Environment Protection Expert Committee, China Meteorological Career Advisory Committee and the sixth review coordinator of the third energy system of the lead authors of the working party in the United Nations Panel on Climate Change.