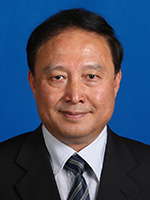 Wang Xiaofeng, PhD., researcher, born in July 1962 in Heilongjiang province. Wang joined the CPC in May 1983, graduated from the artillery department of East China Institute of technology (present: Nanjing University of Science and Technology) with a master’s degree in March 1988, and started working. Wang graduated from Department of aerospace engineering and mechanics of Harbin Instituted of Technology with a doctor degree. He had served as the deputy director, director of academic affairs, deputy secretary of the party committee and deputy president of Nanjing University of Science and Technology since March 1988. In March 2006, Wang served as the secretary of the party committee and served as president and deputy secretary of the party committee in December 2006. He has started working in BIT as Standing Committee Member of the Party Committee & Vice President.

He has been long engaged in teaching and scientific research on controlled dynamics of electromechanical systems, optimization of dynamic characteristics of electromechanical systems, and application of modern mechanics in weapons. He led and participated in more than ten research projects, and presided in the key fundamental  “973” national defense project and etc.. With more than 40 published papers, 8 province-level scientific progressive awards and one teaching award, 4 chief editor or participated compilation of teaching materials, he is currently the Vice President of China Institute of Military Engineering, member of science and technology commission of National Administration of Science, Technology and Industry for National Defense, chief technology scientist of “973” project, Vice President of Beijing higher education association. He also enjoys honorary doctorate awarded by Sukhoi State Technical University of Gomel and Institute of Metal Research, Belarus Academy of Sciences. He is a senior management talent of “511 talent project”, the national defense and technology industry, the young and middle-aged experts with outstanding contributions rated by Jiangsu Province, a member of the tenth and eleventh CPPCC committees of Jiangsu Province, and enjoys government subsidies of the State Council.