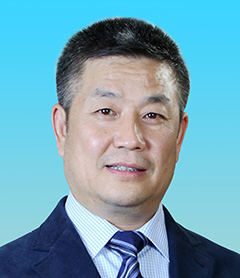 Secretary of the CPC BIT Committee

Born in Liaoning Province in 1963, he is a doctor, research fellow, professor of BIT. He was a member of the Chinese People's Political Consultative Conference for thirteen terms and a member of the Communist Party of China for twelve terms. In 1987, he served as the director of Technology Department of BIT, assistant to the president, vice president and deputy secretary of the Party Committee in charge of science and Technology, industry and academic institutions, human resources, internationalization, party building, cadres construction, and other work. In April 2016, he was appointed as Secretary of the CPC BIT Committee.

He was formerly a part-time member of the People's Liberation Army General Armaments Department, a member of the Chinese Ordnance Engineering Society, a member of the Beijing Municipal Association for Science and Technology, and a member of the Chinese Internal Combustion Engine Society. He is currently a deputy director of the Engine Committee of the Chinese Ordnance Engineering Society, vice-president of Beijing Internal Combustion Engine Society, vice-president of China Association for Industry-university-research Cooperation. In the field of professional technology, mainly around the simulation design and control of vehicle power transmission system to carry out theoretical analysis and research and development work, he received six ministerial-level scientific and technological awards, published more than 150 academic papers, received more than 20 national invention patents, co-authored 4 books. At the same time, he has carried out scientific and technological management, party building ideological and political research, published more than 10 management papers. He has been awarded the honorary title of Advanced Individual in National Defense Research Management and Advanced Individual in National University Research Management by the Ministry of Education.