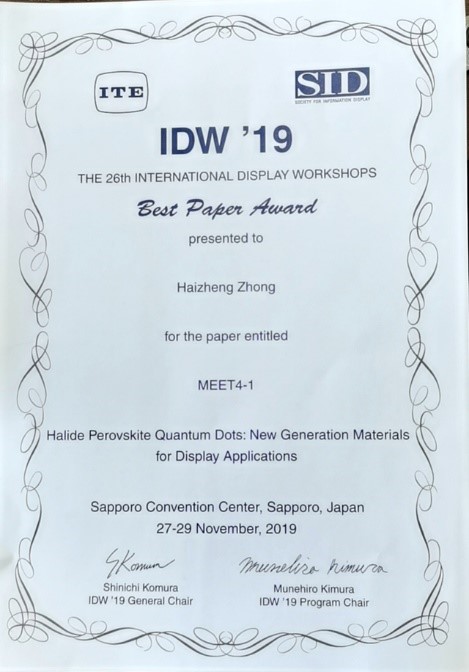 Japan International Display Workshop (IDW 2019) is one of the top conferences in display field cosponsored by The Institute of Image Information and Television Engineers, ITE and The Society for Information Display, SID. It involves various branches of display technology, including OLED Displays and Related Technologies (OLED), Micro/Mini LEDs, AR/VR and Hyper Reality (AR/VR), three-dimensional systems and applications, quantum dot display and so on. The conference was held from November 27th to 29th in Sapporo, Japan. A total of 465 papers were received, including 275 academic reports and 190 posters. The conference attracted more than 1,000 academics and technical personnel from industrial community.

Prof. Zhong Haizheng's team has engaged in the research of quantum dots and its application technology. In 2015, he was the first to report on the application of perovskite quantum dots  (ACS Nano 2015, 9, 4533)in the world. Under the support of  the key program in advanced electronic materials of Ministry of Science and Technology, his invention, perovskite quantum dot optical film technology, has entered application demonstration stage. In this meeting, he was invited to give an invitation report and chaired the MEET chapter. The progress of the in-situ fabrication technique of perovskite quantum dots and their display applications by the BIT team was introduced. In particular, the advancement of the industry's industry-university-research has gained wide attention and recognition from international peers. After the meeting, team of BIT was elected to be the winner of the Best Academic Paper Award (16 papers in total).