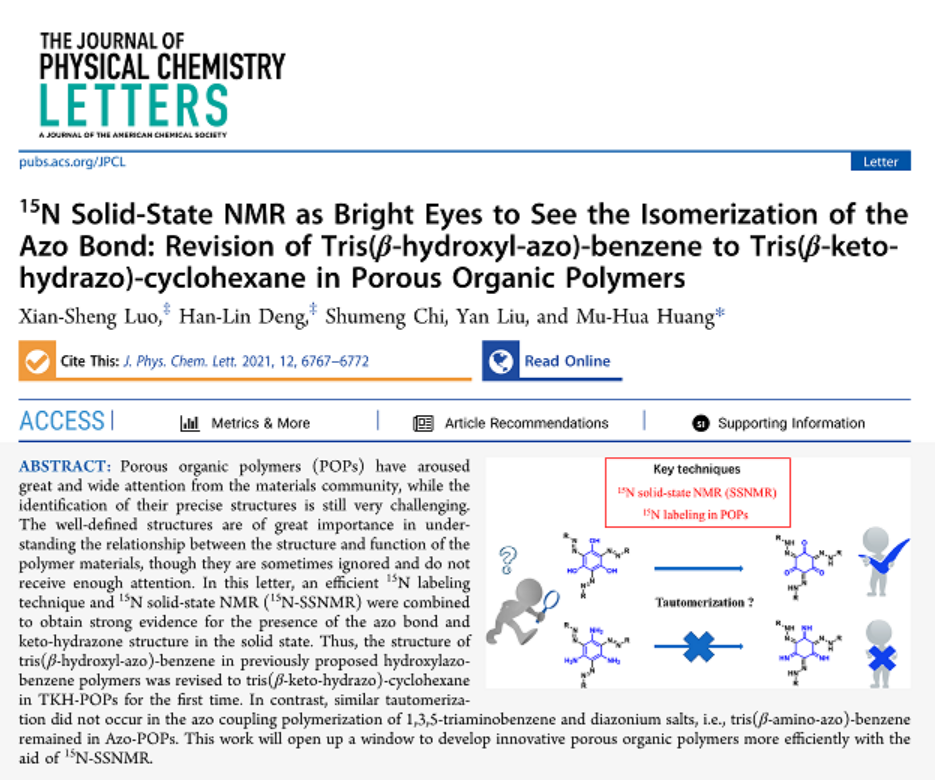 Recently, Prof. Huang Muhua’s research group has skillfully combined Solid-State NMR and 15N Isotope Labeling, which proved the Tris (β-Keto-Hydrazo)-Cyclohexane in the solid state for the first time in the world so as to establish the structure of TKH POPs. The paper entitled 15N Solid-State NMR as Bright Eyes to See Isomerization of Azo-bond in the Solid State: Revision of Tris (β-Hydroxyl-Azo)-Benzene to Tris (β-Keto-Hydrazo)-Cyclohexane in Porous Organic Polymers was published on J. Phys. Chem. Lett. (2021, 12, 6767-6772. DOI: 10.1021/acs.jpclett.1c01750), whose co-first authors are Luo Xiansheng and Deng Hanlin, master students of School of Material Science and Engineering, BIT, and the corresponding author is Prof. Huang Muhua. 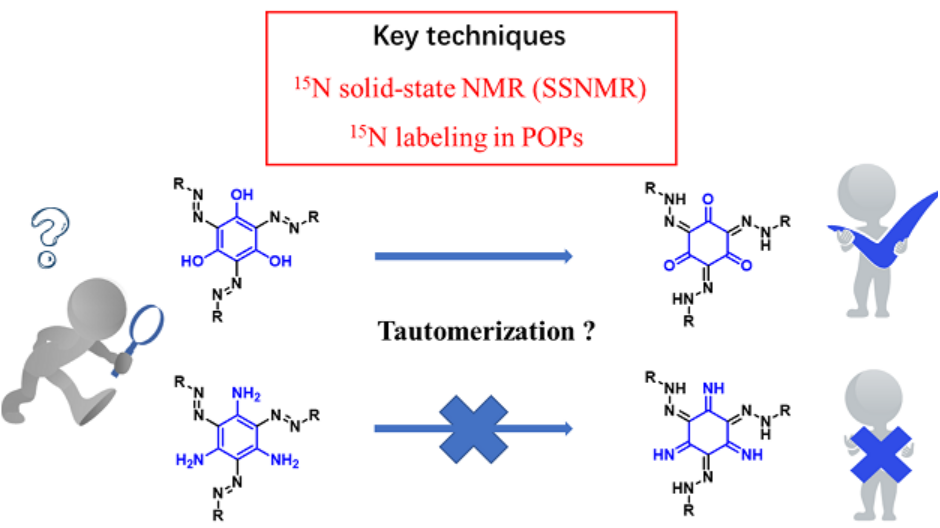 POPs, which are completely covalently connected by light elements such as C, H, O and N, have the characteristics of low skeleton density, good chemical stability and easy functional modification, and have developed into an important new type of material. Crystalline POPs represented by COFs and amorphous POPs represented by HCPs, CMPs, PIMs and PAFs have become the focus of this emerging research field.

The research group has been paying attention to the practical preparation and application technology of azobenzene POPs (Fig. 2), which rapidly prepares Azo-POP-1~3, a kind of Azo-bond POPs, (J. Mater. Chem. A, 2018, 6, 5608) by NaBH4 mediated reductive coupling reaction; synthesizes Azo-POP-4~6, a kind of POPs with aminoazobenzene structure, (Chem. Mater., 2019, 31, 5421) based on the azo-coupling polymerization of 1,3,5-triaminobenzene and diazonium salt; then synthesizes Azo-POP-7, the first soluble azobenzene POPs by conformational twist monomer, to be applied in organic/water two-phase catalytic reactions (J. Mater. Chem. A, 2019, 7,15048); finally, quickly prepares Azo-POP-13~14 by ROMP with reductive coupling polymerization (Polym. Chem., 2020, 11, 6429).

When phloroglucinol was polymerized with diazonium salt, a peak of about 175 ppm appeared in the solid-state NMR carbon spectrum of the product, and the research group was keenly aware of the irreversible heterogeneous structure of Tris (β-Hydroxyl-Azo) to constitute Tris (β-Keto-Hydrazo)-Cyclohexane, and determined the existence of the TKH structure by the solution NMR of model compound, and thus reported TKH-POP-1~4 (ChemComm., 2020, 56, 2103). 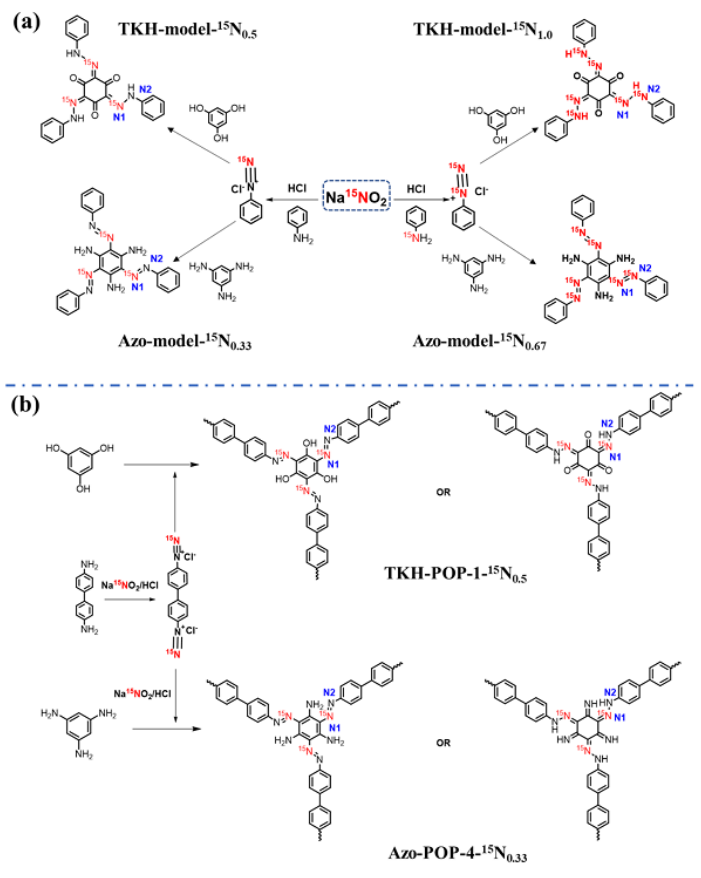 However, whether this Tris (β-Keto-Hydrazo)-Cyclohexane also exists in the solid state has not been confirmed by the scientific community. The research group first used 15N -labeled sodium nitrite as a cheap and easy-to-obtain 15N source to the model compounds of get TKH-model-15N0.5 and TKH-model-15N1.0, and POP of TKH-POP-1-15N0.5. For comparison, simultaneously prepared the coupling products of 1,3,5-triaminobenzene and corresponding diazonium salts (Azo-model-15N0.33, Azo-model-15N0.67 and Azo-POP-4-15N0.33), and found that azo-bond still existed.

The research group observed the correlation peak of NH in the 15N-1H-HSQC (solution NMR) of the model compound of TKH-model-15N1.0, which undoubtedly proved the direct connection of N-H in the TKH structure. At the same time, in solid-state NMR, the difference between 8ppm (C= "N-) and -180" ppm (-N-C) is a 15N chemical shift of 189 ppm, which means that isomerization has occurred (Fig. 4). As a sharp contrast, relatively low-field chemical shifts (89ppm and 34ppm) appeared in the 15N solid-state NMR spectrum of the azobenzene structure, and the chemical shift difference between the two nitrogens was about 55ppm, which should be caused by the intramolecular hydrogen bond between the NH2 and the azo to form a six-membered ring.

Furthermore, the research group tested the 15N-1H HETOCOR solid-state NMR spectra of TKH-POPs and its model compounds, in which N obviously interacts with two kinds of hydrogen to produce CP, corresponding to the hydrogen and NH of aromatic ring respectively. 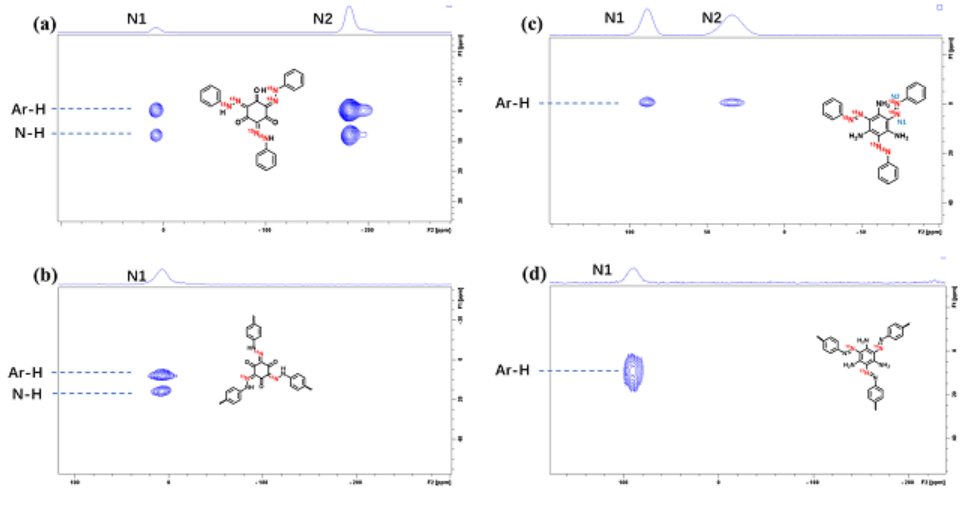 Based on the above, the revision of Tris (β-Hydroxyl-Azo)-Benzene to Tris (β-Keto-Hydrazo)-Cyclohexane was successfully conducted, laying a foundation for further understanding of the relationship between the structure and properties of POPs.

Profile of the corresponding author:

Prof. Huang Muhua, doctoral supervisor of BIT, whose research fields include: POPs, EM and NMR spectra, has undertaken more than 10 fund projects, including: National Natural Science Foundation of China, Beijing Natural Science Foundation, foreign specialized projects of the Ministry of Science and Technology and horizontal cooperation projects of enterprises as the project leader. He has published over 40 research paper on journals of Nature Chemistry, Journal of Materials Chemistry A, and Chemistry of Materials, etc., and has applied for more than 30 Chinese invention patents and has 11 authorized. In recent years, 4 graduate students have won national scholarships under his guidance.