In recent years, two-dimensional materials and their heterostructures have received widespread attention due to their potential applications in electronic, optoelectronic and spintronic devices. Nonetheless, the realization of 2D heterostructures with atomically flat and clean interfaces remains challenging, especially for air-sensitive materials. The methods for preparing two-dimensional materials are mainly divided into two categories: the "bottom-up" method represented by molecular beam epitaxy (MBE) and chemical vapor deposition, and the "top-down" method represented by mechanical exfoliation. Among them, the "bottom-up" method can only grow specific two-dimensional materials on a specific substrate and obtain specific twist angles with the substrates due to the constraints of growth dynamics,, thus greatly limiting the available types of two-dimensional heterojunctions. Compared with the "bottom-up" material synthesis strategy, the "top-down" method represented by mechanical exfoliation has the characteristics of operational simplicity and flexibility. When it comes to van der Waals materials, it is easy to prepare layered samples and corner structures that are difficult to achieve by traditional growth method. However, traditional mechanical exfoliation is performed in air or glove boxes with many problems: (1) pollution among the environment will introduce a great number of impurities or defects. Even for stable two-dimensional materials (such as graphene), samples prepared by this method are difficult to be measured with surface-sensitive techniques such as angle-resolved photoelectron spectroscopy (ARPES) and scanning tunneling microscopy (STM) after being introduced into vacuum but not being annealed due to the adsorption of numerous molecules on the surface, and high-temperature annealing may introduce more impurities or defects. (2) Many single crystal surfaces cannot be stable in air or even in low vacuum environments, such as Si(111)-7×7, Cu(111), Fe(100), etc. The surface of these materials will inevitably be oxidized and adsorb numerous impurities. Therefore, the mechanical exfoliation method under atmospheric pressure cannot prepare a heterogeneous interface constructed between the two-dimensional material and such a substrate.

The working principle diagram of the equipment is shown in Fig.1. All operations are done in ultrahigh vacuum. First, they used a variety of surface preparation methods, such as high-temperature annealing, ion sputtering, plasma etching, and MBE growth to obtain an atomically flat and clean surface. The cleanliness of the substrate surfaces can be confirmed by in situ scanning tunneling microscopy, low-energy electron diffraction, angle-resolved photoemission spectroscopy and other ultrahigh vacuum surface analysis methods. They then cleaved the two-dimensional material in ultrahigh vacuum to obtain a fresh surface and lightly pressed onto the substrate surface. Finally, they annealed and separated the system, obtaining a variety of monolayer and low-layer two-dimensional materials. Using this method, they not only repeated the gold-assisted exfoliation technique under the atmosphere, but also successfully obtained a variety of previously unreported two-dimensional heterojunctions, including Bi-2212/Al2O3, Bi-2212/Si (111), MoS2/Si (111), MoS2/Fe, MoS2/Cr, and FeSe/SrTiO3 (arbitrary angle). 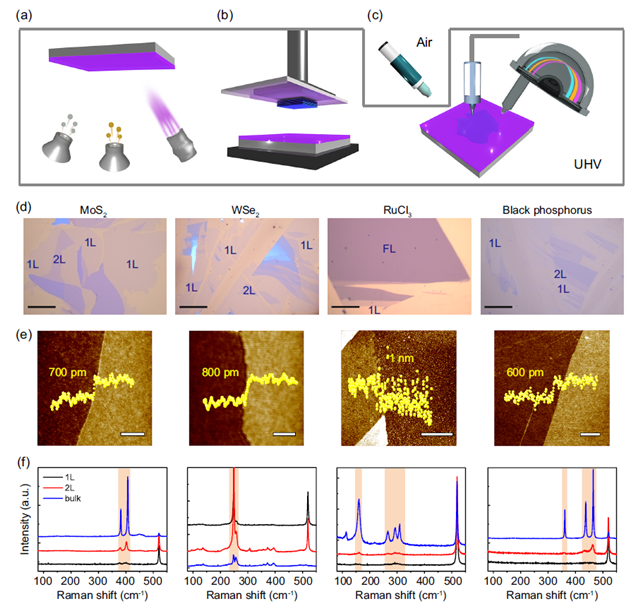 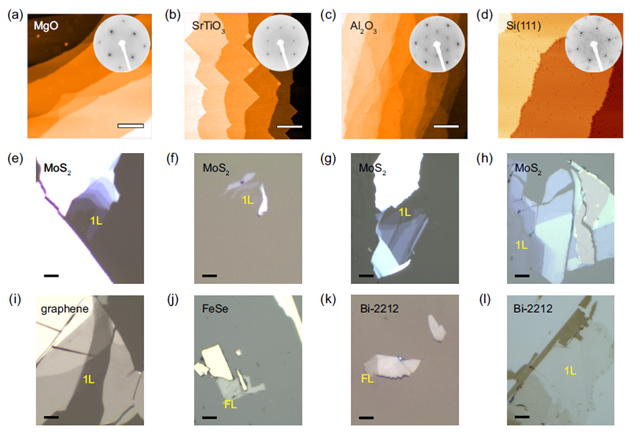 To further demonstrate the capabilities of the system, they chose two systems as examples. (1) Using gold-assisted exfoliation technique, they prepared millimeter-level monolayer black phosphorus samples in ultrahigh vacuum, and characterized the samples using situ low-energy electron diffraction and angle-resolved photoelectron spectroscopy, capturing clear diffraction spots and hole-shaped energy bands along the high symmetry direction (Figure 3). This is the first relevant measurement of monolayer black phosphorus in the world. (2) In order to reveal the effect of different metal substrates on the physical properties of two-dimensional materials, they studied the optical properties of monolayer MoS2 and WSe2 on different metal surfaces (Figure 4). By measuring the fluorescence spectrum of the single layer of WSe2 on different metals, they unexpectedly found that in addition to the Au substrate, the remaining surfaces such as Ag, Fe, Cr and so on did not quench the characteristic A exciton emission of WSe2, with the peak position slightly offseted. Through Raman spectroscopy, they found that MoS2 on the Au and Ag surfaces, characterized by Raman peaks E2g and A1g, exhibiting a peculiar exfoliation behavior in addition to frequency movement. 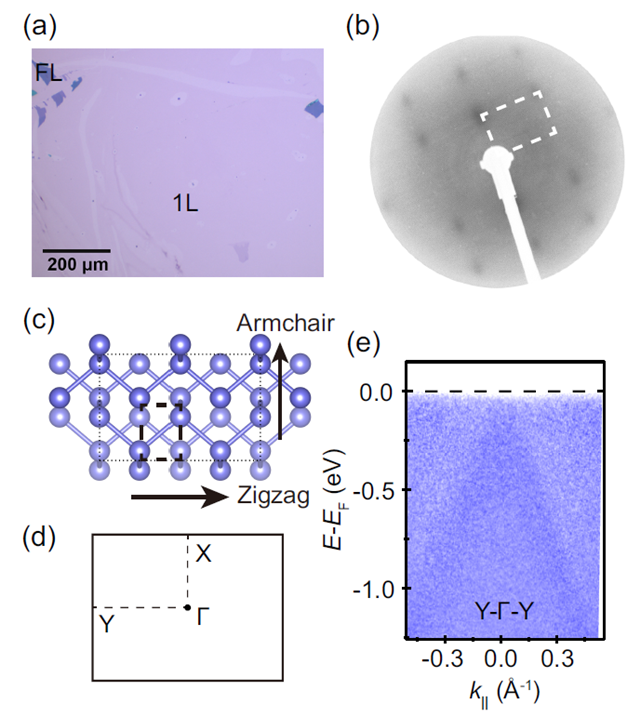 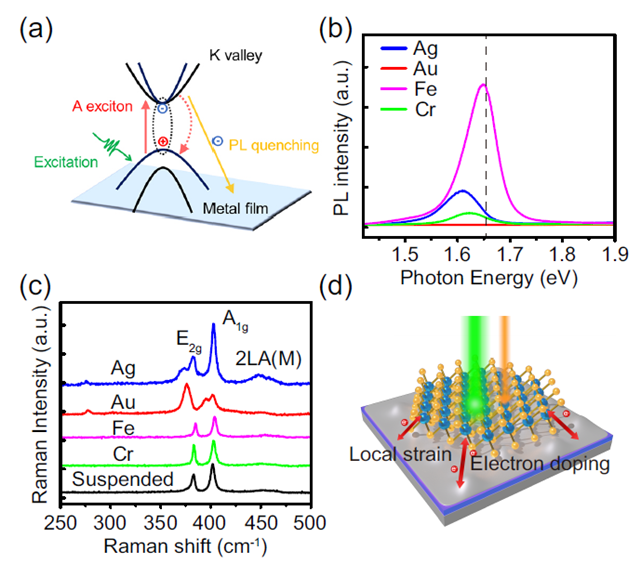 The work provides a brand new method for the further preparation of high-quality two-dimensional materials and heterojunction samples as well as the investigation of the intrinsic properties of materials and the interface-induced phemomena. The results were published in the Science Bulletin (doi.org/10.1016/j.scib.2022.05.017, Impact Factor: 11.780) under the title Exfoliation of 2D van der Waals crystals in ultrahigh vacuum for interface engineering. The work has been funded by the National Natural Science Foundation of China, the Ministry of Science and Technology, the Beijing Municipal Natural Science Foundation, the International Cooperation Project of the Chinese Academy of Sciences and the Pilot B of the Chinese Academy of Sciences.

Huang Yuan is a professor from Advanced Research Institute of Multidisciplinary Science of BIT and a doctoral supervisor who focuses on the preparation, characterization, device processing, and physical property measurement/regulation of two-dimensional materials. He has published more than 80 SCI papers in Nature Physics, Nature Communications, Physical Review Letters, ACS Nano, etc., including more than 40 articles as the first author (including a total) and corresponding authors. The total citations of his paper are more than 4100 times. He has presided over the National Key R&D Program (Youth Project), the National Fund OfFirst Outstanding Youth Fund and Surface Project, and the Chongqing Outstanding Youth Fund Project. In 2019, he was selected as a member of the Youth Promotion Association of the Chinese Academy of Sciences, and in 2020, he was awarded the honorary title of "China's Top Ten Scientific and Technological Emerging Figures" by the China Association for Science and Technology. The year 2021 has witnessed his winning the second prize of the Innovation Award of the Invention and Entrepreneurship Award of the China Invention Association (ranking the first). He is a reviewer for well-known journals in domestic and abroad such as Physiological Review Letters, Nature Communications, Advanced Functional Materials, ACS Nano, Nano Letters, Acta Physica Sinica, etc., and also a young editorial board member of Physics, Chinese Physics Letters, InfoMat, and Materials.