Recently, the team of Professor Wang Zhenhua and Professor Sun Kening from School of Chemistry and Chemical Engineering of BIT has made important progress in the construction of high-performance lithium-sulfur batteries. The relevant research results were published in the top international journal Advanced Materials (impact factor 30.849), titled Catalytic Mechanism of Oxygen Vacancies in Perovskite Oxides for Lithium-Sulfur Batteries. Hou Wenshuo, a doctoral student from the School of Chemistry and Chemical Engineering, is the first author of the paper, and Professor Wang Zhenhua, Professor Sun Kening and Professor Wang Guoxiu from the University of Technology Sydney are the corresponding authors.

Lithium-sulfur (Li-S) batteries have a high theoretical specific energy (2600 Wh kg-1) and are considered to be the development direction of a new generation of secondary batteries. However, there are still some problems that limit the technical development of lithium-sulfur batteries, such as the insulating properties of active material sulfur and discharge product lithium sulfide; the shuttle effect caused by the production of soluble intermediate lithium polysulfides (LiPSs) during the charging and discharging process; the slowness of LiPSs conversion reaction kinetics leads to low utilization of active materials and a rapid decline of battery capacity. In order to solve the above problems, it is necessary to fundamentally suppress the shuttle effect of LiPSs and improve the kinetics of the conversion reaction of LiPSs. In 2020, the team proposed the in-situ precipitation method to prepare a heterostructure of perovskite and nano-metal (STO@Co), which effectively suppressed the polysulfur shuttle effect and promoted the conversion of LiPSs through adsorption-catalysis synergy. Related achievements were published in the top journal Chem. Eng. J. (2020, 409:128079).

With the support of the National Natural Science Foundation of China, the team of Professor Wang Zhenhua and Professor Sun Kening from the School of Chemistry and Chemical Engineering of BIT selected strontium titanate-based perovskites with adsorption properties and electrochemical stability based on the theory of defect chemistry based on the previous research. Oxygen vacancy concentration was regulated on the strontium titanate-based perovskite oxide Sr0.9Ti1-xMnxO3-δ (STMnx) (x="0.1-0.3) using ore oxides as substrate materials to improve its adsorption-catalytic performance. A high-performance Li-S battery is realized. The Li-S battery with STMn0.3 with higher oxygen vacancy concentration as the cathode carrier can still provide a high initial specific capacity of 780 mAh g-1 and a low attenuation rate of 0.032 after 1500 cycles at 2C. This quantitative regulation strategy of oxygen vacancies has enlightening significance for the design and regulation of defective materials, and can be popularized and applied in the field of lithium-sulfur batteries and related energy storage and conversion systems. 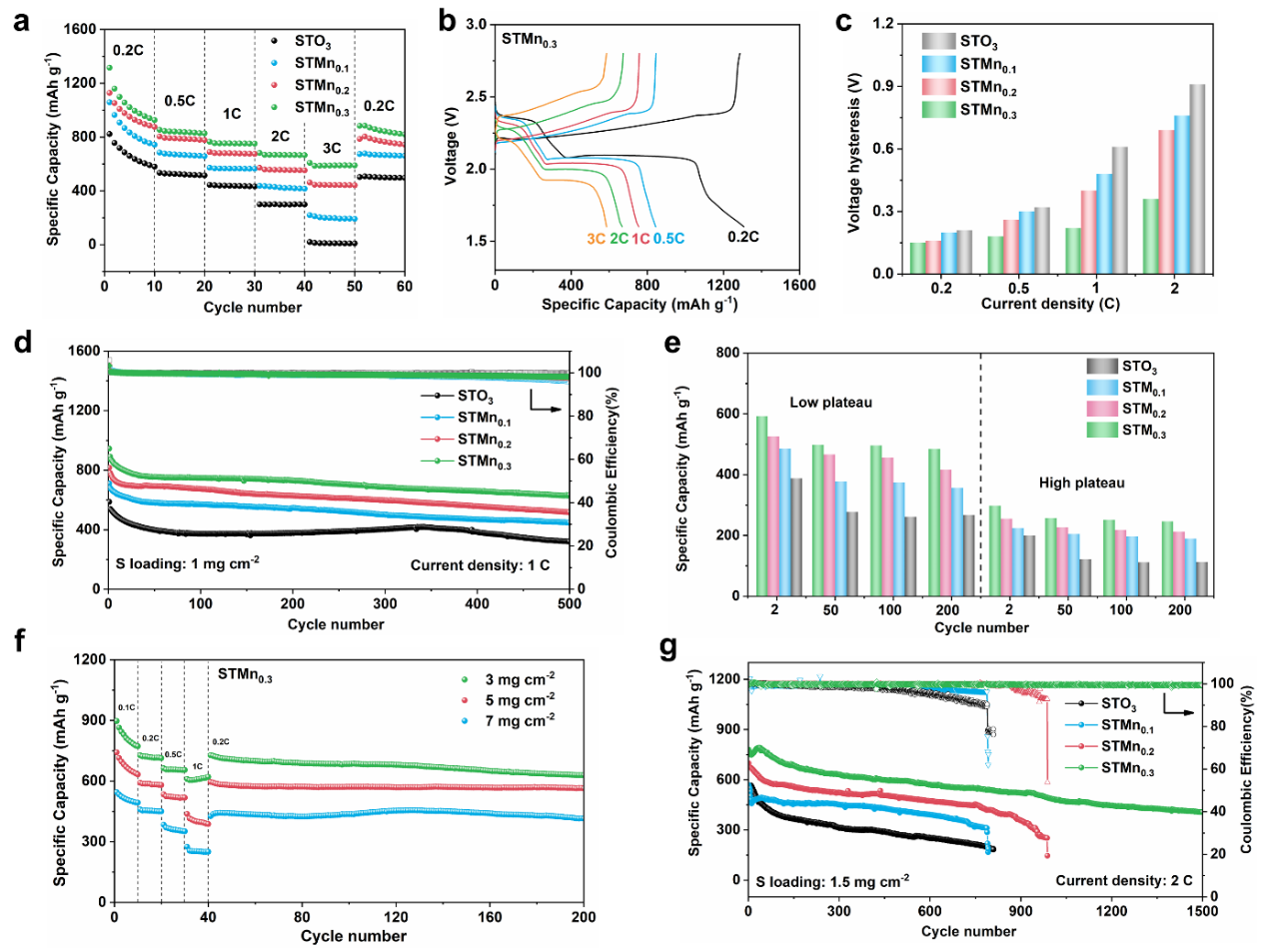 The above research work was supported by the National Natural Science Foundation of China and the Beijing Key Laboratory of Chemical Power Sources and Green Catalysis.

Wang Zhenhua, Secretary of the Party Committee of the School of Chemistry and Chemical Engineering, BIT, tenured professor and doctoral supervisor, is currently the deputy director of the Beijing Key Laboratory of Chemical Power and Green Catalysis, and the youth director of the Chinese Society of Particles. He has long been engaged in the research of molecular structure design and interface regulation of new battery materials, electron/ion transfer law at interface and bulk phase, controllable preparation and structure-activity relationship of energy materials, specific energy storage devices and high-efficiency energy conversion devices. He has published more than 100 SCI papers, and has won the second prize of National Technological Invention Award (second finisher) and the first prize of Science and Technology Progress Award of the Ministry of Education (second finisher).

Sun Kening, Distinguished Professor of BIT, Doctoral Supervisor, Distinguished Professor of Changjiang Scholars of the Ministry of Education, Leader of the Innovation Team of the Ministry of Education, Director of Beijing Key Laboratory of Chemical Power and Green Catalysis. He received special allowances from the State Council and was selected as a national talent project. He is mainly engaged in the interdisciplinary research in the fields of electrochemistry and new energy materials, and has achieved a series of achievements in the field of energy storage and conversion. He led three national awards and eight provincial and ministerial awards. He has published more than 340 papers in international academic journals such as Nature Commun, Adv Mater, and Adv Energy Mater. He has been cited nearly 6,000 times, edited two academic books and one textbook, and obtained 40 national invention patents.