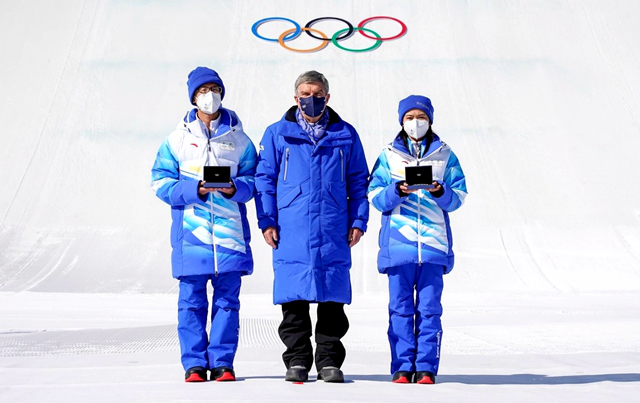 "This is a very precious memory, we deeply feel your sincerity, thank you!"  With a smile on his face, International Olympic Committee President Thomas Bach solemnly handed a shining badge with Olympic Rings to Jiang Haixia, a winter Olympics volunteer of BIT.

On February 21st, the International Olympic Committee held a reception in Big Air Shougang and awarded the Olympic Medal.  Sun Chunlan, member of the Political Bureau of the CPC Central Committee and vice Premier of The State Council, and CAI Qi, member of the Political Bureau of the CPC Central Committee, secretary of the Beijing Municipal Committee of the CPC and president of the Beijing Winter Olympics Organizing Committee, received the Olympic Gold Medal.  Thomas Bach, president of the International Olympic Committee (IOC), announced the award decision. Gou Zhongwen, director of the General Administration of Sport of China, and other officials were also presented with silver MEDALS and badges to staff of Beijing Organising Committee for the 2022 Olympic and Paralympic Winter Games and volunteer representatives. Jiang Haixia, from the Youth League committee of The Beijing Institute of Technology, attended the ceremony as one of the two representatives of winter Olympics volunteers and received a badge of honor belonging to the more than 18,000 Winter Olympics volunteers.

In December 2020, BIT started winter Olympics volunteer recruitment reserves within the scope of work. Through layers of pageant, Jiang Haixia first became  a volunteer as a reserve and then officially turned a volunteer in September, 2021. She formally mounted guard in January 2022, as a volunteer in Big Air Shougang, whose advocate accountability unit was BIT. She undertook broadcast traffic and business services in the field of security work, provided guidance and translation services for foreign media and photographers, and be responsible for traffic control points of commentators' seats and check access permissions.

"Although I was not able to witness the wonderful moment when Chinese athletes won gold MEDALS, sticking to my post is the best cheer for my motherland!"  Su Yiming and Gu Ailing Eileen won two gold MEDALS for China on the Big Air Shougang during the 2022 Beijing Winter Olympics. However, she could not see the stadium from her working position during the match. Although it was only one step away from the best media photography platform for watching the match, she did not move in order to stick to her post. With the cheers in her ears, she cheered for the Chinese team silently in her heart.

In addition, Jiang haixia is also the leader of the closed-loop station of the Winter Olympics volunteers, which has heavier responsibilities than the student volunteers.  During the Olympics, she is not only to arrange travel, accommodation, to concern student volunteers’ mood changes, to mobilize, but also in charge of the party construction, the information submitted, the daily management of the volunteer, thoughts lead, mental health, entertainment, etc. She would be this "first-line teachers" of this big ideological and political lesson, winter Olympics. 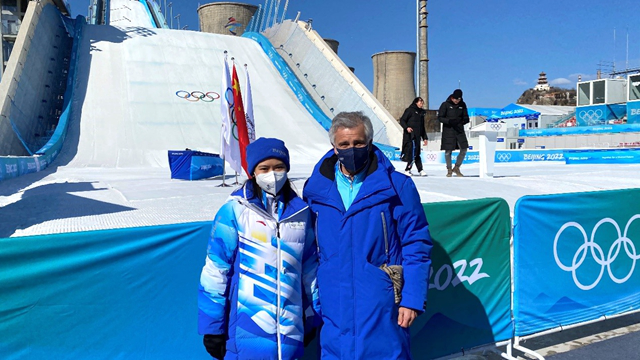 "Recalling volunteer dribs and drabs, we, 187 BITers, held in the position of Big Air Shougang. With professional, high quality, warm volunteer service and BIT spirit, we witness to the impressive results created by China's Olympic athletes, feel the national culture collision and strength of nations, get the point of “Together for a shared future”.  "Jiang Haixia said.

With pure expectation and great enthusiasm, a total of 548 teachers and students of BIT went to be the volunteer of the Winter Olympic Games. They stayed at their posts and provided warm and considerate service. BIT spirit has made the blue sky brighter. 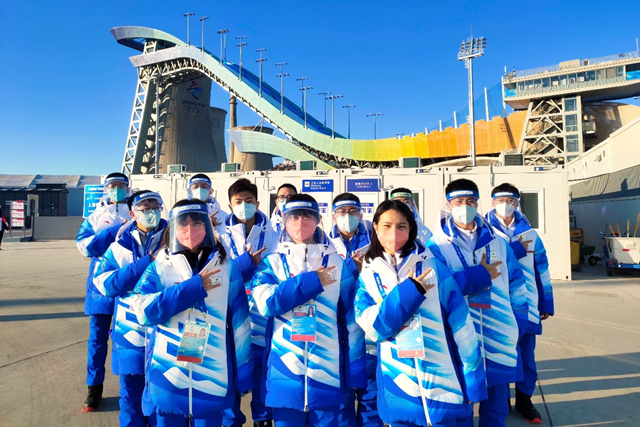 "It is the glorious tradition of the teachers and students of BIT to inherit the red gene and bravely undertake the major tasks of the Party and the country.  We seize the opportunity of the Winter Olympics to strengthen the sense of mission and pride of teachers and students, so that the youth will bloom in the place where the motherland needs it most."  Liu Yuan, secretary of CYL Committee, shared his feelings about the "Winter Olympics +" ideological and political lessons.

With the successful end of the 2022 Beijing Winter Olympic Games, the teachers and students of BIT are committed to the endless pursuit of a powerful country. Volunteer service is over, and the new era youth would study hard and grow up to shoulder the responsibility of national rejuvenation.