The 5th International Conference on Biolinguistics held at BIT 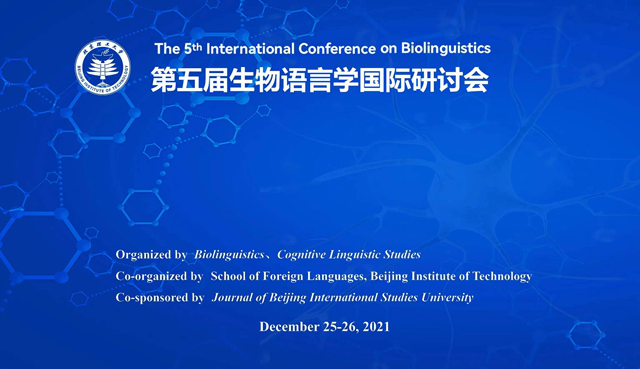 The 5th International Conference on Biolinguistics was held at Beijing Institute of Technology (BIT) from December 25th to 26th in the form of an online conference. The conference was organized by the editors of Biolinguistics and Cognitive Linguistic Studies, hosted by the School of Foreign Languages of BIT, and co-organized by the editorial board of the Journal of Beijing International Studies University.

Professor Wang Bo, Vice President of BIT, delivered the opening speech. He expressed his heartfelt thanks to the experts and scholars for their long-standing support to the School of Foreign Languages of BIT, clarified the consistency of research paradigms and research methods between biolinguistics and natural sciences, emphasized the value of biolinguistics as a cross-cutting frontier discipline, and the important role of this disciplinary symposium in advancing the development of biolinguistics in China.

Professor Hu Jianhua from the Institute of Linguistics, Chinese Academy of Social Sciences, interpreted “We shall go up the line” in the Book of Songs from the perspective of language evolution. Prof. Wen Xu from Southwest University explores the interaction between emotional expression, culture and biology from the perspective of happiness, anger and sadness in daily life. Professor Du Shihong of Southwestern University explores the hypothesis of the musical origin of language from an epistemological perspective and provides systematic arguments based on philosophical and biological discussions. Professor Gábor Győri of ELTE University, Hungary, explored the interaction between the evolutionary function of language and cognitive linguistics. Professor Pan Junnan of the Chinese University of Hong Kong conducted a cross-linguistic comparative study of wh-quantifiers based on Chinese, French, Korean, Japanese, and Vietnamese corpora to explore systematic differences in the way quantifiers are allowed and the mechanisms by which they operate. Prof. Kleanthes Grohman from the University of Cyprus systematically reviewed the birth and development of biolinguistics. More than 150 students and faculty members from leading universities and research institutes at home and abroad listened to the conference presentations.

In addition to the keynote lecture, 25 panel presentations and seminars were conducted by faculty and students from universities and research institutes at home and abroad on many branches of biolinguistics, covering topics such as language origin and evolution, brain neurocognition, child language acquisition, mediated language research, cross-linguistic comparisons. The language studies included not only Chinese and other dialects from different historical periods, but also other foreign languages. Dr. Quan Zhenzhen, Assistant Professor of the School of Life at BIT, was invited to attend and present at this conference, and a number of faculty and students from the School of Foreign Languages gave panel presentations and participated in seminars.

At the closing ceremony, Prof. Du Shihong gave a systematic review and overview of the basic issues of biolinguistics and gave an outlook on the subsequent research directions.

Experts and scholars expressed that this international conference on biolinguistics has a wide range of topics, which are both professional and cutting-edge, local and international, and are of great significance for promoting specific research and disciplinary development of biolinguistics in China.