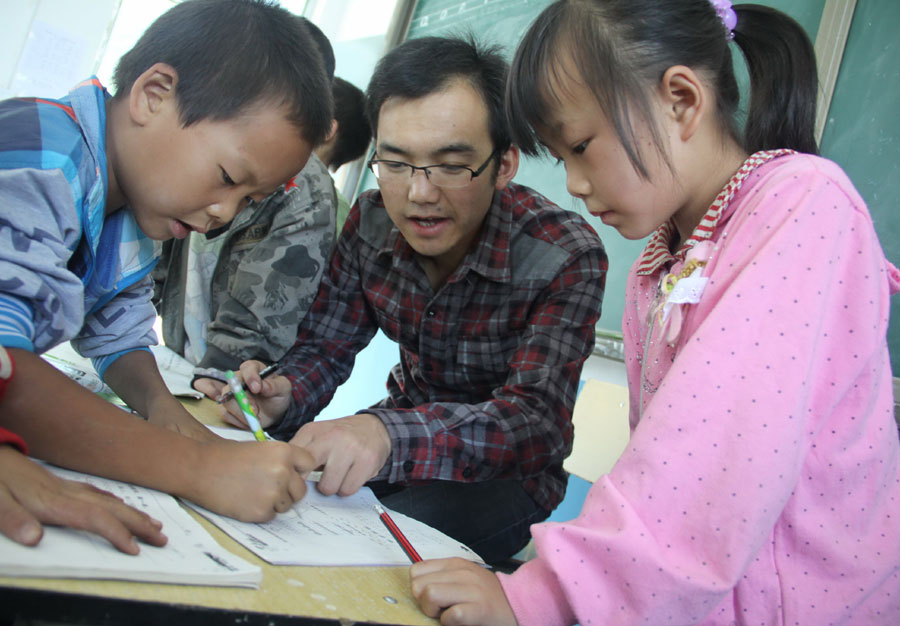 A college graduate chooses to return to the rural area in Huize county, Yunnan province with a dedication to improving local education in the poverty-stricken village. [Photo by Hu Yongqi/China Daily]

After graduating from Beijing Institute of Technology last month, Xing Lina plans to return to her hometown in Guizhou province to work as a grassroots official.

When she was in primary school, her father, who has been a grassroots official for almost 30 years, would take her to nearby villages, where she saw how impoverished the area was. Many villagers lived in dilapidated houses in mountainous areas and children wore broken shoes, she said.

After she enrolled at university in 2014, she became even more keenly aware of the great gap in economic development, education and medical resources between her hometown and big cities.

"I made up my mind then that once I graduated, I would devote myself to the development of my hometown, where I am most needed and would feel most fulfilled," Xing, 25, said.

Although she has been offered more highly paid jobs at companies in Chongqing and Chengdu, Sichuan's provincial capital, she has decided to follow in her father's footsteps and work in underdeveloped areas.

Xing is one of many university graduates choosing to work in remote and rural regions.

Last year, in a reply to a letter from 118 graduates studying at China University of Petroleum-Beijing in Karamay in the Xinjiang Uygur autonomous region, President Xi Jinping encouraged graduates across the country to contribute more to the Party, the country and the people.

Xi, who is also general secretary of the Communist Party of China Central Committee and chairman of the Central Military Commission, expressed his support after learning that the 118 graduates were taking grassroots jobs in Xinjiang, and wanted to work with people of different ethnic groups toward the development of the country's western region.

"There will be ups and downs along the road ahead, and the great rejuvenation of the Chinese nation can only be achieved through the hard work of generations of youth," he wrote.

Xi encouraged graduates to aim high, be down-to-earth, brave difficulties and obstacles, shoulder the mission of the times, integrate their pursuit of ideals into the cause of the Party and the country, and contribute more.

He Boyan was one of the signatories to the letter. After he graduated last year, He, who is from Mianyang, Sichuan, chose to stay in Karamay to work at an oil extraction plant.

"My major was petroleum engineering, so it was natural for me to put what I have learned at university to use," the 23-year-old said.

The plant is located in the Gobi Desert, where temperatures can dip as low as -30 C in winter and rise to more than 40 C in summer, but He said that the harsh environment did not dissuade him from taking the job.

"Many of my co-workers are approaching retirement and they still work tirelessly, so I am in no position to complain," he said.

He hopes to learn to become a skilled oil worker as quickly as possible.

"The others will soon retire and the future is up to us," he said, echoing Xi's comments at a ceremony marking the CPC's centenary on July 1, when he said that the future belongs to the young and hope also rests with them.

In the new era, young people should take on the mission of realizing the great rejuvenation of the Chinese nation, strengthen their ambition, integrity and confidence and rise to the expectations of the times, the Party and the people, Xi said.

In 2017, the general offices of the CPC Central Committee and State Council issued a guideline encouraging more graduates to work at the community and grassroots level, particularly in central and western parts of the country, Northeast China and other less-developed and remote areas.

According to the Ministry of Education, 60 percent of graduates in the past three years have chosen to work in central and western regions.

Chen Shiyu recently graduated from Beijing Institute of Technology with a master's in armament science and technology and will start work at a research institute run by China North Industries Group in Huayin, Shaanxi province.

His job will require him to perform experiments in uninhabited areas in Alshaa League, Inner Mongolia autonomous region, for three to six months each year.

"I think young people should not place too much value on material rewards," the 27-year-old said. "Instead, they should be more down-to-earth, make a difference in their profession and contribute to national development.

"I do not care about the hustle and bustle and convenience of first-tier cities, for me what is more important is a platform to contribute my knowledge and youth."

In 2019, after Xing and her father visited the home of an impoverished villager during her winter vacation, the villager insisted on giving her father seven boiled eggs in a cloth bag.

"It was the first time I saw tears in my father's eyes, and I knew that all the effort made by grassroots officials like him was worthwhile," she said.

Apart from the huge transformation and improvement to villages, the genuine friendship and bond formed with villagers are reward enough, she said.

"Maybe grassroots officials just do small things, but they matter to local inhabitants," Xing said. "By gaining experience in handling small things, we can accomplish something big in the future."