Building a healthy ecology for the digital economy! This important forum was held at BIT!

On the afternoon of July 29, the 2022 Global Digital Economy Conference held a special forum called "Global Governance Rules in the Digital Economy" at the Beijing Institute of Technology.

As one of the sub-forums of the 2022 Global Digital Economy Conference, the forum was co-organized by the Beijing Institute of Technology, the Secretariat of International Commercial Dispute Prevention and Settlement Organization, and Deloitte China. Under the theme of "New Rules in the Healthy Ecology of Digital Economy", the forum was held online and offline, and invited guests from home and abroad to offer suggestions on four topics including the vision of digital economy governance, cross-border flow of data, digital taxation and currency, digital regulation, and digital dispute resolution. International organizations such as the United Nations Conference on Trade and Development, the United Nations Commission on International Trade Law, the Organization for Economic Cooperation and Development (OECD), the International Commercial Dispute Prevention and Settlement Organization, the Accreditation Commission of the Asia-Pacific Arbitration and Conciliation Centre, as well as relevant ministries and commissions of the state, relevant departments of Beijing, colleges and universities, research institutions, industry and news media participated in the forum both on-site and online.

The forum was chaired by Zhang Jun, Academician of Chinese Academy of Engineering and Party Secretary of Beijing Institute of Technology; Wang Guiguo, Dean of Zhejiang University Academy of International Strategy and Law and University Professor of Law, senior professor of liberal arts, member of the national committee of CPPCC; Wang Jian, Academician of Chinese Academy of Engineering and chairman of Academic Committee of Beijing Aviation Digital Economy Research Base. Academician Zhang Jun and Professor Wang Guiguo delivered the opening speech. The opening ceremony and keynote speech of the forum were presided over by Professor Liu Hao, Executive Chairman of the Management Committee of School of Global Governance of Beijing Institute of Technology. In the end of the forum, the closing ceremony was presided over by Wang Ying, Director of International Exchange and Cooperation Department of Beijing Institute of Technology. 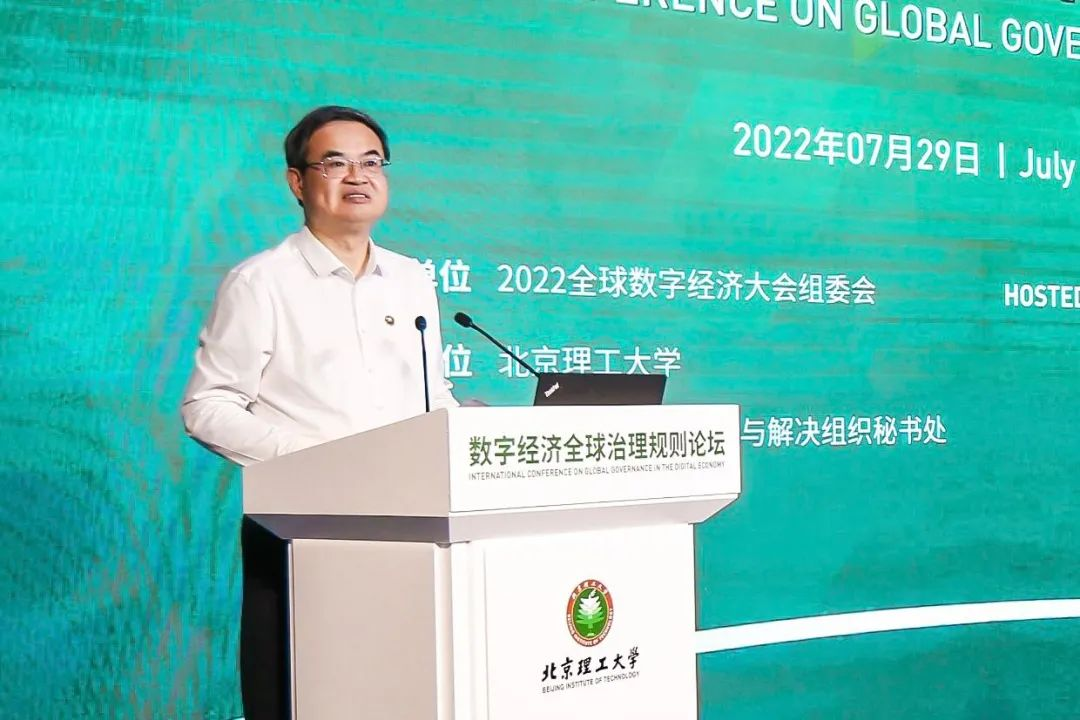 Academician Zhang introduced BIT’s progress in terms of talent cultivation, discipline construction, teaching staff, scientific research and international cooperation, etc. He said BIT has always adhered to features services. BIT has been making extraordinary efforts in building the high-end think tank of global governance, establishing the School of Global Governance. The university has been leveraging its unique strengths in science and engineering to cultivate interdisciplinary talents with global competency and to make contributions to build a community with a shared future for mankind. Zhang said in his speech that the current problems in the international rule-making of digital economy included shortage of global cooperation, fragmentation of institutional rules and regionalization of geopolitics. He also pointed out that we should take General Secretary Xi’s speech and instructions on the development of digital economy as the guidance and accelerate the improvement of the global governance system for the digital economy and build a more healthy and sustainable digital economy. Zhang also shared thoughts on the formulation of international rules for the digital economy from the perspectives of enhancing win-win cooperation, system construction, synergy, inclusiveness and sharing. 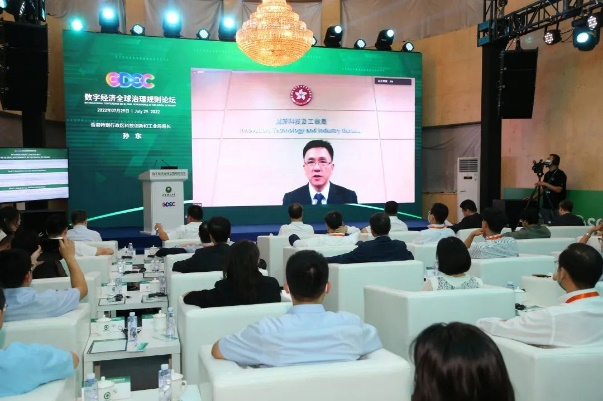 Sun Dong, Secretary for Innovation, Technology and Industry Bureau of the Government of the Hong Kong Special Administrative Region and Shi Jianzhong, Vice president of China University of Political Science and Law, respectively shared their views on the governance rules and practices of the digital economy in Hong Kong, and the construction of laws and regulations of the digital economy. They also expressed their warm congratulations on the opening of the forum. 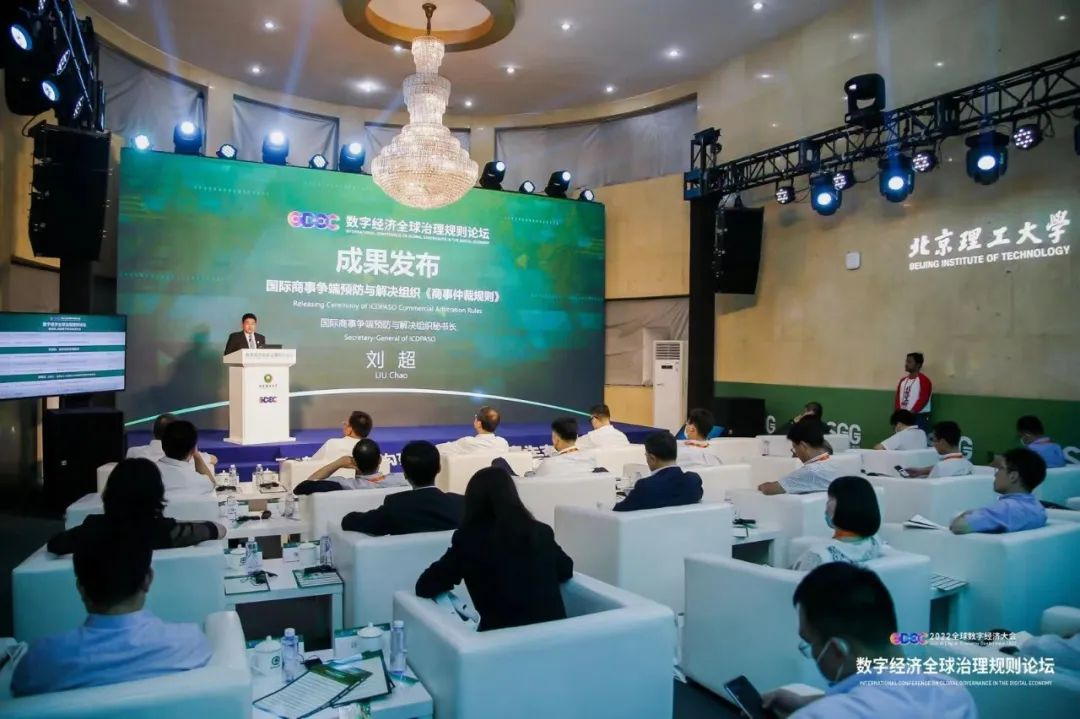 Liu Chao, Secretary-General of the International Commercial Dispute Prevention and Settlement Organization, released the Commercial Arbitration Rules to the world, providing a solution for dispute settlement in the future digital economy.

During the forum, Professor Liu Hao, Executive Chairman of the Management Committee of School of Global Governance of BIT, together with more than 100 scholars, professionals and practitioners from around the world including Professor Wang Guiguo, Dr. Liu Chao, jointly wrote and released the Beijing Declaration on Global Governance of Digital Economy and Ecology. On the basis of broad consensus, the Declaration speaks one voice for improving the global governance system of digital economy and ecology to the whole world, and presents our solutions. It provides strong support for Beijing to build a demonstration city of global digital economy and the formulation and improvement of global rules.

The meeting was attended by major heads of departments and colleges, including International Exchange and Cooperation Department, School of Cyberspace science and Technology, School of Management and Economics, School of Global Governance, School of Humanities and Social Sciences, School of Marxism, Institute for National Development and Security Studies.

Beijing Institute of Technology will unswervingly uphold the vision of a community with a shared future for mankind to unlock the possibilities of the digital economy and nurture the huge potential of new industries, new models and new forms of business. China aims to achieve common resonance with other countries in the planet, and make positive contributions to promoting peace and development of mankind!