In recent years, two-dimensional (2D) materials have attracted widespread attention because of their rich physical properties, especially for the exploration of novel physical properties such as magnetism, superconductivity, topology and excitons at the two-dimensional scale, which makes 2D materials expected to trigger a technological revolution in the frontier fields of electronics, optoelectronic detection, spintronics and quantum technology.

In order to obtain high-quality 2D materials and realize their applications, researchers use a variety of synthetic strategies to achieve the preparation of different 2D materials while studying and regulating their physical properties. The synthesis methods mainly include the conventional chemical vapor deposition method (CVD), MOCVD, molten salt auxiliary CVD, etc. Although the preparation and property of 2D materials have made great progress, there are still great challenges for the controlled growth of transition metal chalcogenides (TMCs) containing the same elements but different compositions, or different phases of the same composition, such as Fe groups, Cr groups, Mn groups, etc. : MX (tetragonal, hexagonal), MX2 (tetragonal, hexagonal), M2X3, M3X4, M5X8 (monoclinic, triclinic), and ternary phosphorus-sulfur compounds (TMPCs). The main reason is that it is difficult to control the growth of a single component/single phase during the preparation process without the appearance of other components/phases. Therefore, how to develop a controllable CVD method to achieve controlled preparation of a single phase/single composition is the key to studying and regulating its physical properties (such as superconductivity and ferromagnetism) and realizing its application.

In view of the above problems, the team of Professor Zhou Jiadong, Professor Wang Yeliang, Professor Yao Yugui of BIT and Professor Liu Zheng of Nanyang Technological University jointly proposed the growth mechanism of competitive reaction kinetics for the first time, which realized the control of nucleation and growth rate of single phases in the chemical vapor deposition process by controlling temperature and vapor pressure, as well as the controllable preparation of 67 kinds of TMCs including different components/different phases (MX, MX2, MPX and MPX3) and TMPCs and their alloys and heterojunctions. Importantly, the realization of Fe-based composition and phase engineering opens up new possibilities for the study of Fe-based spintronics, as well as Majorana zero-energy models based on Fe-based superconductors. The first direct preparation of CVD of phosphorus-sulfur compounds provides a material basis for further study of their antiferromagnetic properties and devices. This is another universal preparation strategy after the universal growth method for two-dimensional material libraries developed in 2018 (Nature 556, 355 (2018)). The results were published in Nature Materials on June 23rd under the title of "Composition and phase engineering of metal chalcogenides and phosphorous chalcogenides".

The details are as follows. Taking the preparation of Fe-based compounds as an example, Fe-based sulfur binary compounds commonly include FeX and FeX2, and FeX and FeX2 include tetragonal phases and hexagonal equals; Ternary phosphorus-sulfur compounds also include different compositions such as MPX, MPX3 and etc. During nucleation growth, different compositions and phases compete with each other. At the same time, the growth process of ternary MmPnXz is more complex, and its chemical reactions include binary reactions (MaXb, McPd and PX) and ternary reactions. The preparation of MmPnXz not only needs to control the reaction of ternary component growth, but also needs to avoid the formation of binary MaXb, PX and McPd. In addition, some MaXb and MmPnXz have a non-layered structure, and non-layered epitaxial growth and island growth patterns will compete with each other so as to obtain atomic layer thickness of two-dimensional materials, with the need of controlling the reaction according to the epitaxial growth mode. 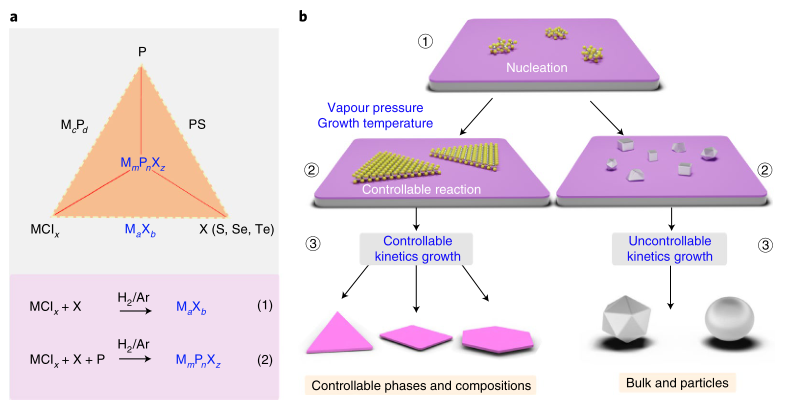 Figure 1. Kinetic growth modes for the controllable synthesis of MaXb and MmPnXz with different phases and compositions

The traditional growth methods focus on increasing the vapor pressure of the precursor to promote the production of products. However, this strategy makes it impossible to achieve controlled preparation of a single component/phase by reacting and competing with each other at high temperatures. In order to meet the above challenges, it is necessary to meet the growth of only one component/single phase by regulating the chemical reaction process. The research team pioneered a kinetic growth mechanism based on competitive reactions, using large-sized metal chlorides as precursors to achieve the regulation of vapor pressure, and then to regulate its temperature with S/Se/Te to achieve the growth of a single pure phase. 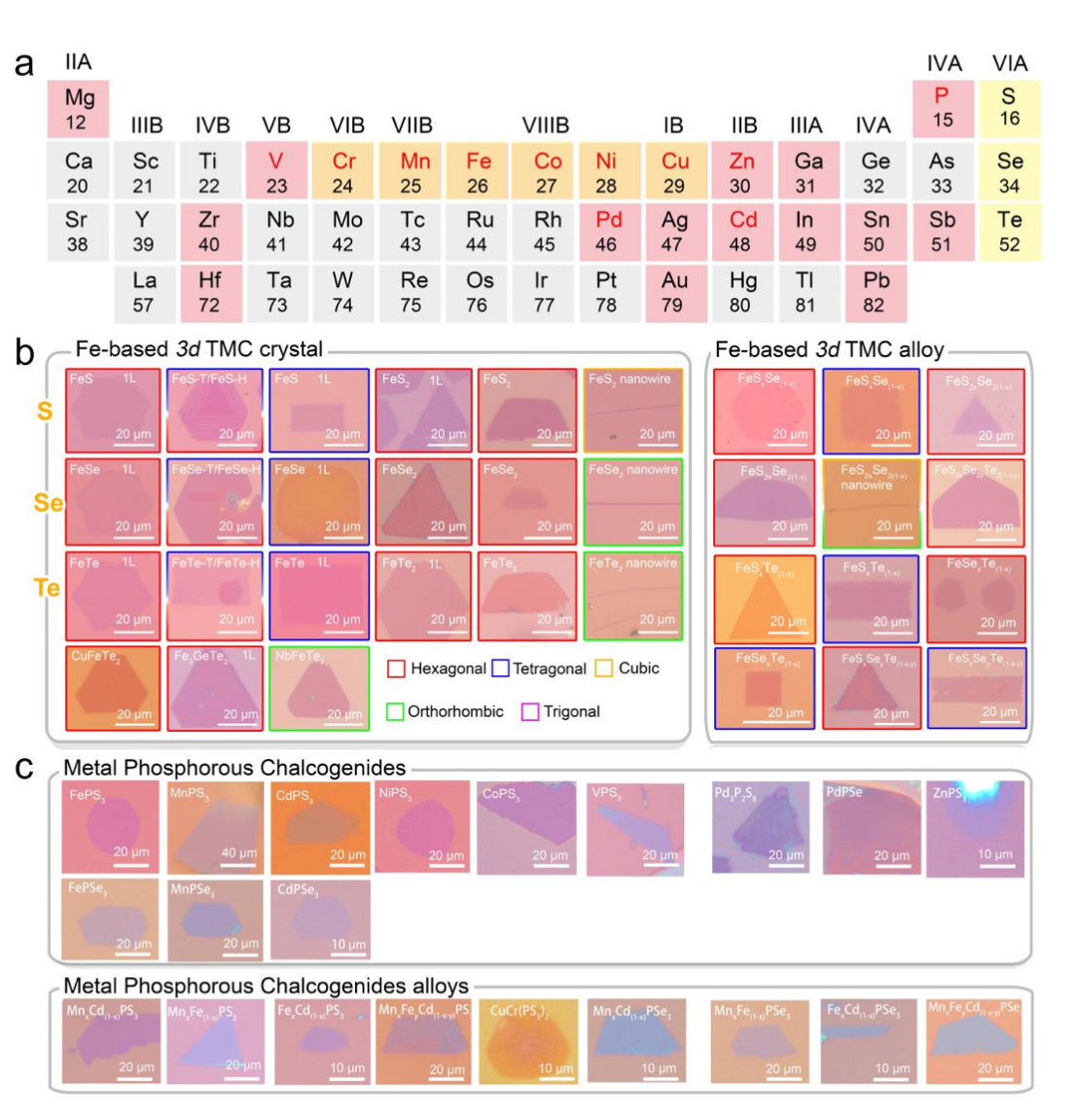 Based on this mechanism, the team successfully synthesized more than 60 types of 2D materials, including 30 TMCs and 21 TMPCs. Most materials, especially TMPCs, have never been reported to be synthesized by the CVD method. In addition, by extending the method, the team also successfully synthesized other ternary transition metals based on different phases (such as Cr, Mn and Cu) sulfur compounds, further demonstrating the universality of the growth method. 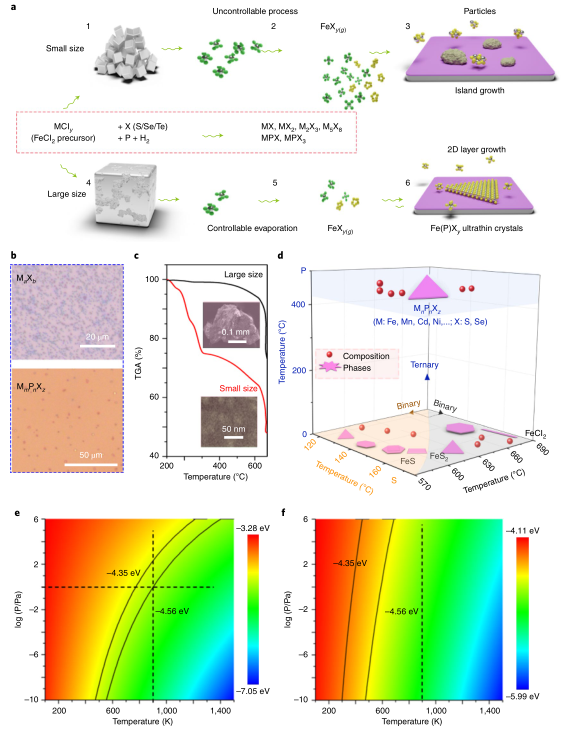 Figure 3. Growth mechanisms for 2D materials based on 3D metals

Analysis of the size mechanism of the precursor: small size FeCl2 is used during the growth of traditional CVD, while small size FeCl2 vapor pressure is higher, which is uncontrollable in reaction kinetics. In order to control the growth kinetics and achieve specific chemical reactions, different from the conventional chemical vapor deposition preparation method, the large size of FeCl2 is used as a precursor, which can control the vapor pressure of the reactant, and then control the chemical reaction of a single phase to achieve the growth of 2D materials. In this way, the formation of the growth of different phases of specific materials can be adjusted. Further by controlling the reaction temperature, the controllable preparation of different compositions and phases of the substance is realized, thereby obtaining ultra-thin two-dimensional crystals. 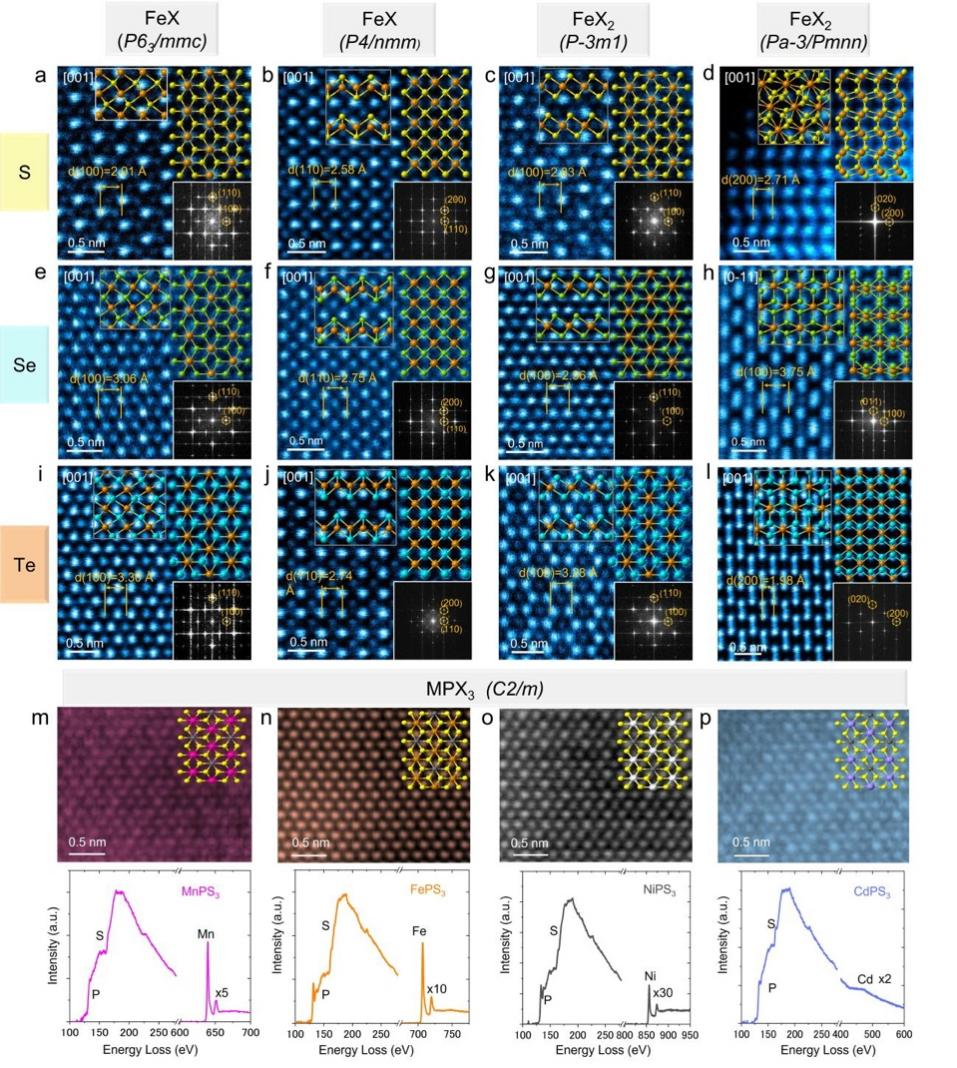 Figure 4. STEM characterization of the as-synthesized 2D TMCs and TMPCs

Based on the comprehensive analysis of experimental and simulated Z-contrast STEM images, EDS mapping and EELS results, most of the iron-based sulfur compounds and TMPCs prepared belong to 5 different spatial point groups, which can be divided into 5 categories: (1) P63/mmc (non-layered hexagonal/triangular FeX); (2) P4/ nmm (layered square FeX); (3) P3 ̅m1 (hexagonal/triangular/trapezoidal layered FeX2); (4) Pa3 ̅ (non-layered FeS2 nanowires) and Pmnn (non-layered FeS2 and FeTe2 nanowires); (5) C2/m (MPX3, M = Mg, V, Cr, Mn, Fe, Co, Ni, Ag, Cd or Zn). Taking MPX3 as an example, structurally, the cells of the monolayer MPX3 are composed of a dumbbell-shaped P2X6 and two M atoms, forming a honeycomb-like structure in which each M atom is coordinated with six X atoms, and each P atom is coordinated with one P and three X atoms. When stacked vertically, the interfacial displacement between MPX3 layers breaks the triple inversion rotational symmetry, resulting in a single oblique lattice belonging to the C2/m space group.

Stem-ADF images present a six-fold symmetrical lattice along the [103] band axis, consistent with the hexagonal single-layer and single-oblique stacking features of the multilayer MPX3. In addition, the elemental composition of MPX3 was determined by the EELS spectra of the corresponding samples Mn L2,3-sided, Fe L2,3-sided, Ni L2,3-sided and Cd M4,5-sided. 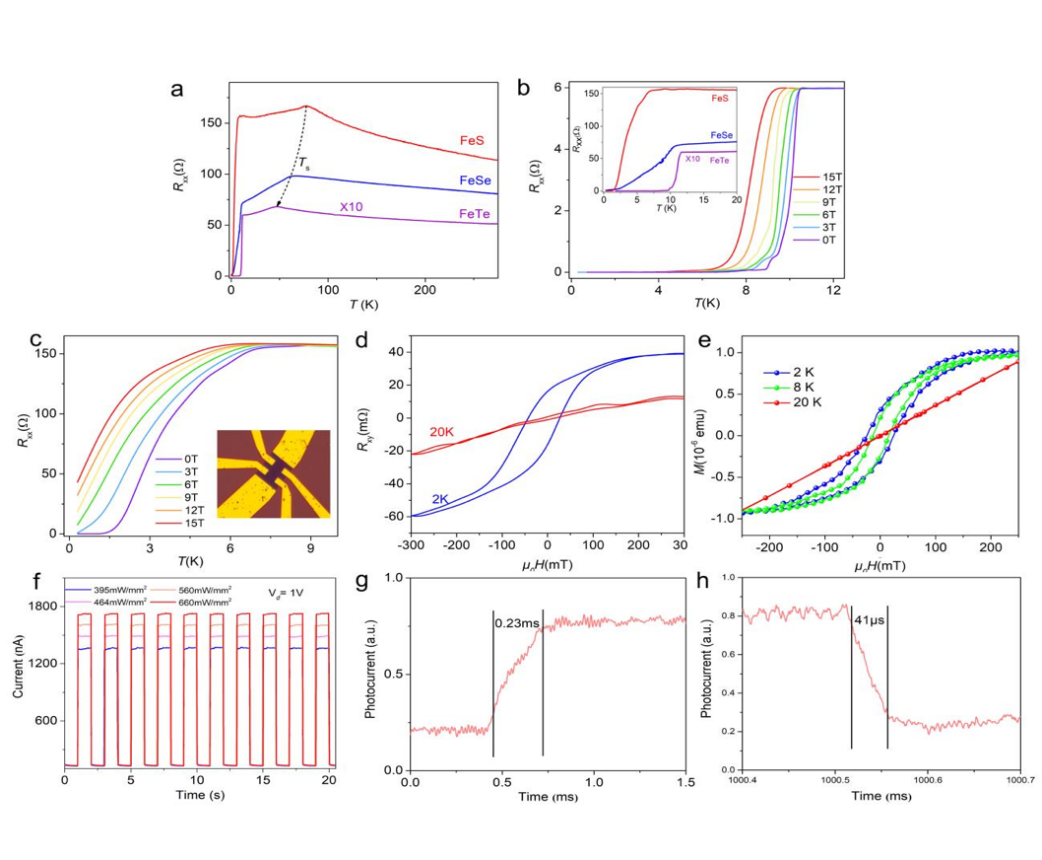 More importantly, these two-dimensional materials exhibit novel physical properties, making them an emerging platform for basic research and practical applications. Studies have shown that tetragonal FeX exhibits superconducting properties. The superconducting transition temperature tc values for FeS, FeSe and FeTe are 3.3, 7.3 and 11.0 K, respectively, unlike FeX, FeX2 (FeS2) exhibiting ferromagnetic properties with a Tc value of about 15 K. In addition, the FeTe2 infrared detector responds better than most of the two-dimensional materials that have been reported. This shows that the two-dimensional materials of different compositions synthesized have high quality, which provides a platform for further study of physical properties and the construction of heterogeneous structures such as ferromagnetic/superconducting junctions.

The work not only opens up a new avenue for the synthesis of atom-thin TMCs and TMPCs, but also demonstrates a novel growth mechanism that is important for a comprehensive understanding of the growth mechanism of two-dimensional materials. Crystals with controllable phases, compositions and heterostructures prepared based on the proposed strategy will provide the possibility to explore physical phenomena including two-dimensional phase transitions, two-dimensional ferromagnetism, two-dimensional superconductivity, Majorana bound states, and multibody excitons.

This work has been supported by the Key R&D Program of the Ministry of Science and Technology, the National Natural Science Foundation of China, the Overseas High-level Talents Program and the Beijing Institute of Technology Innovation Fund.