Beijing Institute of Technology, August 7th, 2021: Recently, researcher Chen Yuhui from School of Physics in Beijing Institute of Technology (BIT), a young teacher of Professor Zhang Xiangdong’s research group, has collaborated with researchers from Victoria University of Wellington, University of Otago, Peking University, and Westlake University. Based on the composite system of surface plasmon optical cavity and two-dimensional (2D) semiconductor tungsten disulfide, through the use of the strong coupling effect between light and matter, in experiments the high-efficiency hot electron doping of tungsten disulfide has been achieved, which has greatly changed the original bandgap of tungsten disulfide. The relevant research results have been published in the international top journal Nature Communications.

Energy band theory is one of the important foundations of semiconductor technology. The fine regulation of the energy band has triggered many technological revolutions, including not only cutting-edge technologies such as diodes, triodes, large-scale integrated circuits and lasers, but also solar cells, CCD, and other applications closely related to our daily life. Therefore, developing new ways to achieve more effective bandgap adjustment has always been the focus of semiconductor research.

Traditionally, we can change the charge environment in a semiconductor to realize the change of bandgap by chemical doping, applying voltage, or optical pumping. In our recent work, we have found that strong coupling effects between light and matter can be achieved if the two-dimensional semiconductor tungsten disulfide is placed in a nanoscale surface plasmon optical resonator. Thus, a hybrid state of half-light and half-matter is formed. When the system is in such a hybrid state, the energy will be coherently transferred back and forth between the tungsten disulfide and the surface plasmon cavity many times. Therefore, the system will have the physical properties of both semiconductor and optical cavity. Whenever the energy of the hybrid state is in the form of surface plasmons, the free electrons in the metal will be stimulated to higher energy by the plasmons, forming what we call the hot electrons. These hot electrons with high energy can cross the barrier potential and be injected into the two-dimensional semiconductor, resulting in the renormalization of the bandgap structure of tungsten disulfide. In this process, both the generation of hot electrons in the metal material and the injection of hot electrons into the semiconductor are accompanied by the coherent transfer of energy between the surface plasmons and the tungsten disulfide. Therefore, we call such a doping process the coherent doping process.

Based on the technological ideology, we prepared the silicon dioxide photonic crystal by self-assembly method and the surface plasma photonic crystal cavity by evaporating the silver metal film on its surface. Then the two-dimensional semiconductor tungsten disulfide was transferred to the surface of the photonic crystal. Further, we observed a shift of 550 meV in the tungsten disulfide bandgap at room temperature by using a femtosecond pulse with a central wavelength of 400nm and a power of 12 μJ/cm2. Compared with the traditional optical pumping method, the doping effect is enhanced by two orders of magnitude (previous experiments required 3400μJ/cm2 to see similar bandgap renormalization [Nat. Photonics 9, 466-470 (2015)]). 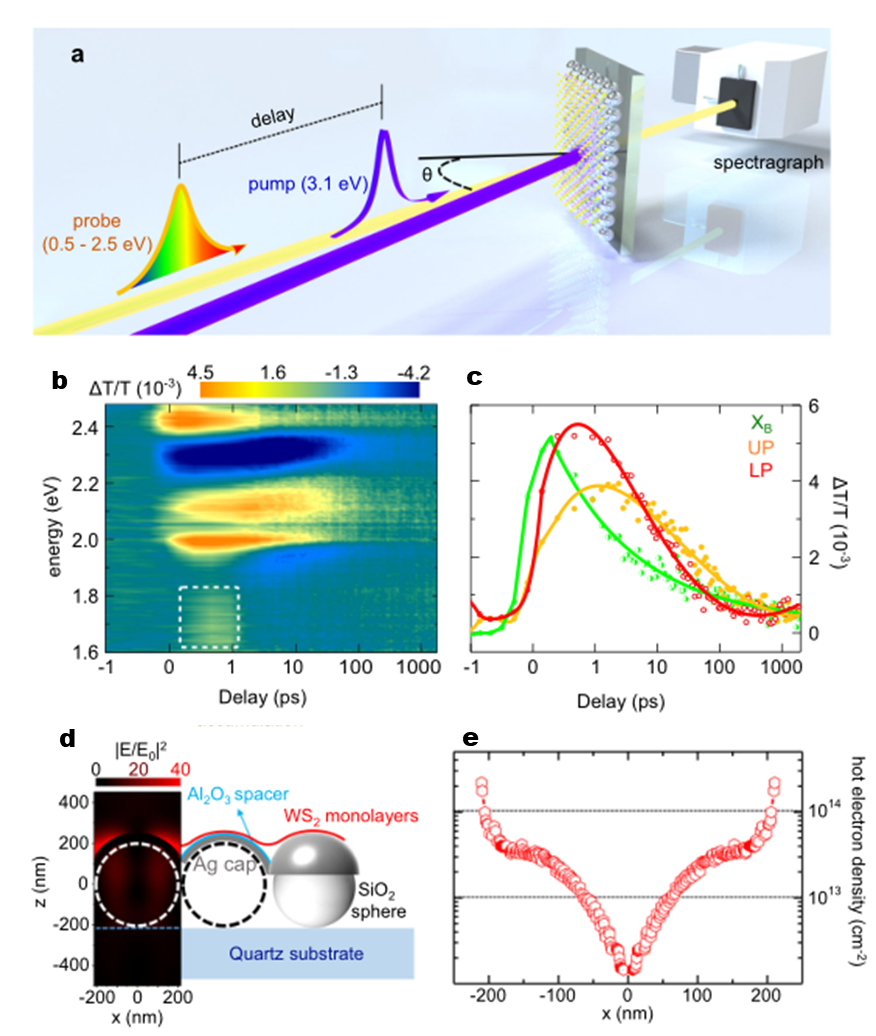 Figure 1. (a) Diagram of experimental apparatus. (b) Transient absorption spectra of a composite system composed of surface plasmons and two-dimensional semiconductors. Due to the strong coupling effect, the absorption peak of tungsten disulfide originally located at 2.1eV splits into two absorption saturation peaks. Bandgap renormalization results in a new optical gain peak at 1.6 eV. (c) Decay curves of excitons and polarons in the system. (c) and (d) The spatial distribution of field enhancement and hot electron concentration in the structure.

BIT is the first unit of this work. Researcher Chen Yuhui from the School of Physics, and RannieTamming from Victoria University of Wellington are co-first authors of this work. Professor Ding Boyang from the University of Otago, and professor Qiu Min from Westlake University are co-corresponding authors of this paper. This work was supported by the National Natural Science Foundation of China (NSFC), the BIT Academic Start Plan for Young Teachers, and the BIT Young Science and Technology Innovation Program.