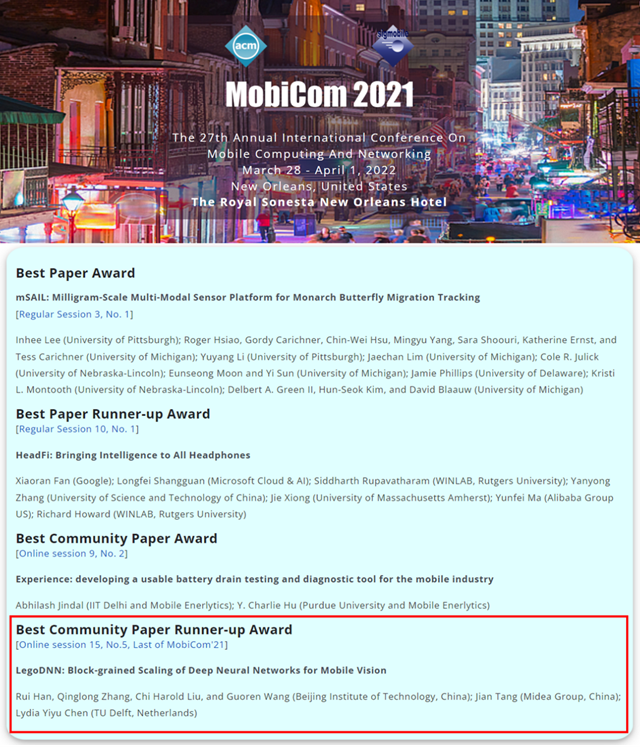 Recently, ACM MobiCom 2021, the top conference of CCF-A, announced the best paper award. The team of Prof. Wang Guoren, Prof. Liu Chi and Associate Prof. Han Rui from School of Computer Science and Technology, BIT won the Best Community Paper Runner-up Award. This is the third time in 27 years that a mainland Chinese research team has won the award as first author. MobiCom is one of the most difficult and influential international academic conferences in the field of mobile computing and computer networks, and has high impact in both academia and industry. 299 valid submissions were received for MobiCom 2021, and four best paper awards were given, which is only 1.34%. The main author of the paper, Zhang Qinglong, completed this work as an undergraduate student in his senior year and was awarded the Outstanding Undergraduate Design in Beijing in 2021, and is currently pursuing his master's degree under the supervision of Associate Professor Han Rui.

The winning paper is entitled "LegoDNN: Block-grained Scaling of Deep Neural Networks for Mobile Vision". With the explosive growth of the number of edge devices such as smartphones and the development of artificial intelligence technologies, deep neural networks are widely deployed in edge devices. However, the processing of data by deep neural networks requires a large amount of resources, which runs counter to the limited performance and energy characteristics of edge devices. The multi-application scenario makes resources even more scarce and fluctuating, exacerbating the paradox. In this paper, they cleverly combine Lego blocks with deep neural networks (DNN) and propose the LegoDNN framework: the original deep neural network is divided and transformed into multiple mutually compatible "blocks", and a part of the blocks can be selected to make up of a usable derived model. The phenomenon of "combinatorial explosion" makes it possible to combine thousands of different derived models with a small number of blocks, improving the efficiency of derived model generation. When the available resources change, LegoDNN only needs to replace some blocks in the current model to transform it into one more suitable for the current scene with a low cost. Numerous experiments on real machines show that LegoDNN outperforms several baseline methods in terms of accuracy and energy consumption, and is widely applicable to different deep neural networks, edge devices and application scenarios. 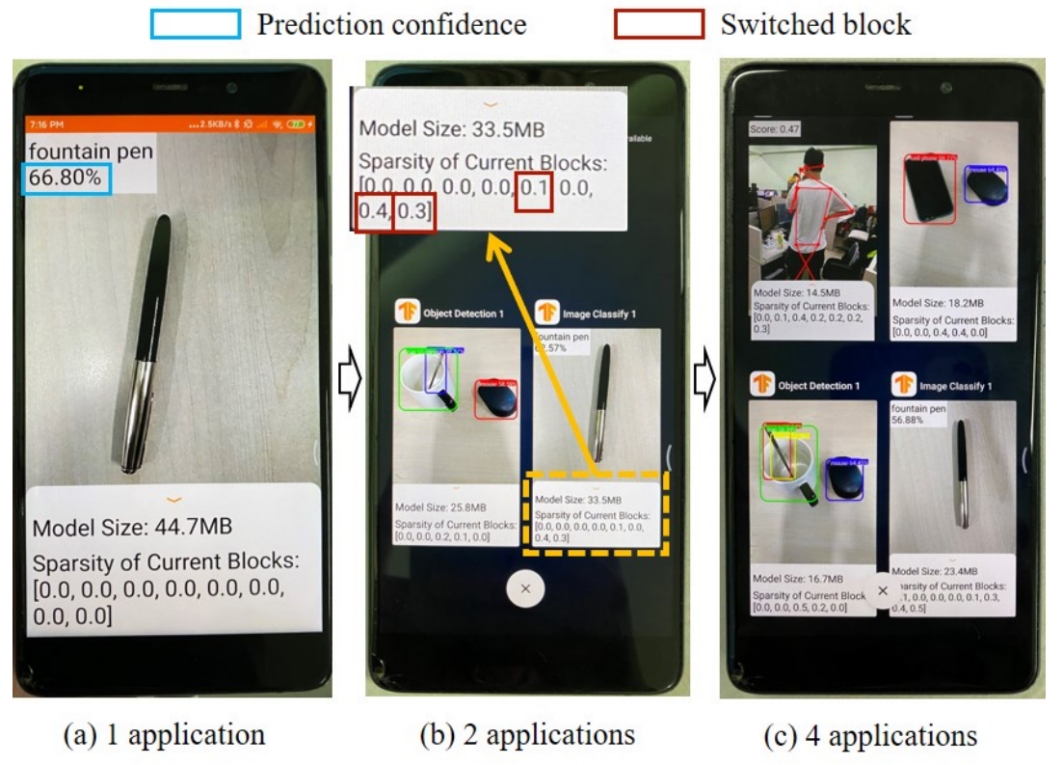 Han Rui, pre-appointed associate professor and doctoral supervisor in the School of Computer Science and Technology, BIT, core member of National Engineering Laboratory of Big Data System Software and Beijing Key Laboratory of Intelligent Information Technology. He graduated from Tsinghua University in 2010 with a Master's degree and was awarded the Outstanding Master's Graduate, and graduated from Imperial College London in 2014 with a Ph.D. His main field of study lies in the edge intelligence technology. In the past five years, he has published 17 papers (9 first-authored) in CCF-A conferences / journals, and hosted the National Natural Science Foundation of China (NSFC) surface / youth projects.

Liu Chi, the vice dean, professor, and doctoral director of the School of Computer Science and Technology, BIT, the director of Beijing Key Laboratory of Intelligent Information Technology, the recipient of National Excellent Young Scientist Fund, the chief scientist of National Key Research and Development Program, and the member of Chinese Institute of Electronics. He received B.S. and Ph.D. degrees from Tsinghua University and Imperial College London respectively. His main field of study lies in the intelligent IoT technologies. He received the first runner-up of the best paper in KDD'21, and the first, second and third prize each at provincial and ministerial level. He has trained a number of students who won the excellent undergraduate design thesis in Beijing and the excellent master thesis in China Electronics Society.

Wang Guoren, the dean, professor and doctoral director of School of Computer Science and Technology, BIT, member of the Discipline Review Group of the State Council, distinguished professor of Changjiang Scholars, and recipient of National Outstanding Young Scientists Fund. He was selected as a national candidate for the National Hundred Million Talents Project and awarded the honorary title of "Young and Middle-aged Experts with Outstanding Contribution". He received his B.S., M.S. and Ph.D. degrees in computer science from Northeastern University. He received 10 provincial and ministerial science and technology awards, including the Second Prize of National Science and Technology Progress, the First Prize of Liaoning Provincial Science and Technology Progress, the Second Prize of Natural Science of the Ministry of Education, and the Second Prize of Natural Science of Liaoning Province.