【Person Profile】Jiang Yang: Build a Bridge Between Science and Humanity 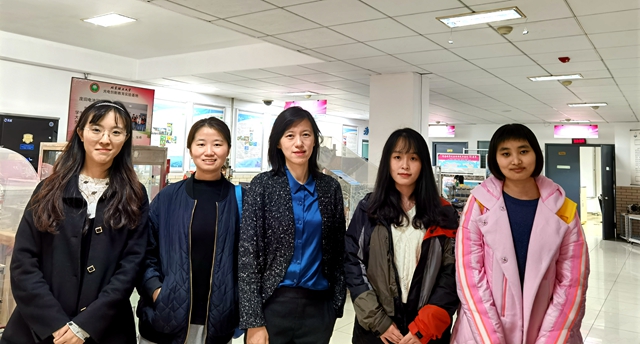 Jiang Yang's undergraduate major is not Humanities and Social Sciences, but Applied Mathematics. Jiang Yang said that the reason why she switched to the philosophy of science and technology, which is regarded as a less popular major from outsiders, stemmed from the pursuit of the academic ideal of "communicating science and humanities". In 2010, Jiang Yang graduated from Tsinghua University with a doctor degree and came to BIT for teaching.

“Human society has been deeply influenced and shaped by modern science and technology, and my teaching and scientific research have always focused on how to deal with the relationship between modern science and technology and the world we live "Jiang Yang has spent ten years in providing a course called Introduction to Dialectics of Nature for science and engineering postgraduates. In the face of nature, what is the basic presupposition of science? How does scientific methodology in the sense of philosophy guide specific scientific research? Is science benefit free and value neutral? Should scientists be responsible for the social impact of their research results? The content of Jiang Yang's curriculum is rich and closely linked. Through the raising, discrimination and expansion of problems, students are guided to think deeply. "We should examine and think about science and the relationship between science and technology and human society from the perspectives of history, philosophy and social science."

Introduction to Dialectics of nature Nature sounds like a very boring and dull course for many students. But in Jiang Yang's class, students will change this view, and even some students are attracted to audit the class. "It's a pleasure to attend Prof. Jiang's class." , “Prof. Jiang's class can make me think deeply.", "I have learned to cognize and comprehend science from a new perspective, and my mind and vision towards problems have also been broadened.", "Although the course is short, it opens the mind to us.". Many students who have taken Introduction to Dialectics of Nature feel benefited a lot.

Behind these evaluations is Jiang Yang's profound and solid academic foundation and unique teaching charm, as well as her dedication and sincere love for teaching through ten years. No matter how many difficulties she encounters in her life, as long as she stands on the platform, Jiang Yang will always be full of enthusiasm and passion. Even after the operation, she insisted on teaching with high quality on the platform. At the end of each semester, she bows to the students to express her gratitude. "Revere the platform and respect the students," she said, “which is a principle that teachers must abide by.”

“The output of values is an important connotation of ideological and political theories teaching in all courses.” As the Party branch secretary of the Institute of Science, Technology and Society at School of Humanities and Social Sciences, Jiang Yang actively plays the leading role in demonstrating and highlighting the ideological and political theories teaching in all courses. For example, History of Science and Human Civilization, which is taught by Professor Jiang Yang, discusses the historical evolution of science. But it is actually based on the current Chinese society, interprets the confusion of the times and responds to the concerns of the times. " All history is contemporary history", Jiang Yang focuses on guiding students to deeply understand the unique tradition of knowledge and natural exploration of ancient China, then reflect on contemporary scientific and technological issues, which contribute to the thought about how Chinese cultural tradition contributes wisdom resources to contemporary scientific and technological innovation. She believes that to enhance students' cultural self-confidence, we should let students understand our own culture first.

To explore the essence of science and let more people understand science with humanistic vision and feelings is Jiang Yang's academic pursuit. "Peach/plum blooms need not blow their own horns, and spontaneously sightseers come to them in droves. " The students who audited in her class at that time are now young scholars who have made great achievements in the field of science; the graduate students under her guidance have also entered Tsinghua University and University of the Chinese Academy of Sciences for further study. It is believed that her students will always be deeply influenced by Jiang Yang's questioning of science.