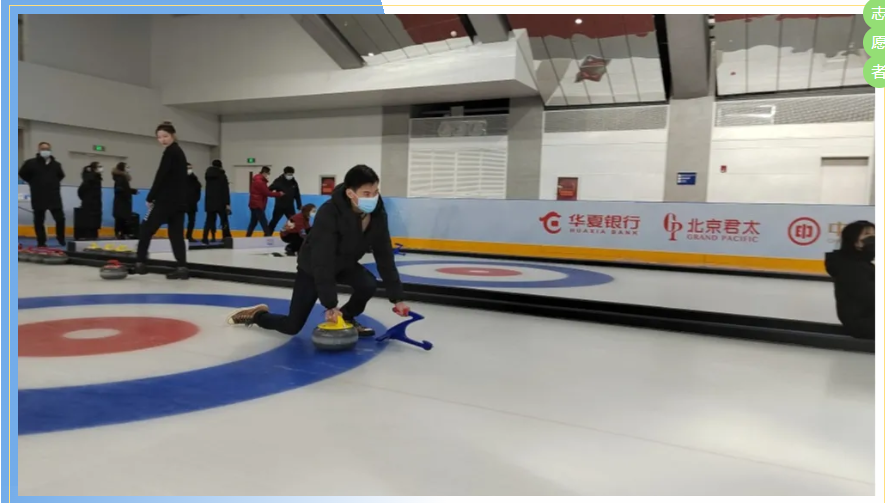 The cultural blood of "Chinese sons and daughters" calls her from afar. Crocodiles, tropical "jerboa", frogs in the small river and the sound of waves crashing against rocks outline Xie Huishan's impression of her hometown. Later, she went to study in Chongqing, and in the crowd, she watched an unforgettable Olympic opening ceremony on the big screen. Later, she came to Beijing, where the Olympic Games were held. Snowflakes fell from the sky above the "city of double Olympics", spreading a vast world in front of her eyes.

Together with Xie Huishan, there are 27 Chinese students studying in Beijing universities. They come from 14 countries including the United States, the United Kingdom, Japan, Brazil and Malaysia, study in 8 schools such as Peking University and Tsinghua University, and will provide voluntary services in 10 Beijing Winter Olympic venues such as "Bird's Nest", "Ice Cube" and "National Speed Skating Oval".

They have a common name - the overseas Chinese games volunteers for the Beijing Winter Olympics. 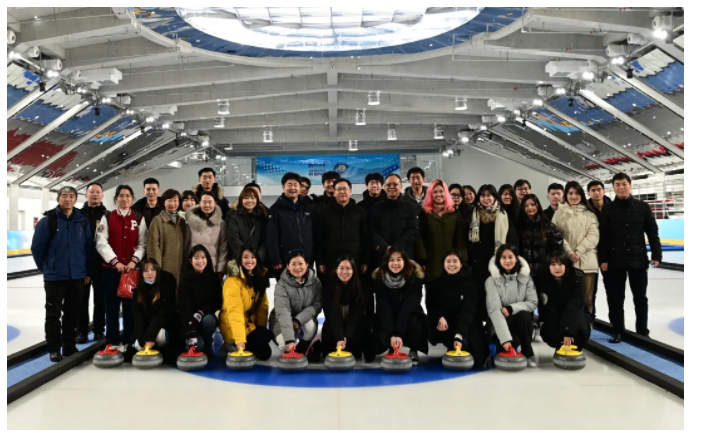 28 Chinese students studying in 8 universities including Peking University and Tsinghua University come from 14 countries including the United States, Britain, Japan, Brazil, and Malaysia. After strict and meticulous training, they will stay at 10 Beijing Winter Olympics venues including the "Bird's Nest", "Ice Cube" and "National Speed Skating Oval" from February 4th to 20th, 2022, providing volunteer services for athletes, spectators and of media reporters.  Picture provided by the interviewee

The beginning of a dream

As far away as West Kalimantan, Indonesia, Xie Huishan lives in Chinatown. There is no difference from the hometown in southern China. Dragon boat racing, making zongzi and eating moon cakes on the Mid Autumn Festival. There is also the reunion dinner on New Year's Eve, where there is always a whole fish, which means "there is always more than we wish for"; on the first day of the new year, firecrackers are set off to greet the elders. Every household has a pot of plum blossoms, hung with gold coins and red packets.

Xie Huishan is a third-generation immigrant. When she was in Indonesia, her family only spoke Hakka, not Mandarin. Her parents have never been to China and cannot write Chinese characters. When she first arrived in China, she had to learn everything from scratch.

"It's very difficult. I've been making up exams for the first two years." Xie Huishan still sighs when she recalls her undergraduate experience in journalism at Chongqing Normal University. Adapting to the language, adapting to the weather, and adapting to the Chongqing dialect suddenly brought out by the teacher in his lectures. She always spends much more time than others to study, and she also spends winter and summer vacations studying. That was in 2006, the Internet was not very developed, and the learning content could only be written down with pen. When the exam schedule was tight, she had to get up at 4 in the morning to review.

But that time in university left a flash of memories for Xie Huishan, and also buried her desire to participate in the Olympics in her heart.

During the 2008 Beijing Olympic Games, the melody of "Beijing Welcomes You" was everywhere, Xie Huishan and her classmates huddled in front of the big screen in the library to watch the opening ceremony, "It's spectacular, I feel that grand and great scenario. While watching, the students called together, and I became active. " As far away as in Chongqing, Xie Huishan couldn't participate in the Olympic Games. At that time, she was thinking, when will she have the opportunity to participate?

Now, Xie Huishan, a graduate student in Beijing, has an unexpected encounter with the Winter Olympics. For her, it was "an opportunity not to be missed". 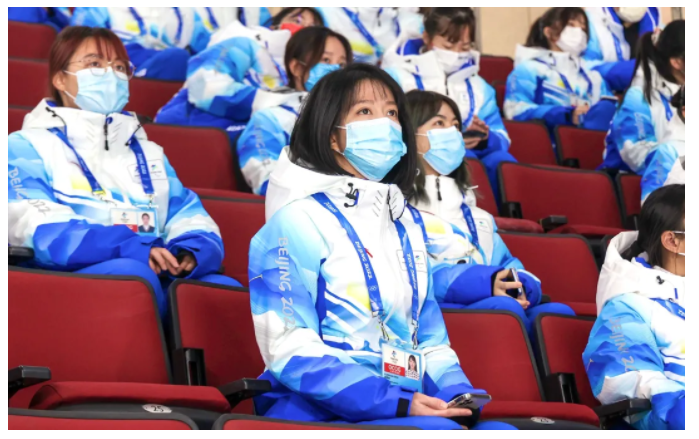 On January 25, 2022, Xie Huishan accepting training at the Wukesong Gymnasium.  Picture provided by the interviewee

In addition to Xie Huishan, 27 Chinese students from universities in Beijing also participated in the volunteer service of this Winter Olympics.

Yang Wei, an international student, feels very lucky. During the Beijing Winter Olympics, he and his fellow volunteers from Beijing Institute of Technology will provide volunteer services at the Wukesong Ice Hockey Sports Center.

A semi-circular field with four corners is divided into an offensive area, a central area and a defensive area, surrounded by boundary walls. Standing on the ice rink, Yang Wei felt familiar. He's been playing ice hockey since he was seven or eight years old, and usually, he'd be standing at the front right of the team, an offensive position, wearing double-edged skates, speeding, turning, passing, shooting, and scoring.

Yang Wei's father is from Datong, Shanxi, and his mother is from Chongqing. They studied for a master's degree in the United States and settled in New Jersey. Yang Wei went to the United States with his parents when he was less than two years old. Unlike the surrounding people, there are always lanterns hanging at the door of Yang Wei's house throughout the year. Every Spring Festival, his parents take Yang Wei and his younger brother to Chinatown to play with Chinese friends. There are gold and red dragon and lion dancing on the street, "especially with a Chinese feel."

After receiving the notification of the selection of volunteers for the Winter Olympics, Cen Guanhao, an international student, turned on his computer and watched the 2008 Beijing Olympic Games in full from the opening ceremony. He felt moved somewhere in his heart, and a lot of emotion came up.

He likes to stay in China, where he is no different from the people around him. When he returned to China to go to university, his Chinese proficiency test was level 6, the highest. And three years later, the Spanish that he has spoken for many years is almost forgotten.

When the Beijing Olympic Games were held, Cen Guanhao was having a summer vacation. He and his grandmother watched the opening ceremony in his hometown of Jiangmen, Guangdong. A picture roll slowly unfolded on the TV screen, and gorgeous fireworks rose from the Bird's Nest, making the night as bright as day.

After the Olympic Games, he followed his father to Beijing and walked around the Bird's Nest and the Water Cube. He thought to himself, when can he go to the Olympics to see it? Now, the dream will soon come true. 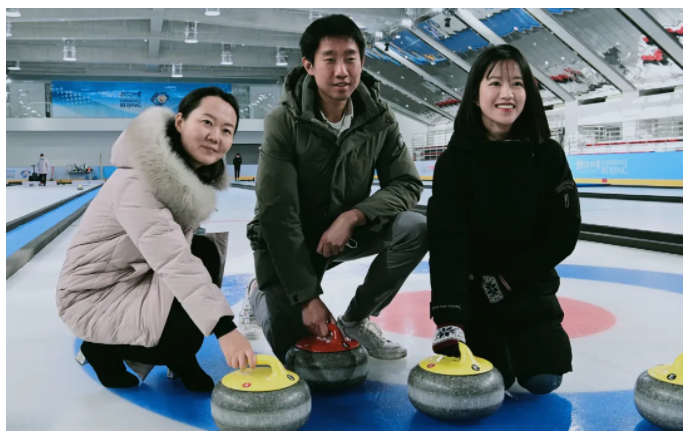 My participation in the Winter Olympics

As a volunteer, in addition to understanding the various competition events of the Winter Olympics, it is also necessary to master the etiquette, customs and medical first aid knowledge on the field.

Cen Guanhao will be responsible for the press reception of various countries at the Big Air Shougang. He and other volunteers in the university participated in the training courses carried out by the Winter Olympics Organizing Committee. In the morning, the volunteers learned some basic knowledge such as etiquette, medical care, and assistance for the disabled. In the afternoon, they conducted practical exercises. Professional teachers lead simulations of unexpected situations that may occur during the Winter Olympics.

In addition, the training courses for volunteers also cover project setting, basic sports knowledge, cultural life knowledge, legal knowledge, general knowledge of volunteer service, psychological knowledge and skills. For example, when facing the Winter Paralympic athletes, don't have to be too proactive. Before helping him or her, ask: Do you need help?

Due to the requirements of COVID-2019 prevention and control, volunteers often use a special gesture to replace handshakes and hugs. The middle and ring fingers of the right hand are bent, and the palm is pressed against the left shoulder. This gesture is called "my participation in the Winter Olympics".

The last step to become a qualified volunteer is to pass a strict answering assessment, covering the daily use of English, relevant regulations on COVID-2019 prevention, venue distribution, cardiopulmonary resuscitation and some medical first aid knowledge. After nearly a month of training, 28 volunteers for the Beijing Winter Olympics Overseas Chinese Games are full of confidence.