Professor Huang Qiang and Associate Professor Wang Huaping from the Beijing Advanced Innovation Center for Intelligent Robots and Systems, Beijing Institute of Technology have made important progress in the field of micro-nano robot and biomedical engineering. On January 18, the research achievement "Ionic shape morphing micro robotic end effectors for environmentally adaptive targeting, relaxing, and sampling" was published online in Nature Communications as a Research Article. This achievement is the first to realize the self-shape-morphing of the micro robot in the environment perception with a single biodegradable biomaterial, thus solving the problem of the integration of non-invasive sampling, transportation, delivery and recycling of the micro robot in the closed living environment such as human body, which will have far-reaching significance in the field of precision medicine for major diseases such as cancer.

Professor Huang Qiang and Associate Professor Wang Huaping from the Beijing Advanced Innovation Center for Intelligent Robots and Systems and School of Mechatronical Engineering are corresponding authors of the article, and Dr. Zheng Zhiqiang is the first author. Professor Shi Qing and Professor Dong Lixin participated in the research work throughout. Beijing Institute of Technology is the only authority that completed the article. 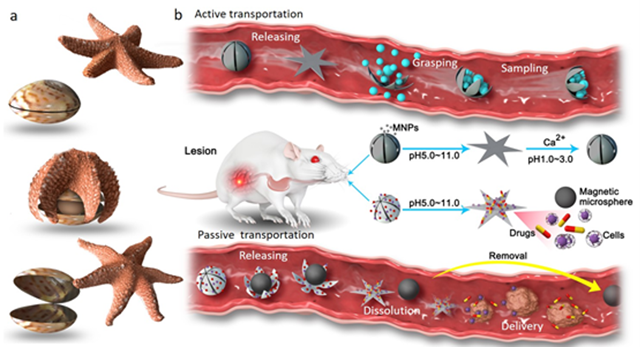 Facing the reality of the increasing incidence of cancer, scientists have been committed to the development of micro-robots to replace traditional surgery, to achieve functions such as non-invasive pathological sampling and precise drug delivery, and to provide patients with safer, more direct and effective treatment methods. At present, the movement and morphing of micro-robots are mostly realized by remote control of artificial driving force and morphing stimulus source. The whole process needs to monitor the position and state of the robot in real time to confirm when and where to send morphing instructions to carry out operations. In view of the limitations of real-time monitoring methods and feedback information of living environments such as the human body, the development of intelligent micro-robots with self-morphing functions is of great significance for effectively reducing human intervention and greatly improving the feasibility and flexibility of living operations.

The team found that the alginic acid hydrogel has different local densities after heterogeneous electrodeposition cross-linking and curing, and it can be further cross-linked or decomposed by changes in ion concentration and pH value to accumulate local strain. The overall structure is morphing and opening and closing. Since ions and pH are both natural environments in humans and other living organisms, this discovery inspired the team to develop a self-morphing micro-robot with biological environment perception.

Inspired by the movement process of starfish preying on shellfish, the team built a starfish-like micro-robot with this heterogeneous hydrogel, so that its flexible tentacles can effectively conform to the outer contour of any target with self-morphing in a liquid environment for grasping and freed. Through non-uniform electric field cross-linking and curing, hydrogel networks with different densities are embedded in the alginic acid monolayer film structure of the imitation starfish micro-robot. After the micro-robot enters the human digestive system, it can sense self-morphing of the pH environment (stomach pH: 1-3, intestinal pH: 6-8).

The imitation starfish micro-robot can imitate the various driving modes of the starfish. For example, by capturing magnetic microspheres, passively move with the magnetic ball under the action of a magnetic field in the form of a "free ride", or by encapsulating magnetic nanomaterials in the robot body to achieve active magnetic drive movement. Finally, after reaching the target area, different tasks such as attachment, delivery, and sampling can be completed through self-morphing adjustment. This new microrobot constructed from a single hydrogel material is also fully biodegradable, and can solve the problem of recycling after completing operations in a closed living environment.

Through the effective use of this customized embedding strategy of hydrogel networks, the team will continue to explore the tailoring technology of a single-layer self-morphing microrobot structure with arbitrary shapes in the future, to pave a new path for micro-robots to imitate various soft morphing of the biological world, and to provide enabling support for adaptive precision biological micro-operations in a complex enclosed living environment. In the future, it will realize the diversification of micro-robot forms and functions in precision medicine and tissue repair such as cardio-cerebral vascular thrombolysis, ulcerative colitis, tumor and other focal drug long-term release.

Introduction to the team:

Based on the School of Mechatronics and Beijing Advanced Innovation Center for Intelligent Robots and Systems, BIT's biological micro-nano operation team has carried out a series of researches on micro-nano robots and micro-nano bio-manufacturing. The relevant results have been published in Nature Communications, ACS Applied Materials & Interfaces, Lab on a Chip, Biofabrication, IEEE Trans Transactions and other internationally renowned journals. This paper takes graduate students as the only first author, and is jointly cultivated by the team and internationally renowned universities such as Nagoya, showing that the team has made phased progress in actively exploring the international talent training model around the frontier of science and technology. At the same time, it shows that the team's research in the field of micro-nano robotics has steadily increased its international influence.