Recently, team members of Professor Yao Yugui, Professor Zhou Jiadong of the School of Physics of Beijing Institute of Technology and Professor Liu Zheng of Nanyang Technological University, cooperated with, Professor Lin Junhao of Southern University of Science and Technology and Professor Li Xingji of Harbin Institute of Technology to make important progress in new 2D magnetic materials. The results were published on April 25 in Nature Electronics, a top international academic journal, under the title of "Phase engineering of Cr5Te8 with colossal anomalous Hall effect". 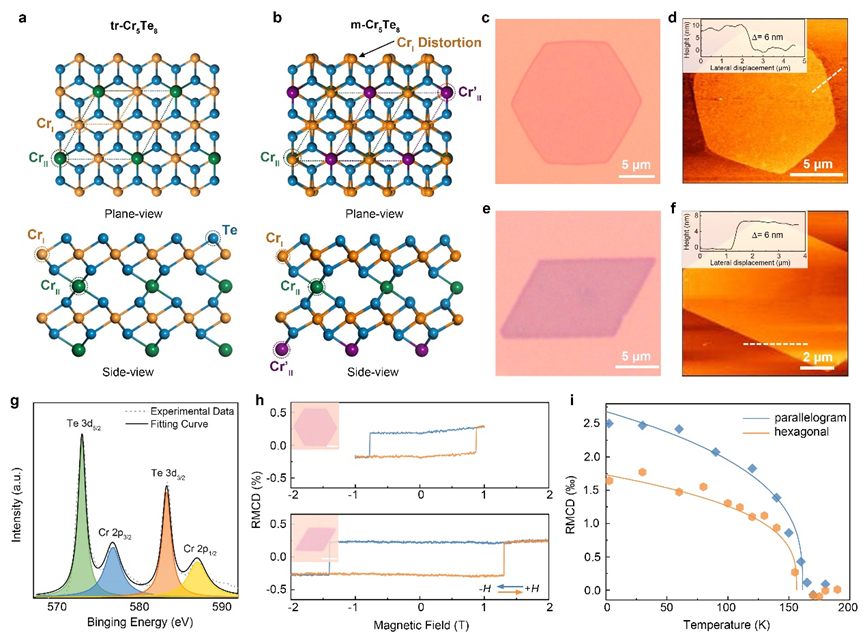 The tunable structure of Cr5Te8 phases stems from the difference in the formation energy of its trigonal phase and the monoclinic phase. The trigonal Cr5Te8 belongs to the P-3m1 space group, while the monoclinic Cr5Te8 belongs to the C2/m space group (Figure 1a-b). Therefore, the growth temperature in the CVD process is critical to achieving a phase transition. At higher temperatures, the trigonal Cr5Te8 will become the dominant phase, while lower temperatures will be more conducive to the formation of a monoclinic phase. In addition, considering that the concentration of Te in the trigonal phase is slightly higher than that in the monoclinic phase (61.5-62.0 at. Te vs 59.6-61.5 at. % Te), the higher temperature is also conducive to the evaporation of the Te precursor, ensuring that a sufficient amount of Te reacts and enters the Cr-Te matrix to obtain the trigonal Phase Cr5Te8 nanosheet. It can be seen from the optical and atomic force microscopy images that Cr5Te8 nanosheets with different phase structures also exhibit different morphological characteristics due to different lattice symmetries, with the trigonal phases being mostly hexagonal and the monoclinic phase mostly being parallelograms (Figure 1c-f). The characterization results of XPS and RMCD preliminarily confirmed the composition and magnetism of nanosheets. Both the trigonal and the single-oblique Cr5Te8 nanosheet exhibit rectangular hysteresis loops at low temperatures, clearly indicating their ferromagnetic properties with vertical magnetic anisotropy. In addition, at the same thickness, the monoclinic phase exhibits greater coercive forces and Curie temperatures, indicating a strong phase-dependent magnetic sequence in Cr5Te8 crystals (Figure 1h-i).

The crystal structure of the trigonal Cr5Te8 and monoclinic Cr5Te8 is equivalent to the introduction of 1/4 of the Cr atom between the layers with CrTe2 as the backbone. The difference is that the distribution of Cr in the adjacent two intercalations in the trigonal phase is exactly the same, while the Cr in the adjacent two intercalations in the monoclinic phase is alternately arranged, which produces structural distortion while staggering, inducing the trigonal phase to change into a monoclinic phase (Figure 1a-b). Figures 2b and f show that the components of the different phase structures are evenly distributed, and the composition of the two is not much different. In order to distinguish between the two phase structures, the research team conducted an in-depth study using selective electron diffraction and high-resolution HAADF-STEM imaging. Due to the difference in the distribution of interpolated Cr in the two phase structures, different hyperlatifiers are generated in electron diffraction, and the trigonal phase Cr5Te8 with triple symmetry and the double-symmetric monoclinic phase Cr5Te8 can be clearly distinguished according to the diffraction image (Figures 2a and e). Further, high-resolution HAADF-STEM imaging clearly shows the difference in lining between the two phase structures at the atomic scale. The atomic lining distributions in different directions (Figures 2d and h) are fully consistent with the position of the interpolated Cr atoms in the structural model and the corresponding QSTEM simulation results, thus confirming that the CVD method can achieve the regulation of the Cr5Te8 phase structure. 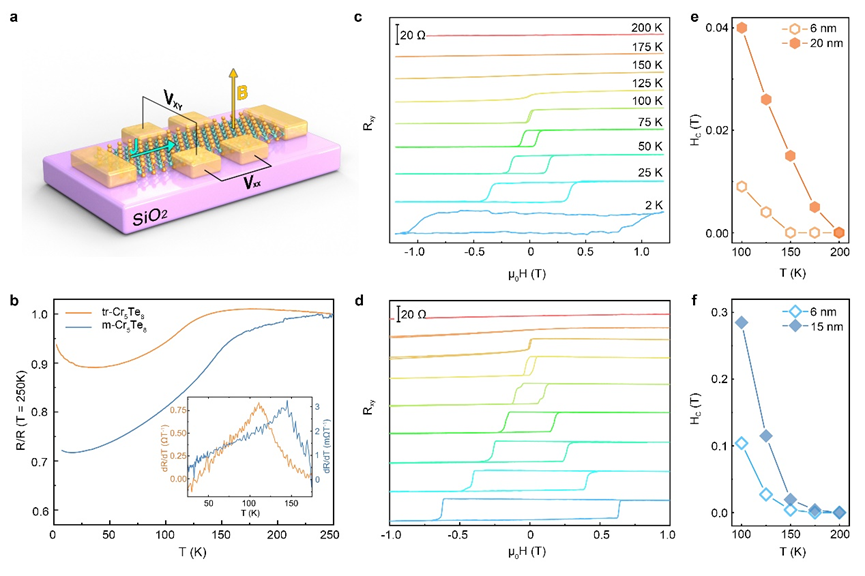 In order to confirm and analyze the ferromagnetism of the 2D Cr5Te8, the research team selected materials of different crystal phases and different thicknesses to prepare the Hall device. The trilateral phase and monoclinic phase Cr5Te8 longitudinal resistance with a thickness of 6 nm exhibit a significant phase transition process during cooling, and the peak position of the first derivative of the resistance-temperature curve indicates that the Curie temperatures of the trigonal phase and the monoclinic phase Cr5Te8 sample are 125 K and 150 K, respectively (Figure 3b). Below the Curie temperature, the Hall resistance of the trigonal phase and the monoclinic phase Cr5Te8 under the action of the external magnetic field, and the obvious stagnation phenomenon is presented, which once again proves the spontaneous magnetization and ferromagnetic long-range order outside the 2D Cr5Te8 surface (Figures 3c and d). By analyzing the variation relationship of the orthodontic field with temperature, the Curie transition temperature of different crystal phases and different thicknesses of Cr5Te8 was reconfirmed (Figures 3e and f). 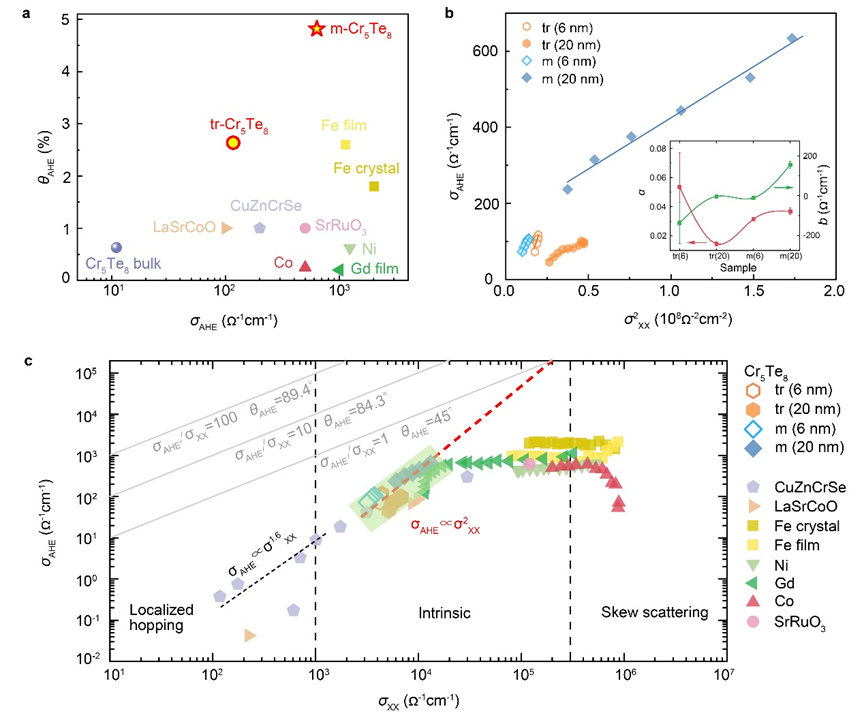 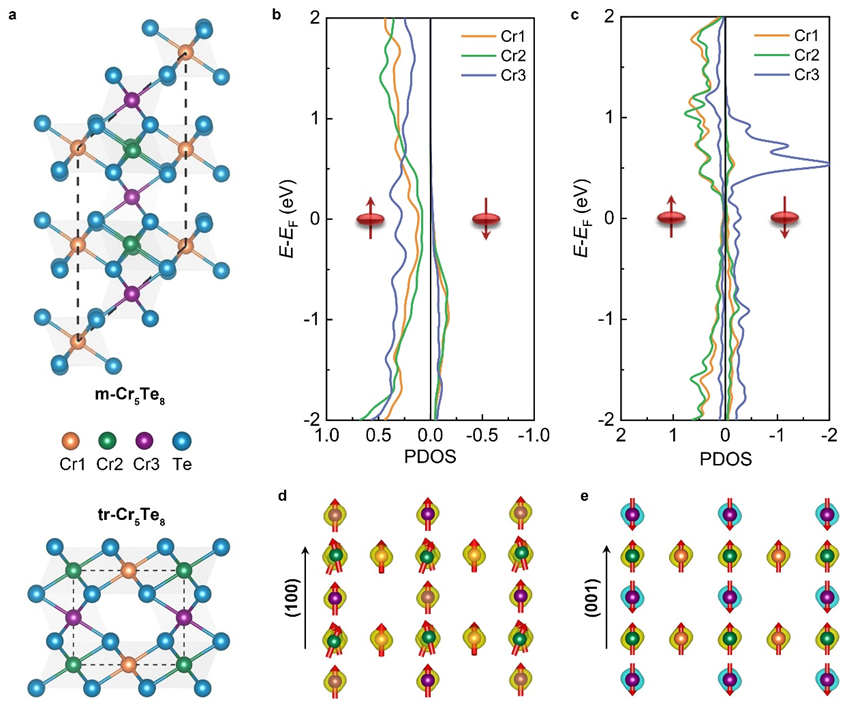 Figure 5. Differences in the electronic structure and magnetic sequence of ternary and monoclinic Cr5Te8

Finally, the research team studied the ground-state electronic structure and magnetic sequence of the Cr5Te8 material system based on the first principles method. The trigonal and single-oblique Cr5Te8 are both Stoner ferromagnetic metal systems, with Stoner parameters of 1.01 and 1.14, respectively, and the monoclinic phase has stronger Stoner ferromagnetic coupling characteristics. By analyzing magnetic anisotropy, it can be seen that both structures are susceptible to magnetization in the out-of-plane direction. Relying on structural aberrations of the CrTe octahedron, the monoclinic Cr5Te8 exhibits distinct non-collinear magnetic features (Figure 5d-e). This work obtains Cr5Te8, a 2D magnetic material with a large anomalous Hall angle, which is expected to promote the realization of the quantum anomalous Hall effect at the 2D limit, which is particularly important for the new generation of Hall devices, especially quantum anomalous Hall devices.

The work was supported by the National Natural Science Foundation of China, overseas high-level talents and the Beijing Institute of Technology Innovation Fund and other related projects.