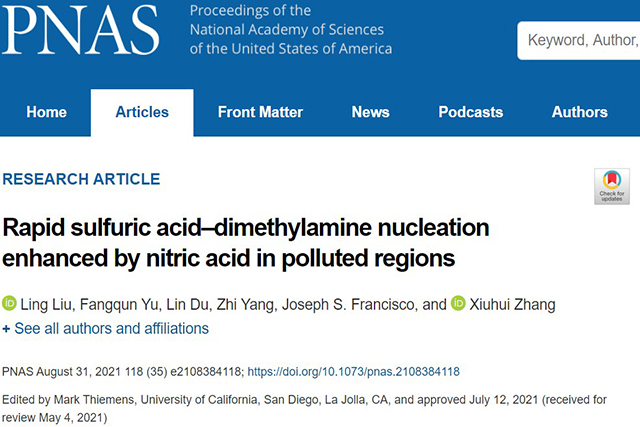 New aerosol particles are an important source of particulate matter and cloud condensation nuclei in the atmosphere, which have a significant impact on regional air quality, global climate and human health, and aerosol nucleation is a key stage in the formation of new particles. Under the combined pollution of the atmosphere, new particle formation events occur frequently, but the known nucleation mechanism cannot explain the rapid rate of new particle formation observed so far, indicating that there are still unrevealed important nucleation components and mechanisms. Nitric acid is one of the most abundant pollutants in the atmosphere, but its role in aerosol nucleation has been neglected. 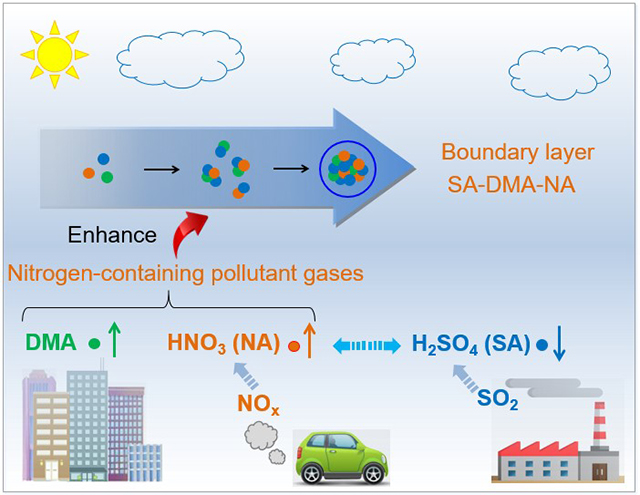 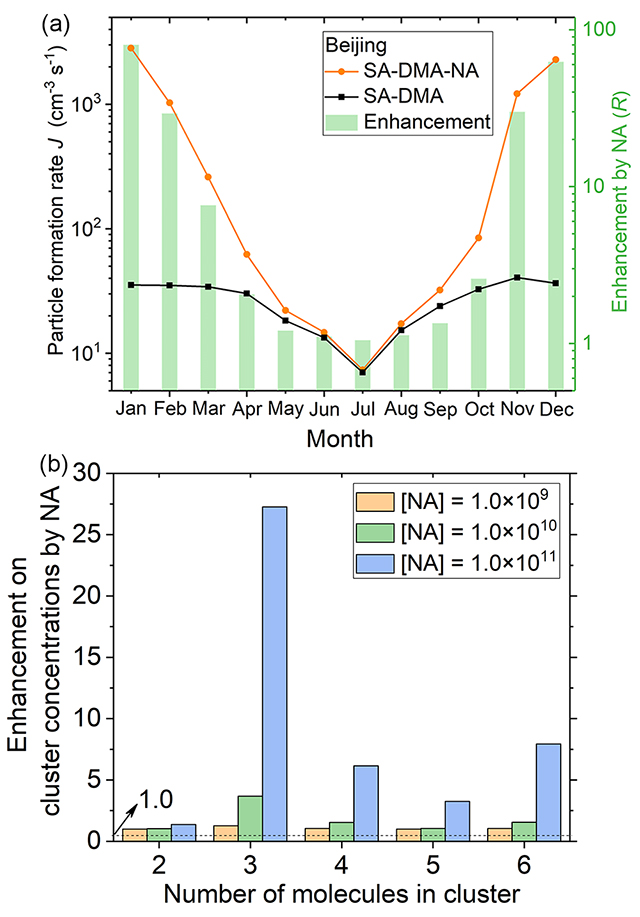 Considering the widespread presence of nitric acid in polluted areas, Professor Zhang Xiuhui and his collaborators combined quantum chemistry calculations with atmospheric cluster dynamics models. The promotion of nitric acid on the nucleation of new particles in the pollution boundary layer of human life has been proposed for the first time in the world (Figure 1). It is found that nitric acid can significantly promote the formation rate of sulfuric acid-dimethylamine clusters in cold polluted areas (such as in the winter of Beijing), up to 80 times (Figure 2, a), and it can also reduce the rate of formation of sulfuric acid-dimethylamine clusters under higher concentrations of nitric acid and dimethylamine. The number concentration of clusters can be significantly increased, up to 27 times (Figure 2, b). At the same time, nitric acid can widely participate in the formation of sulfuric acid-dimethylamine nucleation clusters, and its contribution to the cluster formation path increases with the increase of nitric acid concentration and the decrease of temperature, up to 76%. In fact, in addition to proposing the promoting effect of nitric acid on the nucleation of the polluted boundary layer, Professor Zhang Xiuhui’s research group also discovered theoretically the promotion of nitric acid on the nucleation of new particles of sulfuric acid-ammonia in the higher troposphere as early as 2018 (Phys. Chem. Chem. Phys., 2018, 20, 17406), which was confirmed by the CLOUD experiment published in Nature in 2020 (Wang et al., Nature, 2020, 581, 184).

The above research puts forward a new mechanism in which nitric acid in the pollution boundary layer participates in and promotes the nucleation of sulfuric acid-dimethylamine, providing new research ideas and theoretical clues for the study of new particle formation mechanisms under the conditions of compound air pollution in China; and the study also pointed out that in the context of continuous control of sulfur-containing pollutants, the control of nitrogen-containing pollutants (such as automobile exhaust and industrial emissions) will help to further reduce particulate pollution, providing a new theoretical basis for formulating relevant air pollution prevention and control policies.

Zhang Xiuhui, professor, member of the research team of Professor Li Zesheng from the School of Chemistry and Chemical Engineering, Beijing Institute of Technology, has long been engaged in theoretical calculation and simulation research. In the past four years, a series of research results have been achieved in the field of atmospheric particulate matter formation. In addition to publishing two articles on Proc Natl Acad. Sci. USA, he also published several articles in J. Am. Chem. Soc., Angew. Chem. Int. Ed., Atmos. Chem. Phys., Geophys. Res. Lett., Sci. Total. Environ., Atmos. Environ., Chemosphere and J. Chem. Phys. and other international top journals have published many papers. For details, please refer to the personal homepage: https://cce.bit.edu.cn/szll/ayjscz/hxxk/llyjshxyjs/index.htm.

The above-mentioned research work was funded by the General Project of the National Natural Science Foundation of China (21976015).