High-temperature superconducting materials have irreplaceable applications in strong magnetic fields, lossless power transmission, precision measurement and many other fields. It has been a research hotspot in the fields of condensed matter physics and materials science for a long time. Bi2Sr2CaCu2O8+δ（Bi-2212） is the most typical high-temperature superconductor material, and its superconducting transition temperature（~90K） is above the liquid nitrogen temperature, which has important research value in basic science and application fields. In recent years, researchers have conducted in-depth exploration of the physical properties of Bi-2212, such as the structure of energy bands and the doping effect. However, over the past three decades, the physical aspects of the material system has been studied very deeply, but there have been few studies on the chemical stability. With the rapid development of the field of two-dimensional materials, the single layer and small layer of Bi-2212 have also received widespread attention, and it has been found that its single layer and thin layer have the phenomenon of easy degradation, but its degradation mechanism is still unclear. The study of the chemical stability of Bi-2212 not only has important scientific value, but also is an important prerequisite for ensuring the future application of the material system.

Recently, Professor Huang Yuan from the Advanced Research Institute of Multidisciplinary Science, BIT, Professor Wang Yeliang from the School of Integrated Circuits and Electronics, Zhou Xingjiang, researcher from the National Laboratory for Superconductivity, Institute of Physics, CAS and Professor Wu Qiong from the College of Materials Science and Engineering， BJUT, revealed the degradation mechanism of high-temperature superconductor Bi-2212 in aqueous environment with systematic comparative experiments, high-precision characterization and theoretical calculations. The results show that Bi-2212 will undergo significant degradation in water, especially monolayers and thin layers, and the superconducting transition temperature of Bi-2212 will gradually decrease to completely disappear during the degradation process. Raman spectroscopy and high-resolution transmission electron microscopy show that the degradation rate of different oxygen-containing surfaces of Bi-2212 is quite different, the Bi-O surface is relatively stable, while the Cu-O surface, Sr-O surface and Ca-O surface are more likely to react with water, thus affecting the superconducting transition. The results of theoretical calculations are highly consistent with the experimental results, which once again confirms the differences in the chemical reactions between different oxygen-containing surfaces and water. At the same time, the researchers also compared the differences in the chemical stability of Bi-2212 at different temperatures and different solution environments, which laid an important scientific foundation for the subsequent study of the superconductivity mechanism of the material system and the application of the device. On August 17, 2022, the research result entitled "Unveiling the degradation mechanism of high-temperature superconductor Bi2Sr2CaCu2O8+δ in water-bearing environments" of the American Chemical Society" was published in (Chinese Academy of Sciences, IF:10.383), where Beijing Institute of Technology is the first completed unit. 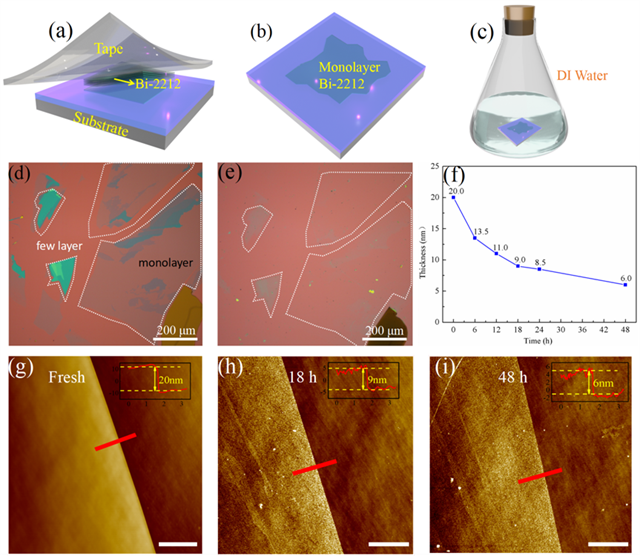 Figure 1. The morphological changes after cleavage on the SiO2/Si substrate to obtain Bi-2212 flakes and immersion in deionized water.

Figure 1 shows the topography changes of Bi-2212 after being soaked in water, compared by optical images and atomic force microscopy (AFM) images. As the soaking time increases, the thickness of the flakes gradually decreases. It can be observed that the surface of Bi-2212 becomes rough after it comes out of the water. The researchers further compared the stability of Bi-2212 in solvents such as ethanol, acetone, HCl and KOH. In organic solvents, the morphology of Bi2212 flakes is relatively stable. However, flakes in HCl and KOH, especially in acidic environments, corrode relatively quickly. 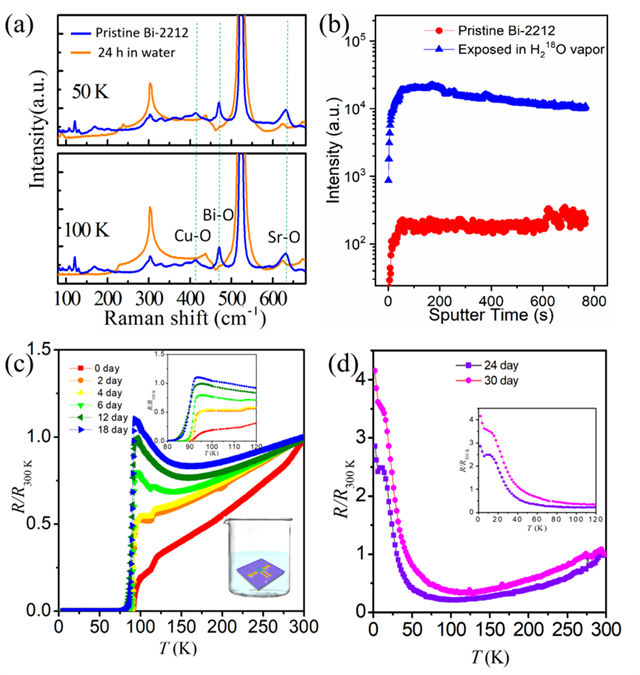 Before The Bi-2212 is immersed in water, three Raman peaks can be observed at 409, 463, and 627 cm-1, namely vibrations of O(Cu) atoms in the Cu-O plane, vibrations of O(Bi) atoms in the Bi-O plane, and vibrations of O(Sr) atoms in the Sr-O plane. After 24 hours of immersion in water, there are two significant changes in the spectrum. Firstly, the phonon peak (409 cm-1) caused by the vibration of the O(Cu) atom almost disappeared. Secondly, phonon peaks caused by O(Cu) and O(Sr) atomic vibrations at 463 and 627 cm-1 show significant softening. These two distinct differences indicate that the copper-oxygen layer is more likely to be destroyed in water. In addition, the softening of the vibrations of the O(Bi) and O(Sr) atoms shows that after the Degradation of the Cu-O layer, the Bi-O bond and the Sr-O bond are also weakened. The conclusions of Raman spectral variation extraction are consistent with TEM and the calculations below, indicating that the Cu-O layer is more sensitive to water. 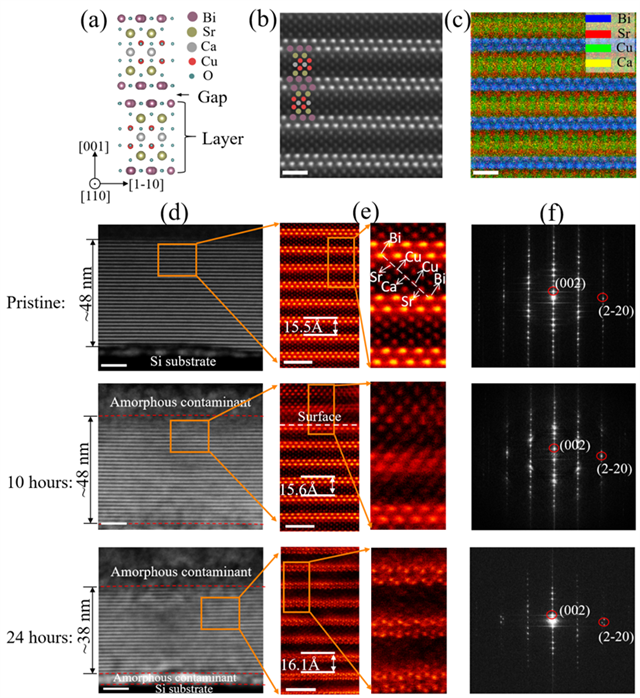 The thickness of the Bi-2212 film after water treatment was found to be reduced by comparing scanning transmission electron microscopy (HAADF-STEM) images. At the same time, after water treatment, the crystal quality decreases and the lattice is distorted. The structure in Figure 3 shows that the interaction of the Sr-O, Cu-O, and Ca-O layers with water is more sensitive than the Bi-O layer. The spacing between layers is 16.1 Å, which increase 3% compared to the original state. The corresponding FFT image shows that the sharp diffraction spots in their original state become scattered or even split after being treated with water. Both the STEM images after water treatment and the corresponding FFT images show poor crystal quality and lattice distortion.

In this work, the researchers conducted theoretical computational studies on the interaction of Bi2212 with water, focusing on the reaction mechanism of Bi-2212 (001) surface and (010) surface with water. H2O undergoes chemosorption and dissociation at the Sr, Cu and Ca sites on the Bi-2212 (010) surface, and its energy release is -3.07, -3.08 and -3.12 eV respectively, which is higher than the H2O dissociation on the Bi-2212 (001) surface. These high exothermic processes show that the Sr-O, Cu-O, and Ca-O layers react more strongly with water than the Bi-O layer. When Bi-2212 comes into direct contact with water, the Sr-O, Cu-O, and Ca-O layers are more likely to be destroyed than the Bi-O layers. The results show that hydrogen ions are the main reason for the performance degradation of Bi-2212. 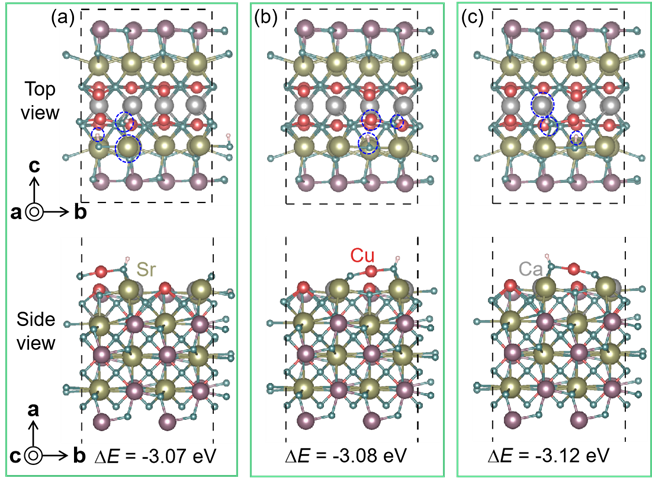 For the first time in this study, the reaction mechanism of Bi-2212 with water has been revealed in detail. Experimental and computational results show that the Bi-O layer is hydrophobic and relatively stable in the aqueous environment. However, other oxide layers exhibit hydrophilic properties and high chemical adsorption energy, tending to react with water. The Cu-O layer and adjacent oxide layers are prone to change in the aqueous environment, resulting in an increase in resistivity and a decrease in the temperature of the superconducting transition before entering the superconducting state. When a certain threshold is reached, lattice destruction of the Cu-O layer will significantly affect the superconducting pairing, eventually leading to the disappearance of superconductivity.

Professor Huang Yuan from the Advanced Research Institute of Multidisciplinary Science, BIT, Professor Wang Yeliang from the School of Integrated Circuits and Electronics, Reseacher Zhou Xingjiang from National Laboratory for Superconductivity, Institute of Physics, CAS, Professor Wu Qiong from the College of Materials Science and Engineering, BJUT are the co-corresponding authors of the article. Zhang Lei, a master's student at the School of Materials Sciences, BJUT, Zhou Xiaocheng, lecturer from the School of Chemistry and Materials Science NNU, and Liao Lei, a doctoral student at the Institute of Physics, CAS, are the co-first authors of the article. The work has been supported by the National Key Research and Development Program, the National Natural Science Foundation of China, the Chongqing Outstanding Youth Fund and the Strategic Key Research Program (B) of the Chinese Academy of Sciences.

Huang Yuan, a professor and doctoral supervisor from Advanced Research Institute of Multidisciplinary Science, BIT. His main research areas focus on the preparation, characterization, device processing, and physical property measurement/regulation of two-dimensional materials. He has published more than 80 SCI papers in Nature Physics, Nature Communications, Physical Review Letters, ACS Nano, etc., including more than 40 articles by the first author (including co-first author) and corresponding authors, and the papers have been cited more than 4400 times in total. He presides over the National Key R&D Program (Youth Project), the National Fund First Outstanding Youth Fund and Surface Project, and the Chongqing Outstanding Youth Fund Project. In 2019, he was selected as a member of the Youth Promotion Association of the Chinese Academy of Sciences, in 2020, he was awarded the honorary title of "China's Top Ten Scientific and Technological Emerging Figures" by the China Association for Science and Technology. In 2021, he won the second prize of the Innovation Award of the Invention and Entrepreneurship Award of the China Invention Association (ranked first). He also serves as the reviewer for well-known journals at home and abroad such as Physiological Review Letters, Nature Communications, Advanced Functional Materials, ACS Nano, Nano Letters, Acta Physica Sinica, etc. and the young editorial board member of the journals Physics, Chinese Physics Letters, InfoMat, and Materials.