Progress of Wireless Charging Micro-Supercapacitors Has Been Made in BIT 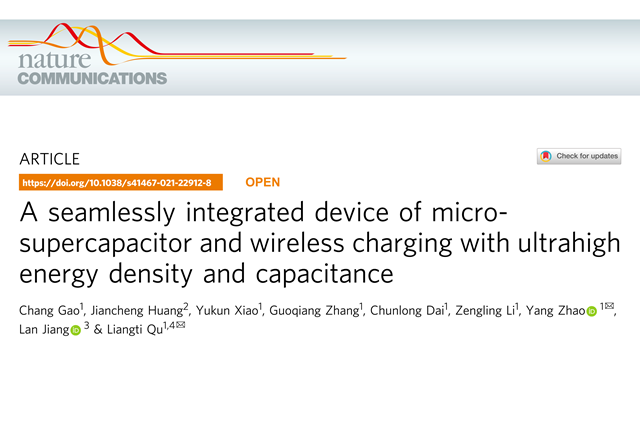 Gao Chang, a doctoral student from the School of Chemistry and Chemical Engineering, Beijing Institute of Technology (BIT), recently published a research paper titled "A seamlessly integrated device of micro-supercapacitor and wireless charging with ultrahigh energy density and capacitance" online in Nature Communications on May 11, 2021 as the first author. Link to the paper: https://www.nature.com/articles/s41467-021-22912-8. Beijing Institute of Technology is the first among the affiliations of the paper. Special researcher Zhao Yang from the School of Chemistry and Chemical Engineering of BIT and Professor Qu Liangti from the Department of Chemistry of Tsinghua University are the corresponding authors. Professor Jiang Lan from the School of Mechanical Engineering of BIT joined the research as a collaborator. This research is supported by the National Key Research and Development Program of China, the National Natural Science Foundation of China, and the Beijing Natural Science Foundation Project.

The research on flexible portable miniaturized energy storage devices is indispensable for the development of wearable electronic devices. At present, there has been no effective method to connect energy storage microdevices and routine power supply equipment during the charging process because routine charging process requires thicker wires to connect to the microdevices, which greatly affects the convenience of these microdevices. If contactless charging is used instead, the cumbersome circuit connecting procedure can be eliminated, thereby enhancing the practicality of energy storage microdevices in micro-drones and micro-detective systems. In addition, the development of microelectronic equipment is still in an exploratory stage. The main challenge is to get rid of the external connections and the physical abrasion of electrodes of microelectronic equipment. Therefore, research on a wireless charging miniaturized energy storage device with high integration as well as high performance is an important direction of microelectronics’ future development. 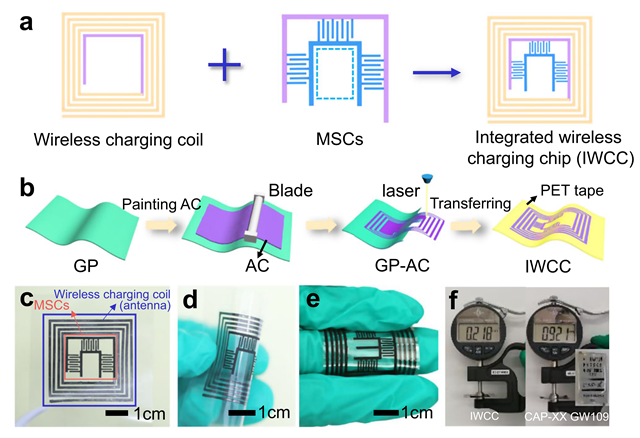 Figure 2: The design, fabrication, and electronic photos of IWC-MSCs.

In order to achieve a contactless charging and rapid high-power energy supply, the researcher has developed a kind of seamlessly integrated wireless charging MSCs(IWC-MSCs) with a planar coaxial structure. The device is made of graphite paper coated with activated carbon by laser etching. It is composed of three interdigital parallel MSCs (the center of the chip, the blue part of Figure 2a) and a wireless charging coil with a certain number of turns (outside the chip, the orange part of Figure 2a). The shared electrode (the purple line in Figure 2a) connects the MSC and WCC. Interestingly, the researchers found that the shared electrode can not only act as a conductive line of the coil to harvest energy from the magnetic field but also uses as an electrode of three interdigital parallel MSCs (the blue line in Figure 2a). This is mainly because graphite paper (GP) has the advantages of low resistance, high conductivity, splendid corrosion resistance, low heat generation and higher working voltage. Even in a sealed environment, the GP coil is more stable as an electrode in the IWC-MSCs while working in the electrolyte compared to the metal-based antenna (such as copper antenna). Therefore, the researchers chose graphite as the material for the preparation of the wireless charging antenna and integrated MSC-electrode device.

This design enables the integrated device with the ability of wireless charging from magnetic field, and efficiently shortens the connection distance of different components and reduces the resistance of the whole device. Moreover, the integrated device with planarity feature presents good flexibility and maintains stable electrochemical properties under bending state at 90°, and it is much thinner than thin-film commercial capacitors. 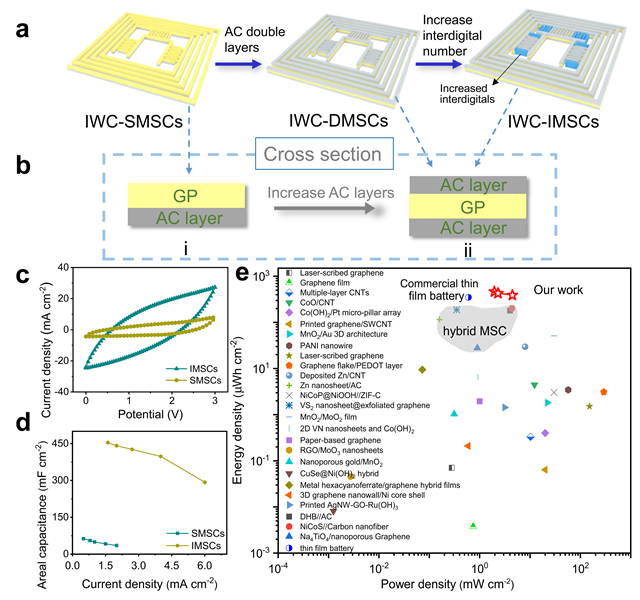 Figure 3: The optimization process of a MSC in the integrated device and the optimized electrochemical properties.

By optimizing the structure of the MSC and wireless charging antenna in the integrated device, researchers have obtained a MSC with a maximum energy density of 463.1 μWh cm-2, larger than all planar MSCs including hybrid MSCs and even commercial thin-film batteries (350 μWh cm-2).

Researchers believe that the main reasons for the high energy density and high capacitance of MSC are as follows: 1. The wide voltage window of the ionic liquid electrolyte greatly increases the energy density of the capacitor; 2. The electrostatic interaction between electrolyte ions and electrodes greatly improves the energy storage effect of the capacitor, and a small part of [EMIM]+ ions are inserted into the graphite layers at ~2.2 V, providing additional pseudo-capacitance and also increasing the capacity of the capacitor; 3. The high specific surface area of activated carbon is the key to high energy density. In addition, the combination of equal amount of activated carbon and graphite on the two electrodes forms the best ratio for high performance of hybrid devices. 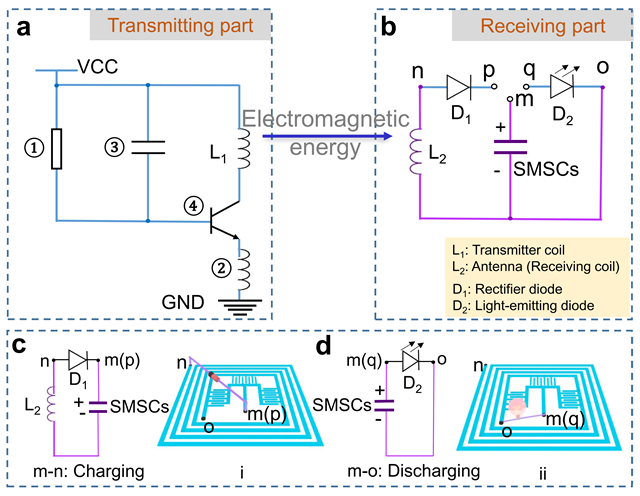 Afterwards, the researchers use the integrated device as a wireless receiver in a wireless charging system to test its charging and energy storage performance. 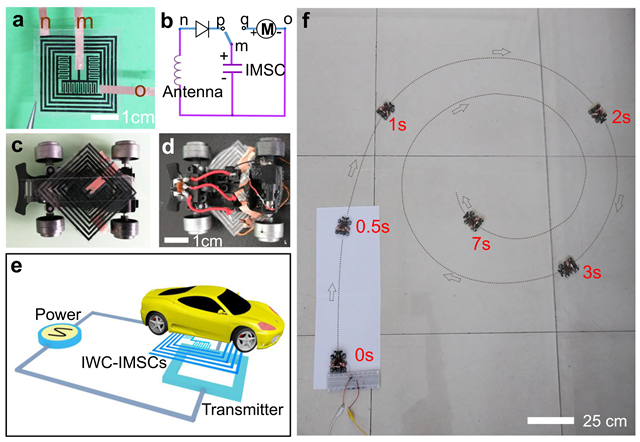 Figure 5: Assembling IMC-IMSCs with an electrical toy car as a power source.

Finally, the integrated device is attached to an electrical toy car and placed near a wireless transmitter, and wireless charging is performed through its own wireless antenna. After wireless charging for 6 min, the whole energy and power output of the integrated device achieve 0.18 mWh and 45.9 mW, respectively. Toggling the switch to release the energy stored in the capacitor can immediately drive the electrical toy car to run (Figure 5). This research brings an insight into contactless micro-electronics and flexible micro-robotics, and is expected to promote the development of portable electronic microdevices.

Gao Chang: A 2019 doctoral student in the School of Chemistry and Chemical Engineering, with Professor Qu Liangti as his supervisor and Special Researcher Zhao Yang as the second supervisor. From 2016 to 2019, he studied for a master's degree in the research group of Professor Qu Liangti. From 2019 to now, he has been studying for a doctoral degree in this research group. Since 2016, he published two papers in Journal of Materials Chemistry A as the first author, one paper in ChemSusChem journal (3 people working together, ranked first), one authorized patent, and one patent that has entered substantive examination; Gao has received the postgraduate science and technology innovation fund of BIT (project applicant), and the "Outstanding Graduate Model", "Outstanding Youth League Cadre" of BIT, and "Three Good Students" of the School of Chemistry and Chemical Engineering.

Zhao Yang is a special researcher and doctoral supervisor at the School of Chemistry and Chemical Engineering, BIT. He has published more than 40 SCI papers as the first or corresponding author, including JACS, Angew. Chem. Int. Ed., Adv. Mater., Energy Environ. Sci., ACS Nano, etc., and in total he has published more than 90 SCI papers. He has four ESI highly cited papers, more than 10,000 citations, four authorized patents, one of which has been industrialized. He has presided over a number of National Natural Science Foundation and Beijing Natural Science Foundation projects, and has participated in a number of major national basic research and development (973) projects, key research and development projects, etc. Zhao has also been selected as an outstanding young talent of the 2017 Beijing Natural Science Foundation.