Beijing Institute of Technology, Feb 28th,2021:  Recently, professor Yao Yugui’s research team at the School of Physics, Beijing Institute of Technology(BIT) in collaboration with Ranga P. Dias, the discoverer of room-temperature superconductivity experiments, an associate professor of the University of Rochester, professor Russell J. Hemley, a high-voltage expert and American academician, who is from the University of Illinois at Chicago and other theorists, used first-principles calculations method and systematically studied further on the effect of carbon and silicon doping on the superconductivity of H3S, based on the work of doping H3S in 2015, and they had an initial understanding of the reason for the room-temperature superconductivity of this material, recognizing that the room-temperature superconducting material synthesized by recent experiments may be the hole-doped material. This work was published in Materials Today Physics 15, 100330 (2020).

Since the discovery of zero electrical resistance of mercury in 1911, room -temperature superconductivity has been the holy grail pursued in the fields of condensed matter physics and materials science. In the BCS superconductivity theory, lattice vibration will cause effective attraction between electrons, and finally make the electrons at the Fermi surface form a Cooper pair through electron-phonon coupling, resulting in superconductivity with zero electrical resistance and expulsion of magnetic flux fields while conductivity can generally only occur at low temperatures. The physicist Neil Ashcroft once predicted that at megabar pressures hydrogen atoms with light mass and small radius in metal hydrogen can enhance electron-phonon coupling and achieve room-temperature superconductivity, but this has not been achieved experimentally. Subsequently, it was proposed that hydrogen-rich compounds may be easier to achieve superconductivity at megabar pressures. Along this line of thinking, with the simulations of first-principles calculations and the extensive application of diamond anvil experimental technology, there has been an breakthrough in the research related to hydrogen-rich compounds, and a large number of megabar pressure superconducting materials have been discovered, such as CaH6, GeH4, MgH6, YH6, SiH4, SiH4(H2)2, etc. In this series of fierce competitions, domestic researchers have made many important research results. In 2014, Ma Yanming's research team and Cui Tian's research team at Jilin University theoretically predicted the superconductivity of high-pressure hydrogen sulfide compounds. The following year, the German experimental group discovered superconductivity higher than 200 K in the system for the first time. In 2015, Yao Yugui’s research team of BIT first theoretically pointed out that at 250 GPa doped H3S can fully reach 280 K which is the goal of room temperature superconductivity [Phys. Rev. B 93, 224513 (2016)]. In the same year, when "Nature" wrote news about the first important achievement in the field of superconductivity, it focused on the theoretical prediction work [Nature 524, 277 (2015)]. Then, in 2019, theoretical predictions and experiments were combined to discover the cage-shaped hydride-rich LaH10, which once again pushed the phase transition temperature to 260 K once again, and among them, Zhao Zhongxian’s research team at the School of Physics has also made significant research results in the high-pressure LaH10 experiment. In October 2020, the Ranga P. Dias research group of the University of Rochester found that the phase transition temperature of H-S-C compounds at 267 GPa reached 288 K, which opened the era of room temperature superconductivity [Nature 586, 373 (2020)]. However, the uncertain crystal structure and appropriate theoretical analysis are still the key issues to be solved urgently. As a matter of fact, back in 2015, professor Yao Yugui’s research team at the School of Physics, BIT, has used first-principles calculations to confirm that after proper hole-doping (e.g. phosphorous replaces a small amount of sulfur atoms, and pointed out that silicon (carbon is also similar) replace is also effective) , hydrogen sulfide H3S with the Im3m structure can effectively  increase the electronic density of states (DOS) at the Fermi level to enhance the electron-phonon coupling, and achieve 280 K high temperature superconductivity [Phys. Rev. B 93, 224513 (2016)]. 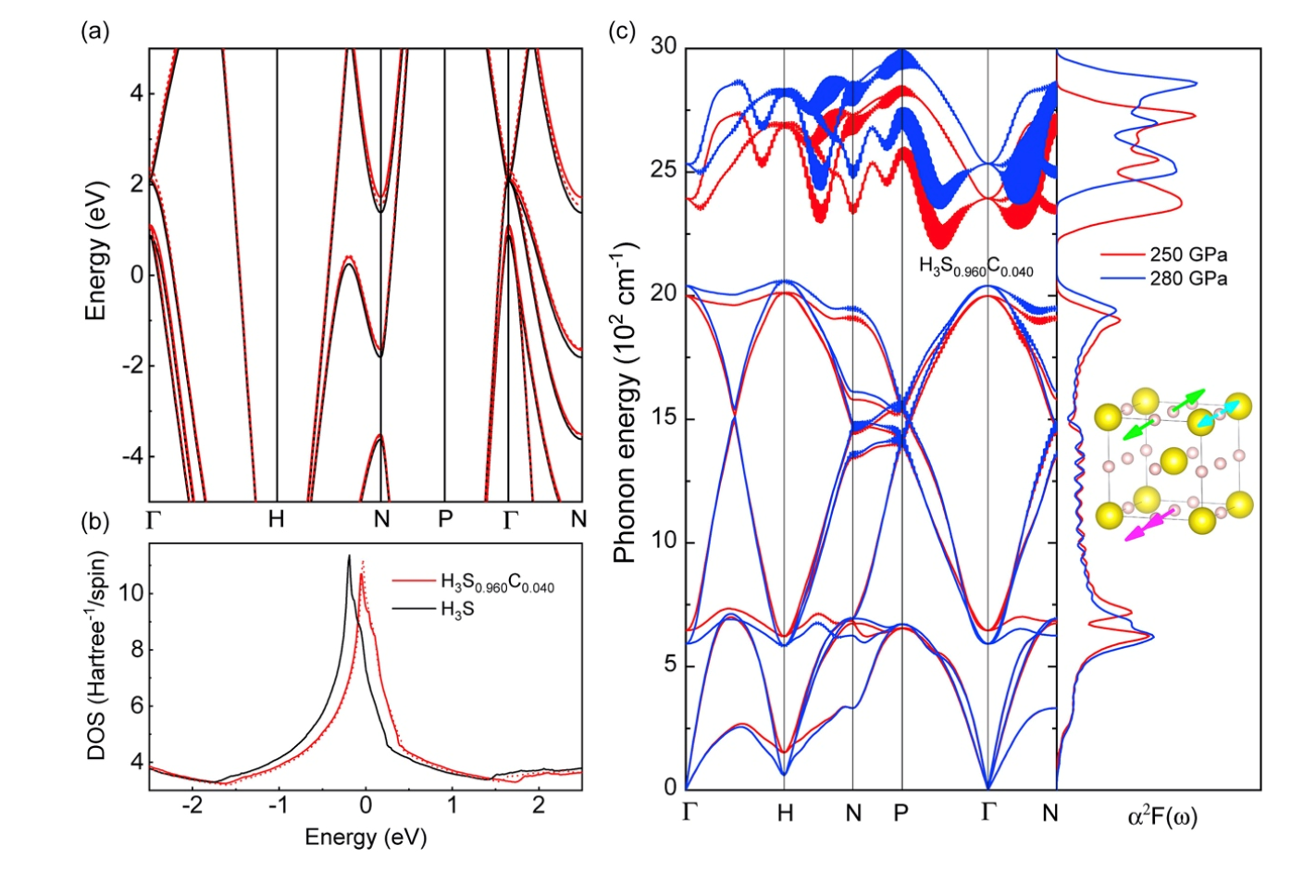 This series of research work found that the Van Hove singularity makes H3S have a high DOS near the Fermi level, which is very conducive to the emergence of BCS superconductivity. The low-concentration hole-doping process makes the Fermi level move closer to the DOS peak, and by increasing the pressure, the DOS peak can be further enhanced. Through detailed electron-phonon coupling analysis, it is found that there is a strong coupling between hydrogen atom vibration and electrons, as shown by the larger line width of the phonon in the stretching mode of the H-S bond in Figure 1(c). 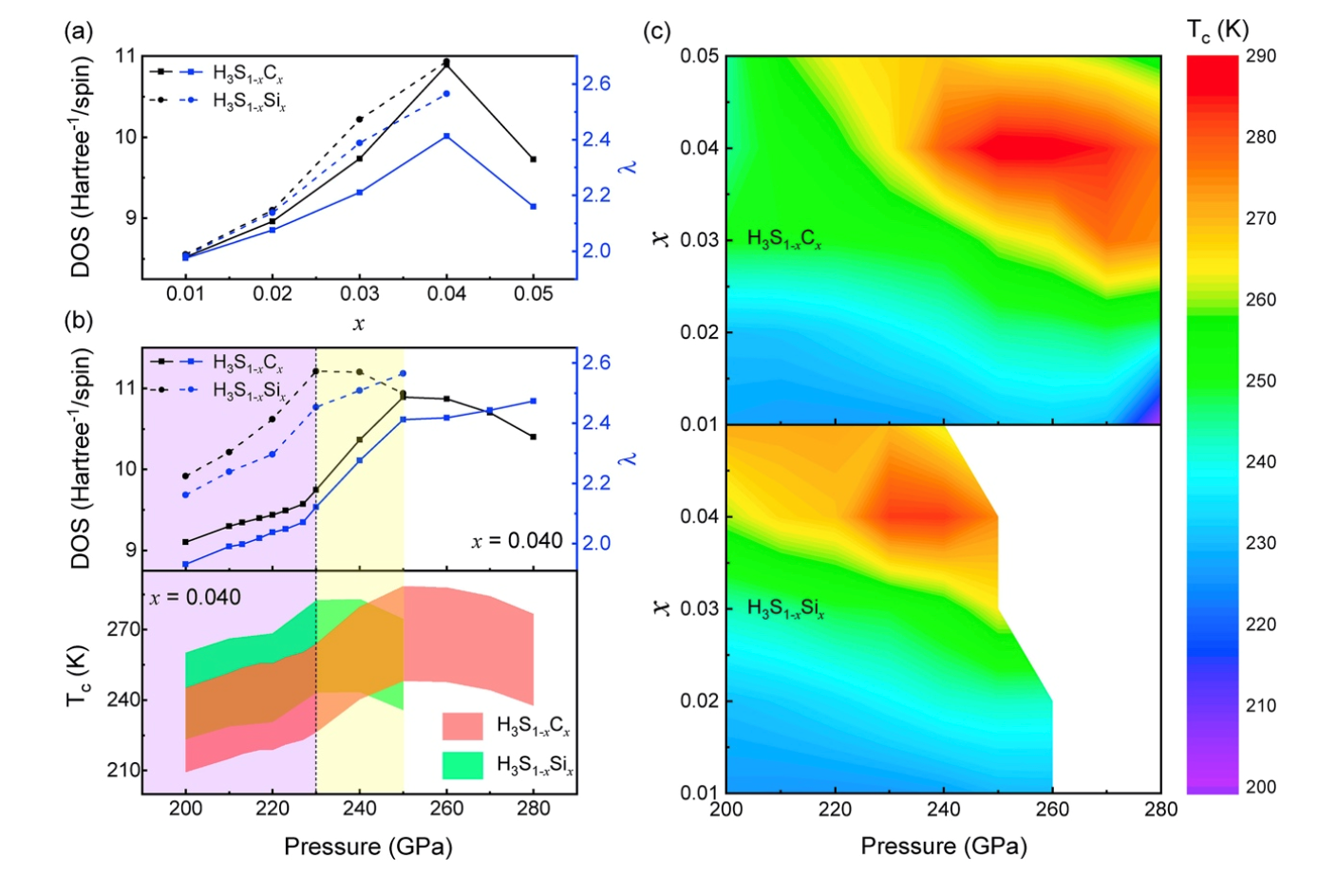 (c) The Tc maps of H3S1-xCx and H3S1-xSix versus x and pressure for m* 1⁄4 0:10. At high pressures or high substitution levels, cubic H3S1-xSix becomes unstable; thus no data are shown.

As the doping concentration of carbon or silicon increases at 250 GPa, an extreme value of DOS appears at the Fermi level when the concentration is 4% [Figure 2(a)]. And the almost constant phonon frequency at low doping concentration causes the electroacoustic coupling constant and DOS to change simultaneously [Figure 2(a)]. Between the pressure of 200 and 280 GPa, the DOS at the Fermi level first increases and then decreases with the pressure. At the same time, the H-S bond stretching mode phonons and the high-frequency phonons of the bending mode harden, while the low-frequency phonons of the H-S bond bending mode are softened [Figure 1(c)]. Combining the effects of hole doping and pressure, the authors found that carbon doping with 3.8% H3S at 260 GPa can achieve room-temperature superconductivity at 289 K [Figure 2(c)]. In addition, the effect of silicon doping on superconductivity is more obvious within 200~240 GPa.