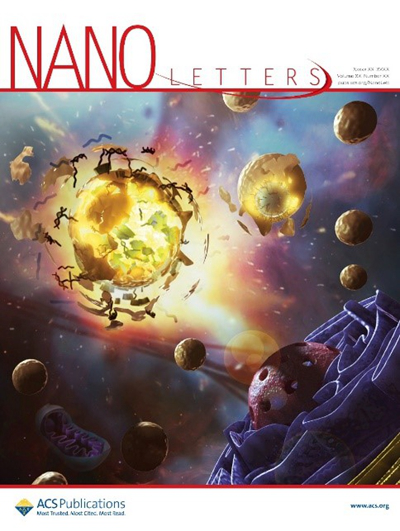 Beijing Institute of Technology, April 6th, 2021: Recently, the research group of Huang Yuanyu, Advanced Research Institute of Multidisciplinary Science of Beijing Institute of Technology(BIT), has made great research progress in pH-sensitive polymeric nanomicelle in efficient endosomal escape of siRNA and tumor therapy. The research achievement titled “Core Role of Hydrophobic Core of Polymeric Nanomicelle in Endosomal Escape of siRNA” was published in Nano Letters (IF:11.238) and selected by Editorial Committee as “Supplementary Journal Cover”. Li Chunhui, the doctoral student of School of Life Science/Advanced Research Institute of Multidisciplinary Science of BIT, is the lead author. Researcher Huang Yuanyu is the only corresponding author.

The siRNA drug has been continuously approved for marketing in recent years. It has become one of the representative technologies leading the third pharmaceutical wave after small molecules and antibodies. The siRNA drug produces a marked effect in the cytoplasm, but it cannot go into cells. Apart from researching how to load siRNA highly efficient enrichment to the target tissue and delivery vectors promoting endocytosis (“get in”), how to significantly increase the efficiency that siRNA endocytosed escapes from endosome to cytoplasm (“get out”) is the key scientific problem and important research direction of developing siRNA drug. Previously studies have shown that the proportion of siRNA which has been endocytosed into cells and can escape from endosome to cytoplasm is only 1%-2%(even lower than 1%) . 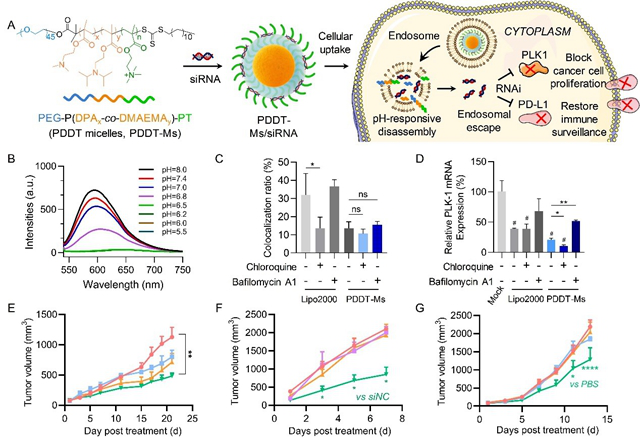 Because of its easy synthesis and modification, simple composition, hydrophilic hydrophobic conversion and other advantages, polymer carrier attracts a lot of attention by researchers. In this study, the research group of Huang Yuanyu designs and synthesizes a new pH responsive triblock polymer mPEG45-P(DPA50- co -DMAEMA56)-PT53(PDDT), which can load siRNA efficiently and achieve rapid escape of endosomes. What’s more, it achieves effective tumor therapy though delivering PLK1 siRNA related to cancer cell proliferation or PD-L1 siRNA related to tumor immune checkpoint (Picture 1A).

Researchers investigate the pH response of PDDT-Ms nanomicelles firstly. The result shows that PDDT-Ms nanomicelles is stable under neutral physiological conditions and disintegrates rapidly in a slightly acidic environment (similar to the pH environment of endosome) (Picture 1B), whose feature is suitable for the intelligent delivery of the siRNA drug in vivo. The study on the mechanism of cell level shows that, after PDDT-Ms/siRNA transfects the cells, the proportion of co-localization of PDDT-Ms/siRNA with endosomes and lysosomes is lower than the commercial transfection reagent Lipofectamine 2000(Lipo2000), which means PDDT-Ms/siRNA has a stronger escape ability (Picture 1C). Researchers make further use of Chloroquine which is the disrupting agent of endosome/lysosome and Bafilomycin A1 which inhibits endosome/lysosome acidification to explore their effects on the transfection of Lipo2000 and PDDT-Ms. The data shows that, Chloroquine improves the endosome escape effect of Lipo2000 while Bafilomycin A1 reduces the endosome escape effect of Lipo2000, which is consistent with expectations. And the influence of these small molecules on PDDT-Ms is consistent with that of Lipo2000, but the influence degree is significantly lower than that of Lipo2000, which indicates PDDT-Ms system has strong enough escape ability (Picture 1C). The gene expression inhibition efficiency of cell level is consistent with the trend of endosome escape (Picture 1D). Furthermore, researchers build CDX model of hepatoma cell lines xenotransplantation (Picture 1E), PDX tumor model of hepatocarcinoma tissue xenotransplantation (Picture 1F) and colon cancer model (Picture 1G) in mice. The data shows that, the system of PDDT-Ms/siRNA drug can effectively inhibit tumor growth, promote cancer cell apoptosis and prolong animal life cycle in these tumor models. At the same time, the paper also researches the internal safety of the polymer nucleic acid system. Pathological section, serum biochemistry and other indexes show that the system has good internal safety.

In summary, polymer nanomicelles PDDT-Ms designed by researchers of this work can rapidly respond to the endosomes acidic pH and promote the escape and release of siRNA efficient endosomes to achieve efficient genes silencing in vivo and in vitro. This work emphasizes that the endosomes escape plays an important and decisive role in siRNA therapy in vivo and in vitro, provides guidance for reasonable design of siRNA delivery vector and builds a good platform for siRNA mediated tumor therapy. After being received, this work is further selected by Editorial Committee as “Supplementary Journal Cover” (Picture 2).

Huang Yuanyu, a researcher and research group’s leader and doctoral supervisor of BIT. The research interest mainly focuses on nucleic acid technology and drugs/vaccines, including the design and screening of nucleic acid molecules (such as siRNA, mRNA, etc.), drugs delivery and innovative diagnosis and treatment technology’s research of major diseases. He publishes 40 papers as the corresponding/lead author in Nano Today, Adv Funct Mater, Nano Lett, Biomaterials, etc. involving 14 papers whose IF>10. He publishes more than 60 papers, writes 8 monographs and applies for 7 patents and PCT patents granted in many countries. He has successively presided over more than 10 projects such as National Natural Science Foundation of China, was selected as Beijing Science and Technology Nova (2020), won the "future star" Award (2019) of Chinese American Society of Nanomedicine and Nano biotechnology and other honors. He is the Secretary General and Director of Nanobiology branch of Biophysical Society of China, and director or member of the other four societies. He is the deputy editor of Exploration and editorial board member of Chinese Chemical Letters and other journals.