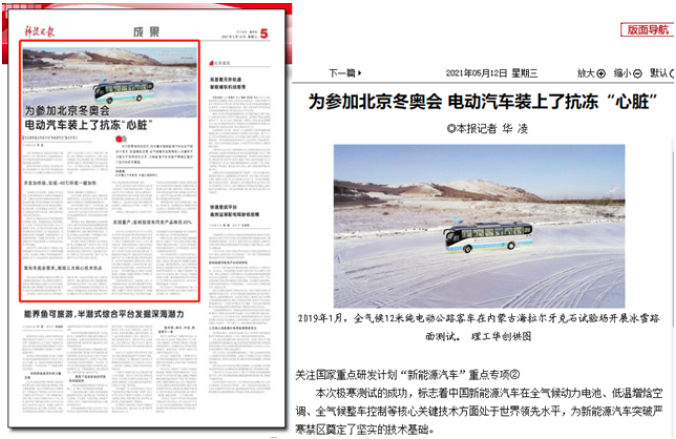 In order to meet the application requirements of the Winter Olympics environment, under the support of the national “New Energy Vehicles” Key R&D Program of “Key Technology and Vehicle Application of Power Platform for High Performance Pure Electric Bus”, under the guidance of Prof. Sun Fengchun, BIT, who is also the academician of Chinese Academy of Engineering, the all-climate power battery, a lithium-ion power battery system product independently developed by the project team led by Prof. Lin Cheng (also a doctoral supervisor), National Engineering Laboratory for Electric Vehicles, BIT, can provide strong kinetic energy in extremely cold environments, and install a freeze-resistant “heart” for new energy vehicles.

Developing the heating electrode to realize one-key heating at -40℃

“The chemical reaction of the battery needs a certain temperature, so the electric vehicle can not work at -10℃ without taking corresponding measures. In order to solve the problems of charging difficulty and start-up failure of electric vehicles in extremely cold environment, the lithium-ion power battery system we developed adopts the method of built-in heating diaphragm to make the battery have a third electrode, namely the heating electrode, which can be heated at the ambient temperature of -40°C with one-key to achieve rapid self-heating and cold-start.” Lin Cheng said in an interview with Science and Technology Daily.

According to reports, in order to solve the series of problems faced by electric vehicles in severe cold environments, BIT, RiseSun MGL, BIT Huachuang Electric Vehicle Technology Co., Ltd. (hereinafter referred to as “BIT Huachuang”), and BAIC Foton Motor Inc., have jointly developed this all-climate battery system. The principle is that the battery can use the little energy left to heat itself in extremely low temperature environment. Its working process is equivalent to internal fast short circuit, which makes the battery heat up quickly and activate itself.

In the severe winter of 2018, Hailar, Inner Mongolia, it was freezing cold, and the electric car developed by Lin Cheng’s team was driving on snowy roads. After testing, the vehicle was allowed to stand at -40℃ for 48 hours, and then the battery was heated. The temperature of the battery system rose by 4℃ every minute, and the energy consumption accounted for 5% of the total energy.

In the same period of 2019, the team continued to organize vehicle winter trials in Hailar. The battery system increased by 7℃ every minute, the energy consumption accounted for 5% of the total energy, and the heating energy consumption of air conditioning decreased by 40%.

In early 2020, the team conducted another winter trial. Up to now, the lithium-ion power battery system products developed by the project team led by BIT have successfully completed three extreme cold environment tests of all-climate power batteries in Hailar, and the self-heating rate indicator has reached the international leading level.

Lin pointed out: “This is a complete innovation system involving many core technologies. The team not only conducts research on the control strategy and theory of the heating system, such as the selection and optimization of heating elements, the research and development of heating loops, and the research on heating strategies, but also combines with vehicle control. At present, the entire working principle verification of the all-climate power battery system has been completed, and the battery system product prototype has been successfully developed.”

With the system energy exceeding 155 watt-hours/kg, the all-climate lithium-ion power battery system product can quickly heat the - 30 ℃ power battery to the normal use state in about 5 minutes through the one-key heating technology, and the heating energy consumption is no more than 5%, so that the vehicle can start and drive normally. The whole vehicle product has been announced and put into test demonstration application.

Obviously, in order to meet the application needs of the Winter Olympic Games, electric vehicles should not only be able to start, continue and use effectively in low temperature environment, but also fully consider the mountainous terrain of Hebei competition area of the Winter Olympic Games, so as to solve the problem of safe driving on mountain, ice and snow roads. In addition, electric vehicles also need to have a high level of intelligent driving.

In order to satisfy the application requirements of new energy vehicles for the Winter Olympics, through the research and development of the integration of production, learning and research, BIT Huachuang applied the key technologies of high-performance all-climate electric vehicles to the development of pure electric buses in the Winter Olympics environment. At present, this achievement has the conditions for mass production.

According to reports, in terms of the power of electric vehicles for the Winter Olympic Games, BIT Huachuang invented a “new dual-motor drive system” and developed a high-efficiency integrated power drive technology for electric vehicles without power interruption. This technology is closely related to the practical application needs of commercial vehicles. The research and development results are simple and compact in structure, strong in torque output capacity, high in specific power density and great in energy saving potential. This is the first in China, and this technology can not only realize automatic shift, but also ensure the power supply is not interrupted, which greatly improves the performance of electric vehicles.

In addition, the electric vehicle of the Winter Olympic Games is also equipped with the intelligent networked vehicle controller developed by BIT Huachuang, which can seamlessly connect with the Internet and the component network in the vehicle. It has the functions of vehicle control, remote diagnosis, Bluetooth diagnosis, remote FOTA and wireless calibration. It also has the multiple encryption and mobile phone holding system to ensure the security of communication and documents. Electric vehicles can upload vehicle status and fault through 4G network to realize remote diagnosis and update program.

“According to the vision of the team, the information of every battery and circuit inside the future car can reach the monitoring center, the management team and the vehicle enterprise in real time, so as to realize scientific monitoring and management and predict the fault in advance.” Lin Cheng said.

At the beginning of 2020, the Winter Olympics new energy vehicle technology extreme cold environment test was carried out at Hulunbuir Winter Automobile Test Site of Yakeshi Automobile Center in Inner Mongolia. Lin’s team put the whole vehicle in the extremely cold environment below -30℃, and after 40 hours, the whole vehicle was frozen through. Field test data showed that Foton 12m electric bus, Yutong 7m medium bus and BAIC new energy electric minibus could realize 6-minute fast self-heating start-up, the heating rate is more than 5℃/minute, and the energy consumption of battery heating in low temperature start link is not more than 5%, so there was no need to heat the battery during vehicle driving. The heating test of low-temperature enthalpy increasing air conditioner on Foton bus has realized that the temperature of the whole car can be raised from -30℃ to 19℃ within 30 minutes, while the current conventional heat pump air conditioner for vehicles will not be able to start at -15℃. The three types of vehicles have successfully passed a series of tests, such as all-climate low-temperature power battery heating, air conditioning heating, defrosting, climbing, acceleration, braking and energy consumption under ice and snow conditions.

Lin Cheng told reporters that at present, small batch production of all-climate new energy buses has been carried out and trial run has been carried out in Yanqing District and other areas. If all-climate battery technology can be widely used, China’s electric vehicles are expected to be popularized to the northwest, northeast and other Alpine regions, and even exported to Russia and Northern European countries.

According to the official website of Beijing Municipal Science and Technology Commission, after years of technical research, the project team has integrated a number of innovative products, such as all-climate battery system, intelligent vehicle controller, one-key heating control system of power battery, two gear electric drive assembly without power interruption, low temperature enthalpy increasing air conditioner, aviation aerosol body insulation material, etc., based on the verification of all-climate battery technology principle. What is more, the team also has solved the technical problems of pure electric vehicle not being charged or discharged, vehicle not being started, and high energy consumption of air conditioning under extremely cold conditions. The energy consumption of the whole vehicle is 20% lower than that of the existing similar vehicles under the operating conditions, and the battery system can operate normally under the ultra-wide ambient temperature of -40℃ to 60℃.

It is estimated that by 2022, electric vehicles with high performance and all-climate working mode will be displayed in front of the world, which is expected to become a beautiful scenery at the Beijing Winter Olympic Games.