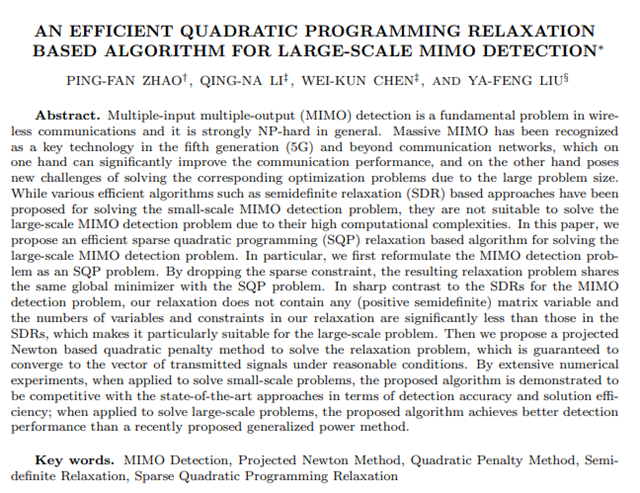 Recently, Associate Professor Li Qingna from the School of Mathematics and Statistics of Beijing Institute of Technology and her graduate student Zhao Pingfan and collaborators have achieved important results in the research of large-scale MIMO detection problems An efficient quadratic programming relaxation-based algorithm for large-scale MIMO detection. It was published in SIAM Journal on Optimization, an authoritative academic journal in the field of international optimization. The result puts forward a new vector model based on assigned variables, and describes the theoretical boundary of the accurate recovery of the relaxation problem of this model; based on the simple vector relaxation model, a second penalty method (PN-QP) based on identifying sparse support sets is proposed, which can quickly and effectively deal with massive MIMO problems, and achieve the effect of low recognition error rate and high speed.

Since MIMO Detection was put forward in the 1960s, it has always been a research hotspot in the communication field, and it is also a basic problem in the communication field. Academicians of the Academy of Sciences and Academy of Engineering in many countries have invested a lot of energy on this issue. The MIMO detection problem is to recover the real transmission signal based on the received signal under the premise of the known MIMO channel matrix. In addition, the transmitted signals belong to a specific discrete symbol set, which is determined by the modulation method used. In actual communication systems, common modulation methods include phase shift keying (PSK) and quadrature amplitude modulation (QAM). This problem is an optimization problem on a set of discrete constraints, which is NP-hard. Semi-definite relaxation proposed by scholars represented by Professor Tom Luo, academician of the Royal Academy of Sciences of Canada, is an important method for solving MIMO problems. With the development of massive MIMO technology and its key applications in 5G communications, this issue has received increasing attention from researchers. However, the increase in the number of antennas increases the scale of the MIMO detection problem, which brings new challenges to signal processing and optimization. Traditional semi-definite relaxation methods deal with massive MIMO problems due to their large scale and large number of constraints, resulting in slow solution speed and high signal recovery error rate, which cannot meet the needs of actual communication.

Associate Professor Li Qingna and her collaborators have proposed a quadratic programming model based on assigned variables for PSK modulation of massive MIMO detection. This model cleverly uses the special structure of the PSK modulation symbol set. Its advantage lies in the simplicity of the model. The number of variables and the number of constraints are maintained at the same scale as the original problem, so it will not increase the burden of the model on the algorithm. Furthermore, a simple and tight slack problem is also obtained. In the algorithm design, based on the idea of identifying sparse support sets, a second penalty method based on projection Newton (PN-QP) is proposed. Under certain conditions, it can be proved that the PN-QP algorithm will converge to the unique global minimum value of the original problem, thereby completely recovering the true transmission signal. Compared with existing algorithms, the PN-QP algorithm achieves a better balance between detection performance and computational complexity, especially when the number of antennas is the same as the number of users, PN-QP has obvious advantages.

This research was completed by Li Qingna, associate researcher Liu Yafeng and team member of the Academy of Mathematics and Systems Science of China Academy of Sciences, as well as team members associate researcher Chen Weikun, and student Zhao Pingfan. Associate Professor Li Qingna is the corresponding author. This work was funded by the National Natural Science Foundation of China.

Li Qingna, associate professor, the main leader of the optimization team of the School of Mathematics and Statistics, BIT. She has been engaged in the research of optimization theory and algorithm and application for a long time, published the monograph Multidimensional Scaling Method, and published more than 20 papers in international authoritative journals such as SIAM Journal on Optimization as the first author.