Telling the "Long March Road" in his heart, the BIT "male god" classroom is high-energy and super-burning! 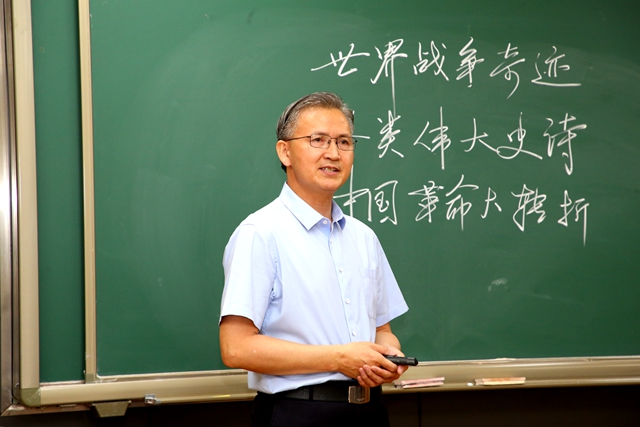 "We can't make history rigid, and we should make students love history."

"We can’t make theories empty, because a good theory is an ideological weapon.

In the course of The Outline of Modern Chinese History at Beijing Institute of Technology, Associate Professor Yang Cailin of the School of Marxism made frequent comments.

Today, we will introduce you Yang Cailin, and experience the "live" and "fire" ideological and political classroom.

How to give "Key Courses" for Morality Education in Universities? Yang Cailin has his own teaching philosophy.That is, "three do not copy, three combinations, three lectures, four 'ma' and five degrees"

Students who have had his class believe that he is good at analyzing the ins and outs of events in the grand narrative, focusing on digging out the virtues of characters in the long river of history, so that students can deeply feel the charm of historical figures and ideological weapons, and they often respond with warm applause.

He implemented the "5+1" teaching model, asking students to visit a museum, watch a documentary, read a classic, write a book report, and give a lecture in class, based on which we should improve students’ learning ability, transformation ability, integration power, innovation power, display power.

He took the initiative to approach the students and adopt a better way to talk about politics through academics. He tells the truth with cases and tell the values with stories. The topic of "Two Bombs and One Star" meritorious scientists taught by him has received enthusiastic response from students.

Yang Cailin grinds his sword for ten years and published a 20,000-character essay on "The Early International Communication of the Long March of the Red Army", which was reprinted by the Xinhua Digest, Modern History of China and the new media of the Chinese Academy of History, and edited by the Chinese Social Science Digest. "To do history, you must maintain a sympathetic understanding of history, warmth and respect. To talk to the past, you must endure loneliness and sit on a cold bench."

Since 2020, Yang Cailin has been invited by the column group of "A Daily Conversation" on the China Broadcasting Network.

Some teachers in the Teaching and Research Section of the Outline of Modern Chinese History, he led the team to work together,

And he was also awarded the advanced collective of the school's "Three Educations". In the first Beijing University Teacher Teaching Innovation Competition, Yang Cailin's team won the first prize.

"Traveling in the sea of history for more than ten years, Yang Cailin never forgets his original intention and keeps his mission in mind.

Insisted on teaching the first lesson in colleges and universities, he is realizing his own life value while practicing the spirit of Morality Education.