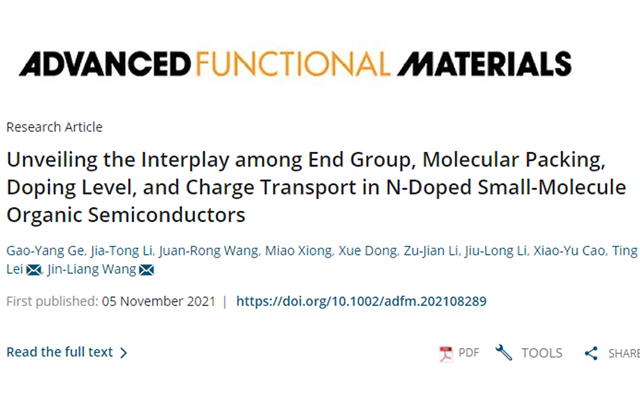 Wang Jinliang, the professor of the School of Chemistry and Chemical Engineering, Beijing Institute of Technology, led the team and synthesized three n-type small-molecule organic semiconductors with different end functional groups, based on the previous work on the end group regulation of A-D-A type small molecule materials ( ACS Energy Lett., 2018, 3, 2967; J. Mater. Chem. A, 2020, 8, 4856; Energy Environ. Sci. , 2021, DOI: 10.1039/D1EE01832A; J. Mater. Chem. C, 2021, 9, 1923-1935, etc.) (Figure 1). Subsequently, together with the group of researcher Lei Ting from the School of Materials Science and Engineering, Peking University, they systematically investigated the effect of end groups on the material properties and the intrinsic factors limiting the conductivity enhancement of these materials through single-crystal diffraction, field-effect transistor performance test, post-doping conductivity test experiment, and two-dimensional thin-film grazing incidence diffraction. In general, to improve the conductivity of materials, it is necessary to improve the doping efficiency of materials with dopants and their own carrier mobility. According to their study, TDPP-ThIC with high electron mobility of 0.77 cm2 V−1 s−1 and high electron affinity, which can be easily n-doped; however, it only displays an electrical conductivity ≈ 10−3 S cm−1, which is significantly lower than that of other types of small molecule materials under the same doping conditions. For this reason, the authors obtained single-crystal data of TDPP-IC and TDPP-ThIC by solution volatilization method and combined with the grazing incidence diffraction information of pure-phase films to simulate the molecular stacking morphology in the thin film state (Figure 2). 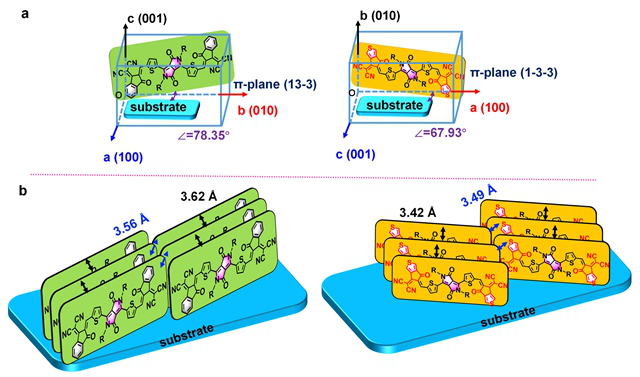 As an increase of the N-DMBI mole ratio, the diffraction peaks become weaker and broader, implying a gradual decrease in the crystallinity of the film states. Meanwhile, it can be seen in the AFM morphology diagram that the addition of the dopant disrupted the fibrillar reticular transport network in the original films, and with the increase of the doping concentration, the films exhibited even a grain-loaded aggregation (Figure 3), further reduced the intermolecular charge transport properties. Combining with the previous single-crystal diffraction data, the authors found that the π–π stacking distances within the molecular columns changed from 3.50 Å to 3.55 Å and the inter-column stacking distances g changed from 3.10 Å to 3.18 Å with increasing doping concentration, and the inter-column stacking distances also changed from 8.23 Å to 8.42 Å compared to the intra-column stacking. By inference, the N-DMBI doping mainly entered the interchain stacking and intercolumn stacking regions of the molecules (Figure 3), a view consistent with the phenomena observed for other polymeric types of materials after doping. In general, the good charge transport channels of the original TDPP-ThIC films were disrupted, which resulted in their low conductivity after doping. These results suggest that when considering improving the conductivity of n-type small molecule-like thermoelectric materials, it is necessary not only to improve the doping efficiency and carrier mobility but also to ensure that the doped films still have a good conductive pathway. The interplay between the type of end groups, molecular stacking pattern, doping ability, and charge transportability in n-doped organic small molecule thermoelectric materials is revealed throughout the paper. These provide a new idea for the synthesis of n-conjugated small molecule thermoelectric material systems with excellent electrical conductivity. The authors concluded that when designing n-type small molecule-based thermoelectric materials with high conductivity, the intermolecular interactions need to be appropriately enhanced to avoid the dopant-induced structural disorder and decrease in film crystallinity, and the compatibility of the host molecule with the dopant needs to be appropriately enhanced. 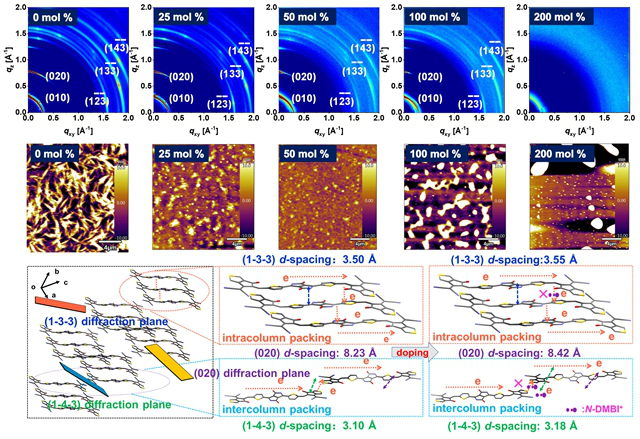 The related results were published in the top international journal Advanced Functional Materials (2021, 31, 2108289) as Unveiling the Interplay among End Group, Molecular Packing, Doping Level, and Charge Transport in N-Doped Small-Molecule Organic Semiconductors. Ge Gaoyang, a Ph.D. student in the School of Chemistry and Chemical Engineering, and Li Jiatong, a Ph.D. student in the School of Materials Science and Engineering at Peking University, are the co-first authors of the paper. Professor Wang Jinliang in the School of Chemistry and Chemical Engineering, BIT and researcher Lei Ting in Peking University is the co-corresponding authors. The co-authors of the paper also include Professor Cao Xiaoyu in Xiamen University. The research work was supported by the National Natural Science Foundation of China, the National Overseas High-Level Young Talents Program, and the Teli Young Scholars Program of BIT, as well as by the Beijing Key Laboratory of Photoelectric Conversion Materials, the Analysis and Testing Center of the university, and the BL14B1 line station of the Shanghai Synchrotron Radiation Light Source Center.