BIT’s progress in the field of human brain aging mechanism

Recently, Professor Yan Tianyi’s team in the School of Life Science has made important research results on the mechanism of brain functional network aging in healthy adults, which was published in Radiology (Impact Factor IF: 11.1), the second-ranked (2/133) Region 1 Top journal in radiology, nuclear medicine and medical imaging.The first author of this paper is PhD student Liu Tiantian, and the corresponding author is Prof. Yan Tianyi. BIT is the only institution to complete the thesis.

In 2021, the results of the seventh national census were announced. With 18.7% of the population aged 60 and above, the aging trend in China is obvious. Aging is often accompanied by the gradual degeneration of various body organs, especially the brain, whose functional degeneration greatly increases the risk of age-related neurodegenerative diseases, such as Alzheimer's disease and Parkinson's disease. A full understanding of the dynamic changes of brain function during aging will help to propose new strategies for personalized regulation of neurodegenerative diseases.

Functional brain magnetic resonance imaging is one of the important tools to measure changes in brain function and can be used for multidimensional brain mechanism studies.Previous studies have used dynamic brain functional connectivity techniques to discover different states of the brain associated with aging, but could not describe the co-activation patterns among brain regions. Prof. Yan Tianyi's team developed an algorithm for the analysis of co-activation patterns among brain regions with a single frame of data as the minimum unit of analysis, which can resolve the dynamic changes in the brain with higher temporal resolution. Therefore, this study obtains clear definitions of different patterns by quantifying brain activation levels to facilitate the interpretation of dynamic brain network changes behind the complex aging process. 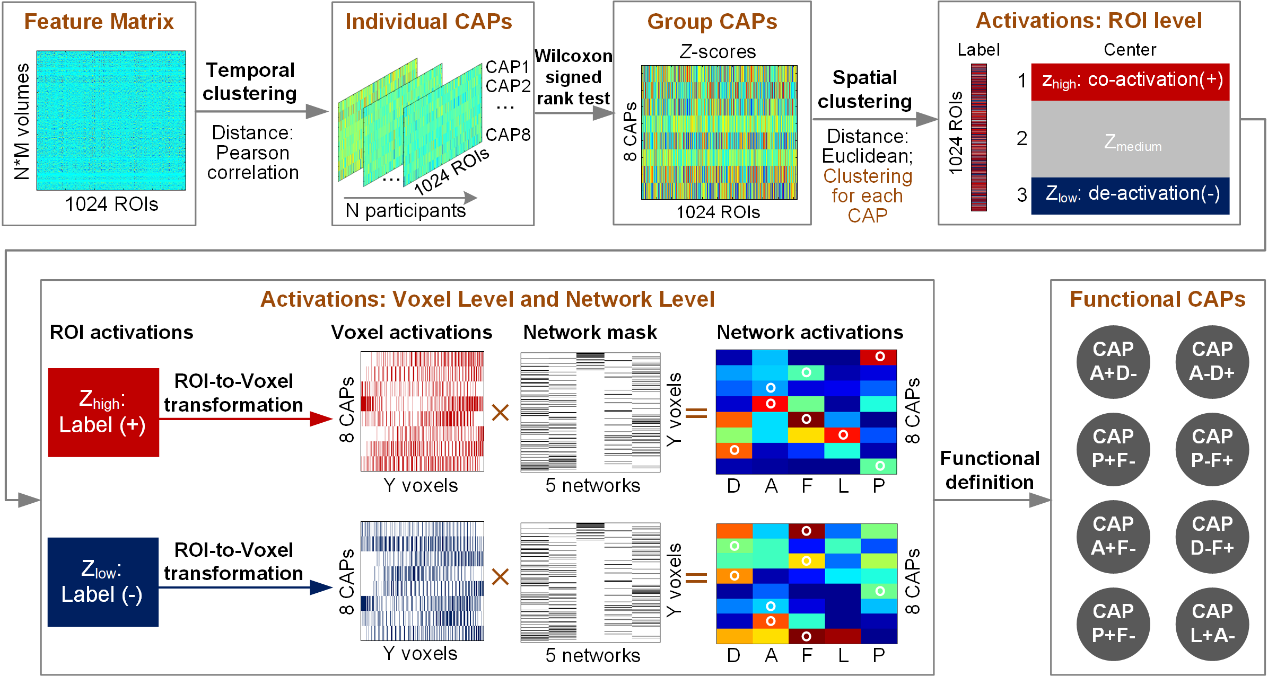 A total of 614 healthy subjects, with a gradient distribution of ages 18-88 years, were included in this study. A total of eight co-activation patterns were identified, six of which were strongly correlated with age. These six patterns describe co-activation patterns between primary sensorimotor and higher cognitive control functions, which tend to switch to their own patterns during resting-state brain function changes and rarely switch to the opposite pattern.

These results suggest that older adults spend less time in the primary sensorimotor network and frontoparietal network coactivation patterns, which could explain the decline in primary sensorimotor abilities such as vision and hearing in older adults. At the same time, the typical higher cognitive control networks (default mode network and attention network) co-activation patterns showed a compensatory increase, which could explain to some extent the increase in crystal intelligence (experience-based cognitive abilities) in older adults. The above findings help us to understand the patterns of brain aging, and the aging-related activation patterns are expected to serve as brain disease markers and targets for personalized neuromodulation therapy. The related results were published in Radiology, the second-ranked (2/133) Region 1 Top journal in radiology, nuclear medicine and medical imaging.

Liu Tiantian, the sole first author of this paper, a 2018 master's degree student in the School of Life Science, BIT. Liu Tiantian joined the lab from the third year of undergraduate study, and became the first PhD student of Yan Tianyi in 2018, and has been engaged in the research of medical image data processing and non-invasive regulatory interventions for neuropsychiatric diseases. Liu Tiantian has published 12 SCI papers in Radiology, Brain structure and function and other journals, including 6 papers of first/co-first authorship, 1 national invention patent authorized, and 1 national scholarship for PhD students.

Prof. Yan Tianyi, the only corresponding author of this paper, a professor and PhD supervisor of BIT, the vice dean of the School of Life Science, the head of the Department of Biomedical Engineering, a national high-level young talent, and a rising star of Beijing Science and Technology. Prof. Yan Tianyi is mainly engaged in theoretical and instrumentation development, as well as non-invasive neuromodulation mechanism and technology research in the field of brain science and neurological disease diagnosis and treatment. He has published more than 100 academic papers, including more than 60 SCI papers in Nature Communications, Radiology, Theranostics, Stroke, IEEE TNNLs, Medical Imaging Analysis and other journals as the first author or corresponding author. He has published 30 papers in CAS TOP journals, 5 hot papers, highly cited papers and Cover paper papers. He also obtained 18 national invention patents, and presided over 20 projects such as the National Key Research and Development Program, the National Natural Science Foundation of China, and the Beijing Major Science and Technology Project. His related brain rehabilitation equipment was awarded one NMPA (Medical Device Registration Certificate Certification of the People's Republic of China), led to the approval of an expert consensus on non-invasive neuromodulation in Alzheimer's disease, and won the first prize (ranked first) of the China Invention Association Invention Innovation and Entrepreneurship Award and the first prize (ranked first) of the educational teaching achievements of BIT.