In his 32 years of teaching, he has trained nearly 40 high-level throwing athletes, 18 gold medalists, and won many championships in the National Student Games, National University Athletics Championships, Beijing University Athletic Conference. He has created a “Cao’s Team” that strives to be the first, with outstanding achievements, and has written the history of the throwing program of BIT. He is a member of the BIT Athletics Team. He is the coach of the throwing program of BIT Athletics High Level Athletic Training—Cao Dawei. 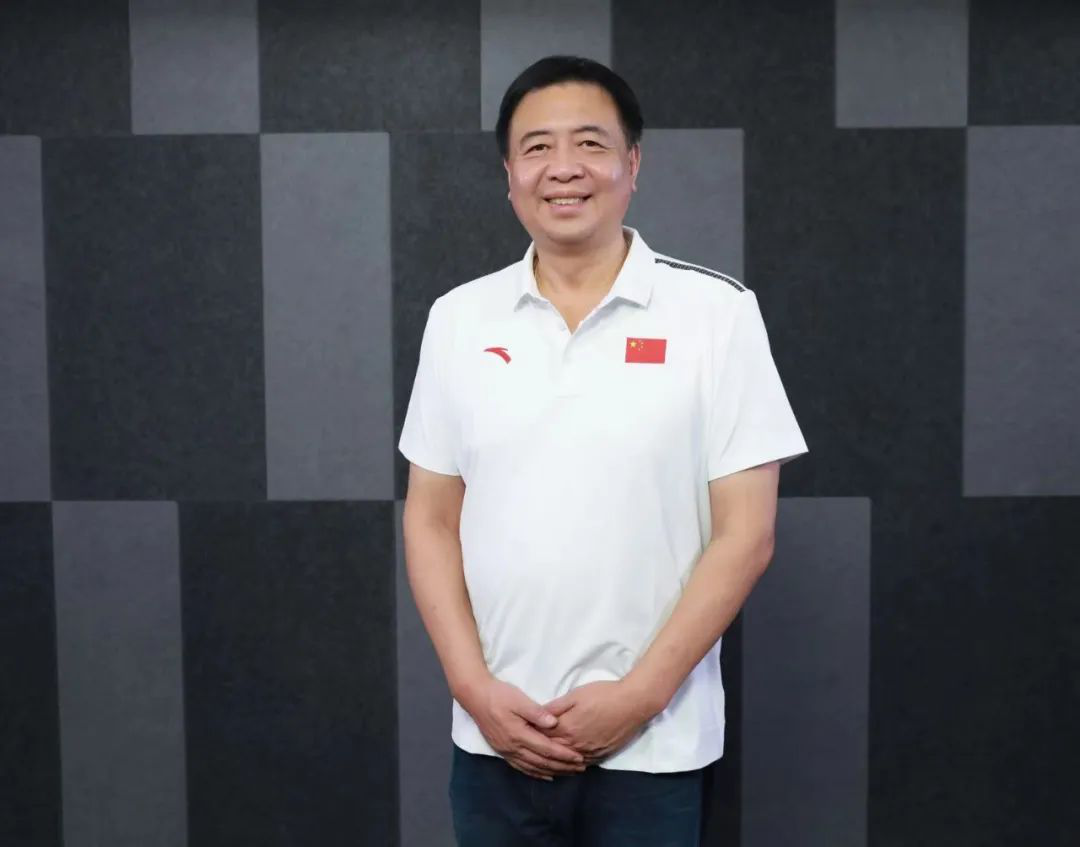 “Pre-swing, rotate, final force, throw ......”. The discus drew a perfect arc in the air and landed steadily in the boundary of the throwing area.

"Wei Zidong, 57.55 meters," Wei Zidong, the "God of Game", who once again set a new best score for men's discus at the 2021 National Athletics Championships. After knowing the result, Wei Zidong and his coach Cao Dawei hugged each other tightly and cried for joy. 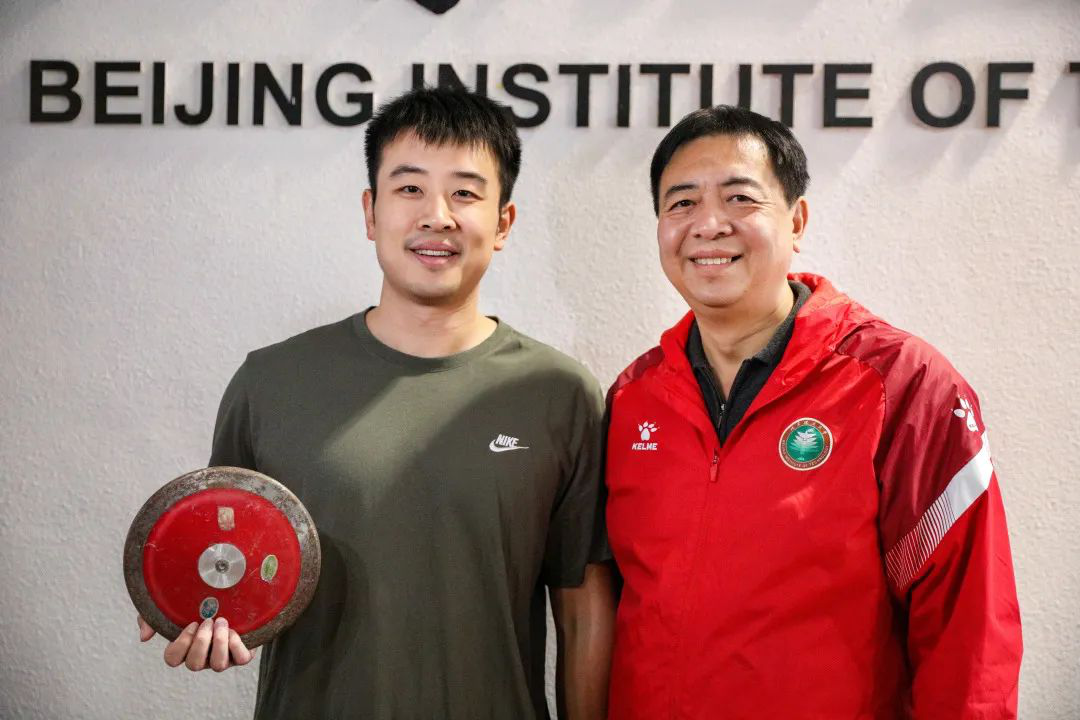 Behind the brilliant achievements of many throwing distance athletes represented by Wei Zidong, it is soaked with the hard work and sweat of Cao Dawei.

☆ From champion student to champion coach ☆

Cao Dawei was born in Jinzhou, Liaoning Province, in 1968 to a sports family. Cao Dawei had a deep interest in sports as a result of his exposure to numerous activities when he was a child. Cao began semi-specialized training at the Liaoning Provincial Sports School when he was 12 years old. Cao’s talent and dedication to training resulted in a successful athletic career. He earned multiple accolades, including the shot put championship in the Liaoning Province Junior Athletics Title and the Junior Group championship in the National Amateur Athletics Competition. In 1985, he enrolled in the Shanghai Institute of Physical Education’s Athletics Department to study track and field.

“Strive to lead BIT student-athletes to the top podium of the Beijing Collegiate Athletics Competition within 2 to 3 years!” After graduating in 1989, Cao Dawei entered BIT and started to coach the high-level athletic training special throwing events. Continuing his athletic days, he set a clear goal for himself at the beginning of his career.

As he was not experienced enough, Cao Dawei actively consulted and exchanged ideas with experienced teachers; when the athletes’ training program was not systematic, he made a detailed training program from the aspects of training plan development, time arrangement, organization, and implementation. In 1992, the first student-athlete Tian Xuehui, who was coached by him, won the championship of women’s javelin throwing with the score of 47.78 meters in the 1992 Beijing University Students’ Athletic Games; in 1994, Tian Xuehui and Zhang Jing successfully won three gold medals in women’s shot put, discus and javelin, achieving the women’s throwing event “Grand Slam”. 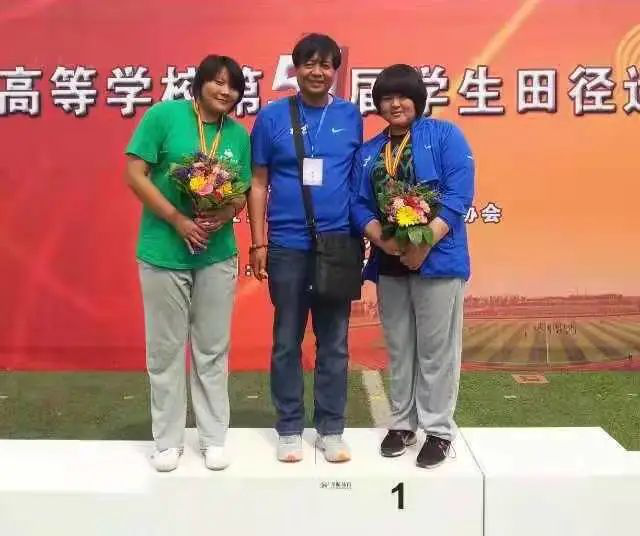 As time goes by, thirty-two years have flown by in a flash. Under the unremitting efforts of Cao Dawei, from 1999 to 2011, BIT women’s shot put project has been the champion of Beijing University Students’ Athletic Conference for 12 consecutive years; from 1999 to now, the throwing team has been the champion of University Students’ Athletic Conference for 22 consecutive years; men’s discus project has entered the National Games competition for three consecutive times and won the second and seventh place; from 1996 to now. Since 1996, 8 BIT throwing students have represented Beijing colleges and universities to participate in the Academic Games, and won “two gold and one silver” in men’s shot put and men’s discus in the last three Academic Games; since 2014, BIT throwing students have won four gold, three silver and three bronze in the National University Athletics Championship.

“In terms of throwing events, the explosive power of athletes is the most crucial, in addition, body form, speed, endurance and coordination also play a very important role.” To develop high-level athletes, Cao Dawei believes that physical fitness is very important. No matter what the foundation of the students, Mr. Cao carefully guides and develops training plans with the actual situation. If there is a gap between students’ strength and professional athletes, Mr. Cao will provide targeted strength training; if there is a technical gap, Mr. Cao will record the students’ training movements and analyze them frame by frame. In this way, day after day, Cao Dawei has cultivated a number of “good students” for the BIT throwing team. 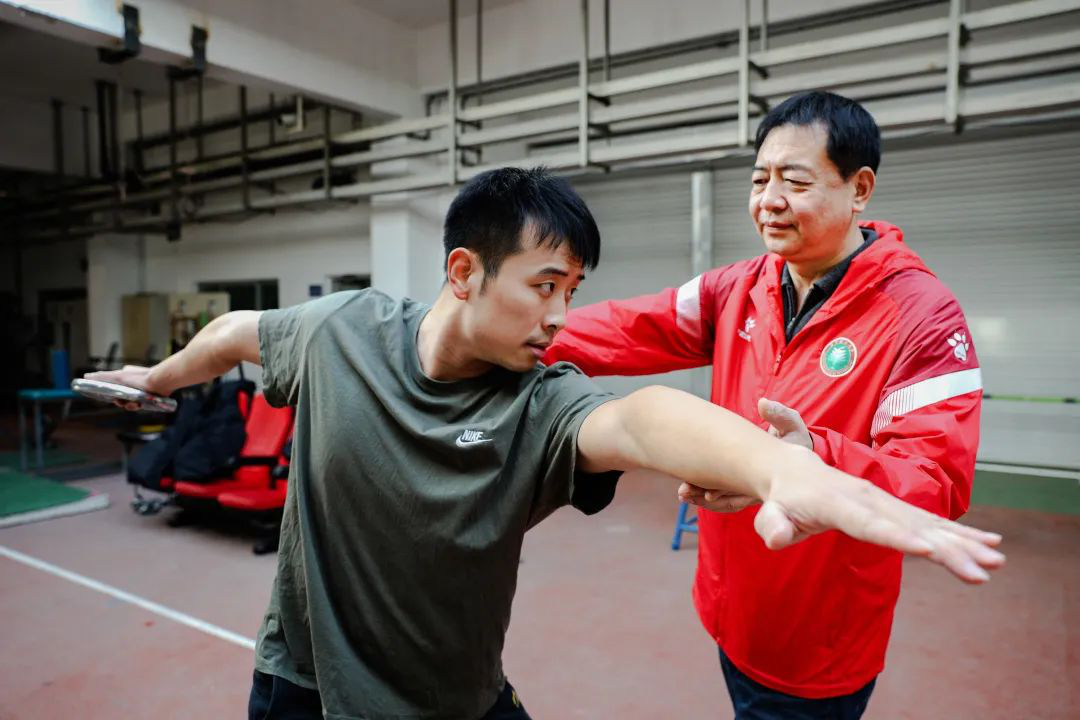 “Students practice for as long as Mr. Cao is with them. Students don’t rest, and Mr. Cao never sits down. Following Mr. Cao’s training, I have the confidence to achieve better results!” Li Yue, who studied in Tsinghua High School, is a good shot put thrower. Although she had been guaranteed a place in Tsinghua University and Peking University, she chose BIT with a dream of being a champion after learning about the performance of BIT’s throwing team and the level of coaching by Cao Dawei. After entering BIT, Li Yue’s athletic ability was further stimulated, and she won the championship of women’s shot put in Beijing colleges and universities for four consecutive years, and won eight medals during her school years. 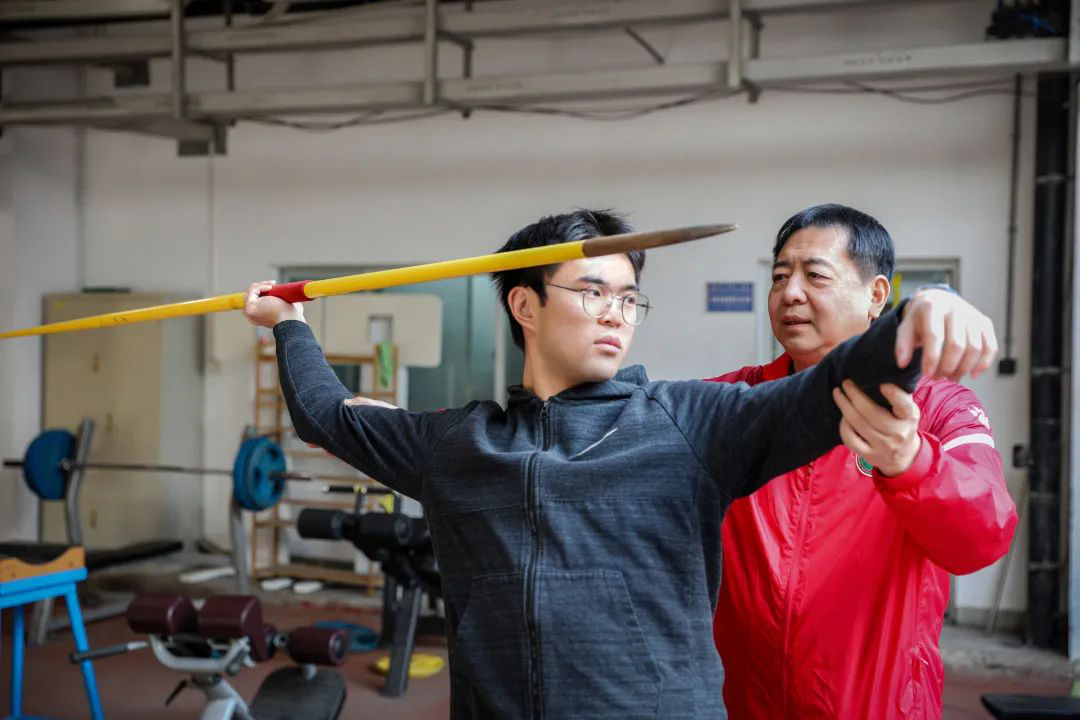 “The coach should be a good gatekeeper for the intensity and training methods of the students. Take different methods to train different students. To train hard and smartly instead of blindly.” Cao Dawei studies the training methods of international high-level athletes and combines them with the actual students of BIT, to sum up a set of unique training methods. 2008 class student Zhang Xulong has been unable to find his form after entering the school, and his sports performance has dropped dramatically, never reaching the expected results.

Under the scientific guidance and encouragement of Cao Dawei, Zhang Xulong gradually recovered his condition and won “three gold and two silver” in the men’s discus in the subsequent Beijing University Athletics Games. He also finished fourth in the 2012 Academic Games and eighth in the National Track and Field Championships.

“The throwing team is a united and loving family, where there is warmth, love and moreover, family-like attachment.” This is a common evaluation of the throwing team by the students. Cao Dawei loves students like a son, and he is also a teacher and a friend to them. When a student is sick, he will help contact the hospital and find an authoritative doctor, and sometimes he will make the Chinese medicine himself; when a student has financial difficulties, he will pay for the student’s living expenses out of his own pocket to help them complete their studies successfully. Cao Dawei is like the head of the throwing team, paying attention to the students’ life and study, giving them unfailing care and love. 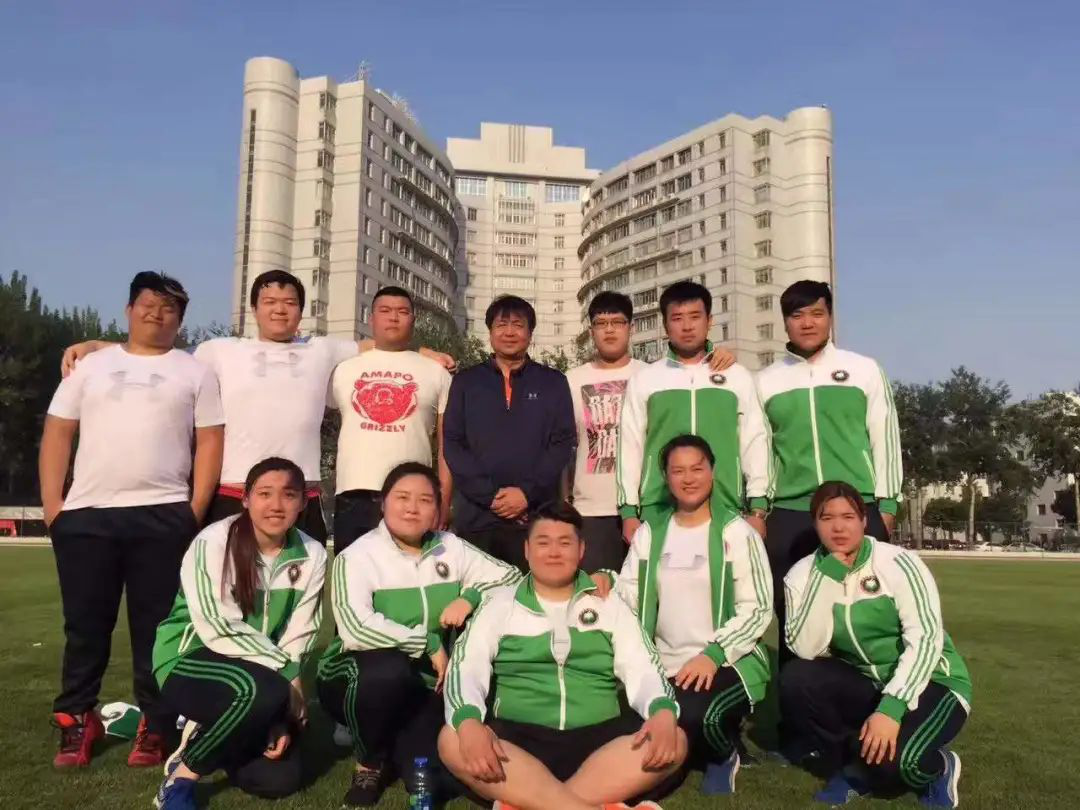 “I can’t fall down with such good students!” In 2007, due to the large number and concentration of competitions, Cao Dawei suffered from acute myocardial infarction and underwent stent surgery. However, just one week after the surgery, he was back on the track and field again.

“Physical education was available in our school during the period of the Academy of Natural Sciences, and the physical education classes back then improved the physical quality of students and served the war effort well, which is our valuable asset. Building a strong sports country is an important goal of building a comprehensive socialist modern country, and cultivating high-level competitive sports talents is a major task given to universities by the state. The spirit of BIT is the winning formula for us to overcome difficulties in various fields, and we have to prove ourselves with excellent competition results, adhere to independent training and scientific training, and show the strength and responsibility of BIT people.” Cao Dawei often encourages himself in this way, and often shares this with his students. In addition to daily training, Cao often talks with students and tells them the history of the university and the stories of the struggle of the old generation of BIT people. 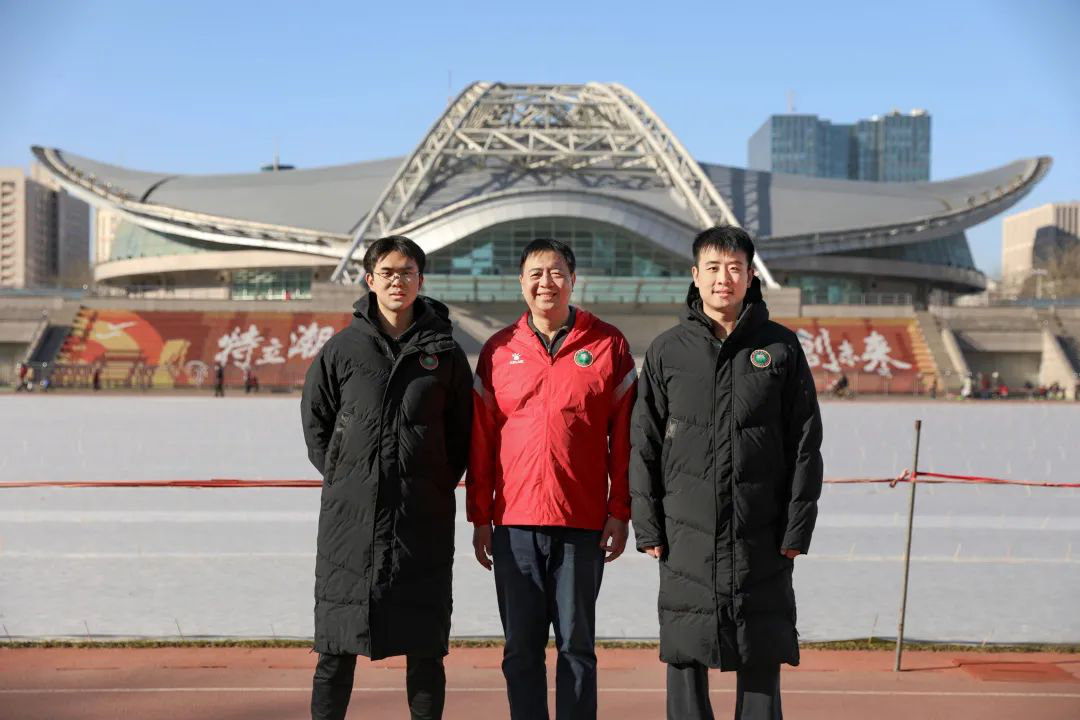 The struggle is endless. Talking about the future, Cao Dawei can’t help but think, “I hope more and more outstanding students will join the BIT Athletics Team, and create bright moments belonging to BIT on the international stage such as the Olympic Games and Asian Games in the future.”

I sincerely wish that BIT sports will go from glory to more glory!

On the occasion of the party-wide in-depth study and education on the history of the Party, the Propaganda Department of the Party Committee launched a special report entitled “Always Follow the Party, Advance to a New Journey” to comprehensively show the achievements made by the university in strengthening the leadership of the Party and building the Party, vividly tell the story of the struggle of the people of BIT, widely unite the majestic power for the development of the university and celebrate the 100th anniversary of the founding of the CPC with excellent achievements. The 100th anniversary of the founding of the Communist Party of China.

The column of “Craftsmanship Teacher” is planned by the Propaganda Department of the Party Committee of BIT which will launch a series of special reports on good teachers who insist on cultivating people with moral character, dedication and silent devotion in the front-line education positions one after another.