Transition metal oxyhydroxides (MOOH, M = Fe, Co, Ni) are usually the real active sites for electrocatalytic OER and can be obtained by irreversible surface reconstruction of various oxygen-containing materials. The low-dimensional layered structure MOOH has structural flexibility and is conducive to activity regulation. The selection of cobalt hydroxide nanosheets as the basic material, and the rational regulation of its structure and composition can obtain an efficient OER catalyst, which is of great significance for the development of electrolysis of water to hydrogen technology.

Research Highlights: a. The Introduction of Fe into Co(OH)2 to obtain CoFe(OH)x, Fe can promote the irreversible conversion of Co(II) to Co(III) during electrochemical reconfiguration, which is conducive to the construction of high-valent metal sites. b. The presence of amorphous/crystalline structure heterointerfaces in the obtained CoFeOOH nanosheet structures can expose more accessible active sites for the catalytic reaction and promote the exertion of catalytic activity. c. Constructing nanosheet structure catalysts on three-dimensional nickel foam skeletons is conducive to exposing more active sites, and the open structure between the interactive nanosheet structures is also conducive to the occurrence of electrocatalytic OER mass transfer.

Fig 1. Schematic diagram of the preparation of CoFeOOHNS/NF by electrodeposition and electrochemical reconstruction.

We constructed a composite catalyst CoFeOOH with high-valent metal sites and amorphous/crystalline heterointerfaces on a three-dimensional nickel foam framework by electrodeposition and electrochemical reconstruction. The interconnected nanosheet structure provided a large specific surface area and rich active sites for the catalytic process, and the open pore structure between the nanosheets provided convenient conditions for the electrocatalytic mass transfer process and the accessibility of active sites (Fig.1-2). 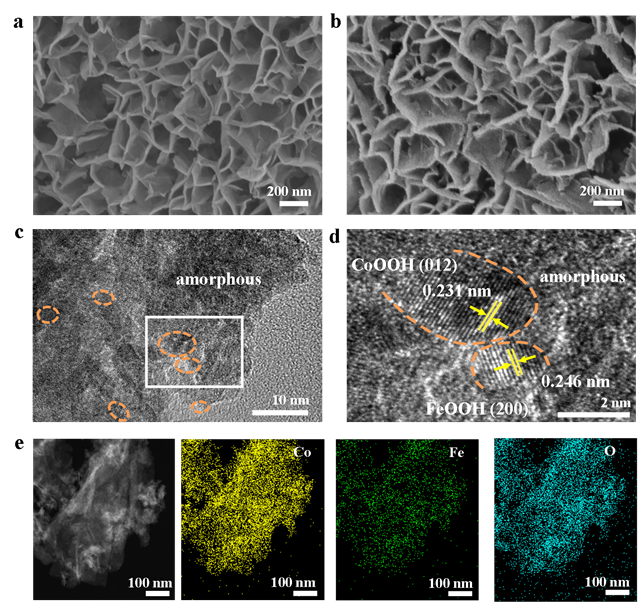 Through the characterization, it can be found that the nanosheet structure of the precatalyst is well maintained after electrochemical reconstruction, and there is a rich amorphous/crystalline heterogeneous interface in the nanosheet structure, as well as high-valent metal sites CoOOH and FeOOH, where the elements are evenly distributed. 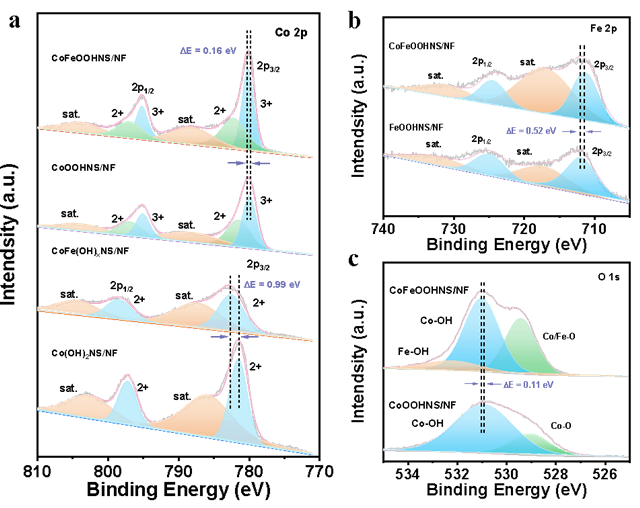 The formation of high-valent metal sites was demonstrated by XPS characterization, and the shift of the binding energy of the metal elements in them demonstrated the existence of interactions between metal sites, which was conducive to promoting the OER process. 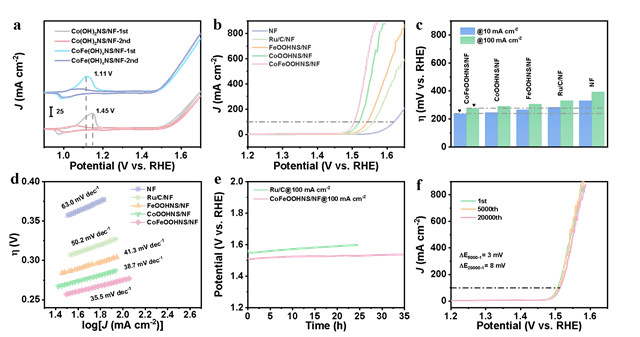 Electrochemical property characterization found that the introduction of Fe into Co(OH)2 nanosheets promoted the transformation of Co(II) to Co(III) high-valent metal sites during electrochemical reconfiguration, which was beneficial to the active components of the catalyst. (Fig. 4a). Compared with the comparison samples, the target catalyst CoFeOOHNS/NF exhibited smaller overpotentials, including η10 = 236 mV and η100 = 275 mV at current densities of 10 mA cm-2 and 100 mA cm-2(Fig.4b and c), respectively, while its minimum Tafel slope (35.5 mV dec-1) demonstrated that the catalyst had faster charge transfer and more efficient kinetic process in OER catalysis (Fig. 4d). At a current density of 100 mA cm-2, CoFeOOHNS/NF can stably catalyze OER for up to 35 h without significant attenuation, and the polarization curve shows that its overpotential is only positively shifted by 8 mV before and after 20,000 cycle volt-ampere tests (Fig. 4e and f). Taken together, the results show that the CoFeOOHNS/NF has high catalytic activity and stability for OER. 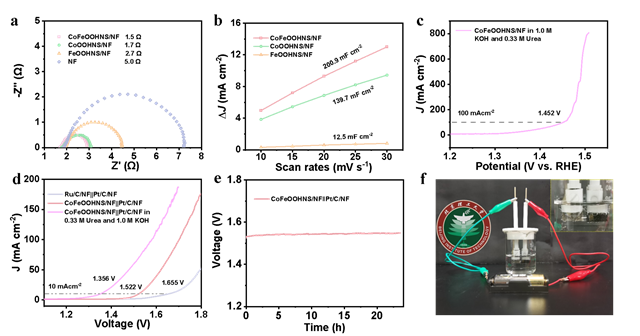 The AC impedance test proved that the target CoFeOOHNS/NF has a smaller impedance value, and the double capacitance test proved that it has a larger electrochemically active area (Figure 5a and b), which are conducive to promoting the improvement of electrochemical activity. We also studied the performance of the target catalyst in the catalytic oxidation of urea in alkaline solution. From its polarization curve can be found that when .033 M urea is present in the solution, the overpotential under 100 mA cm-2 is only 1.462 V, if the use of urea oxidation as the anode reaction for hydrogen production from water electrolysis can moderately reduce the waste of electric energy caused by the large overpotential in the OER process. Therefore, we have studied the performance of electrolytic cells using water electrolysis to produce hydrogen under different conditions. As shown in Figure 5d, it can be found that the catalyst has great potential in the reaction of using urea as the anode for water electrolysis to produce hydrogen. Figure 5e demonstrates the high stability of the electrolytic cell with CoFeOOHNS/NF as the anodic OER catalytic electrode. Figure 5f shows a CoFeOOHNS/NF‖Pt/C/NF electrolysis cell driven by a 1.5 V commercial battery. It can be seen that bubbles are generated on the two electrodes, which proves the excellent performance of the catalyst.

Introduction of the research group attached:

Wang Bo, member of the Standing Committee of the Party Committee and vice president of BIT, director and professor of the Center for Frontier Science of High-Energy Matter. The National Ten Thousand Talents Program Leading Talent, the winner of the National Outstanding Youth Fund, and the Young and Middle-aged Science and Technology Innovation Leading Talent of the Ministry of Science and Technology. Won the "Clarivate Analytics World Highly Cited Scientist", "Chinese Chemical Society Youth Chemistry Award", Beijing Youth May Fourth Medal and other honors. He is currently a member of the Standing Committee of the China Association for Science and Technology, a member of the Science and Technology Committee of the Ministry of Education; the executive director of the MOF Commission of the International IZA Society, an expert of the hydrogen energy special overall group of the Ministry of Science and Technology, the executive director of the Chinese Society for Environment and Sustainable Development of the Ministry of Communications, and the International Academy of Electrochemical Energy (IAOEES). Director, Vice Chairman of Zhongguancun Hydrogen Energy Technology Alliance, Director of Environment and Sustainable Development Society of the Ministry of Communications of China, part-time Director of Beijing-Tianjin-Hebei National Technology Innovation Center; editorial board of China Chemical Express, Chinese Chemical Journal and Scientific Reports, etc. Deputy Editor-in-Chief of Journal of the Environment. Mainly engaged in the theory and design of novel nanoporous materials, open framework polymers and their applications in key separation processes, environmental protection, and energy gas production and energy storage. Published more than 90 papers in academic journals such as Nature, J. Am. Chem. Soc., Angew. Chem. Int. Ed., etc., and obtained 6 authorized patents in the United States and 8 authorized invention patents in China.

Yang Wenxiu, BIT, Ph.D. supervisor, associate professor. Mainly engaged in the synthesis of functionalized nanomaterials and their applications in the fields of catalysis and new energy (water electrolysis, zinc-air batteries, fuel cells and CO2 reduction, etc.). In recent years, the applicant has published 52 SCI papers, among which, as the first/corresponding author, 24 papers have been published in international journals such as Trend. Chem., J. Am. Chem. Soc., Angew. Chem. Int. Ed., cited more than 3000 times. Apply for 6 invention patents. As the project leader, he presided over the general projects of the National Natural Science Foundation of China, the Youth Fund Project, the China Postdoctoral Science Foundation, and the Beijing Institute of Technology's start-up plan.