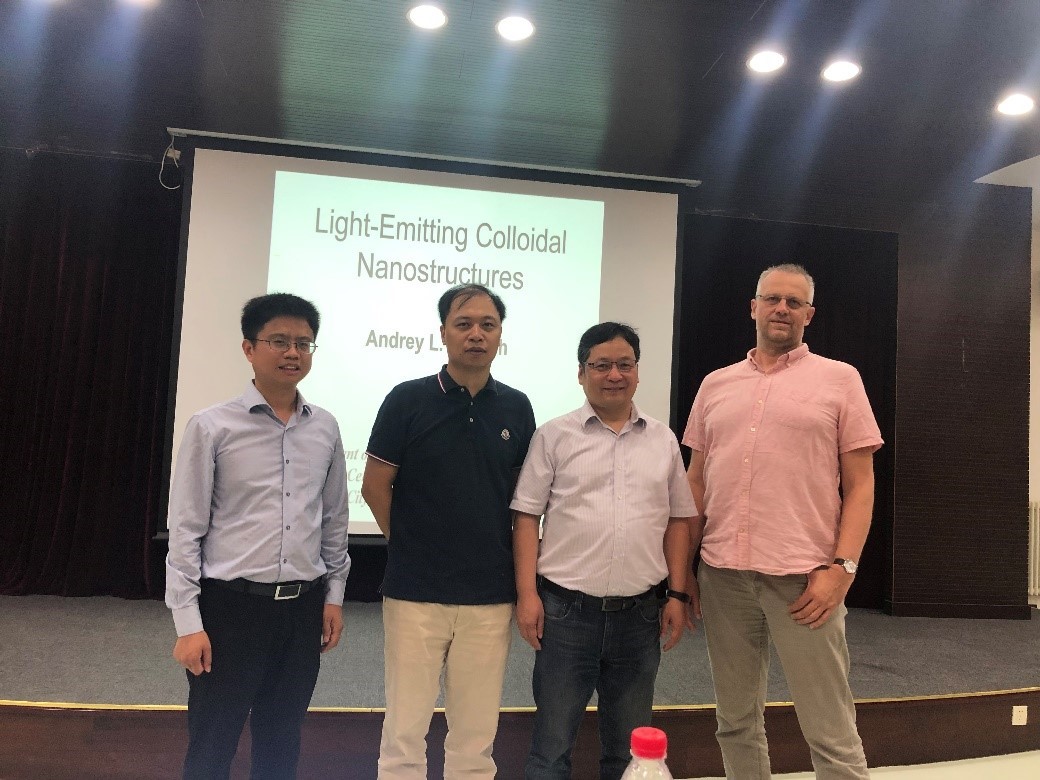 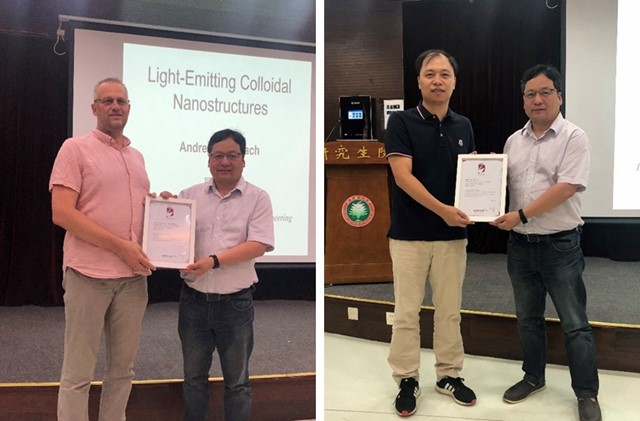 The luminescent colloidal nanomaterial can be synthesized conveniently in the liquor. As an example, the quantum dot of nanomaterial has been widely applied. In Professor Rogach’s lecture, he introduced the luminescent colloidal nanomaterial synthesized in his lab, including carbon dot, CaTiO nanomaterial and copper cluster, focusing on their photophysical properties and potential applications. In Professor Jin’s lecture, he introduced the work in the field of luminescent device by his team, including the material chemistry of transport layer, structural design of prototype device, optimization and working mechanism, and single photon source device.

Professor Andrey L. Rogach is chair professor of material science department at CityU, head of the research center of multifunction photojuvenation, and associate editor of ACS Nano. His research interests include the colloidal quantum dots and metallic nanocrystals. He has made achievement in the research of semiconductor nanocrystals and surface plasmon resonance. He has published more than 400 papers in Nature Materials, Nano letters, ACS Nano, Advanced Materials, Advanced Functional Materials, J. Am. Chem. Soc., Angew. Chem. Int. Ed., Physical Review Letters, cited over 40000 times by SCI. At present, he is authorized as the part-time professor and doctoral supervisor by BIT.

Professor Jin Yizheng, doctoral supervisor in ZJU, is the winner of the National Science Fund for Distinguished Young Scholars. He graduated from Beijing University and got a Bachelor Degree in 2002, then got a Doctor Degree from University of Sussex. In March, 2006, he stated his postdoctoral study in the Cavendish Laboratory at Cambridge University. In October 2007, he was appointed as associate professor by ZJU. In March, 2015, he switched over to teaching in the school of chemistry, ZJU. His research interests include chemical and physical performances of photoelectric device. He has published more than 50 papers in Nature, Nat. Photo, Nat. Comn, Adv. Mater, cited over 4000 times. He has received the Young Scholar Award of China Chemical Society and the Qiushi Award for Young Scholar.