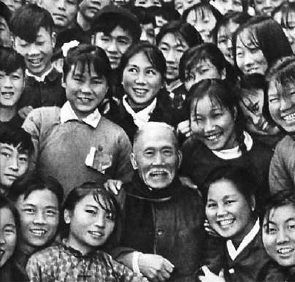 Xu Teli: The Educator of Forever 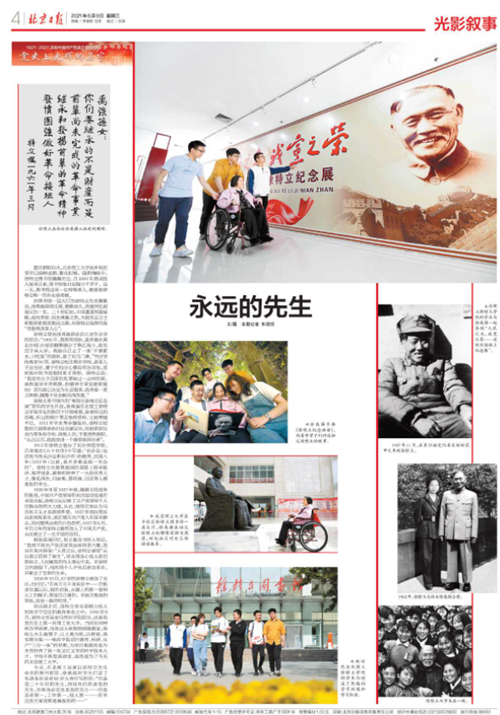 In the scorching summer sun, green trees and pretty flowers are full of Liangxiang campus of BIT. Xu Teli Library stands tal in the shade of the greenery. Since its foundation and operation in 2008, the library has welcomed thousands of students each day. On this day, a special guest has come here, and she was Xu Teli’s only granddaughter, Xu Yuqiang.

In front of the statue of Mr. Xu Teli on the first floor of the library, Xu Yuqiang watched the statue affectionately and was silent for a long time, recalling the life of his grandfather again. At the beginning of the twentieth century, the Chinese has suffered from aggression by foreign powers, political darkness, when a great number of people with lofty ideals actively explored the way to save the country and the people. Xu Teli took a road to "reform people's minds through education."

Xu Teli once told Xu Yuqiang about his early experience in running a school: "In 1905, He Yunong, Jiang Jihuan and I established Lijiang Senior Primary School in Xuli Town, 30 miles away from Changsha City, and we enrolled peasant children. I set up a role for myself: teaching several courses and just eating without asking for the salary.” At that time, the school was 50 miles away from home, and Xu Teli was living and eating at school. Even when his son was born, his wife was afraid that he was distracted and did not tell him. He didn’t know the news until the Mid-Autumn Festival when he came back home. Xu Teli said: "I have never missed one hour of class due to my own personal affairs. Although I suffered a lot, I am very comforted and happy! Because I have decided to serve the society, I hope that the difficulties of the family can be solved with the improvement of the whole society."

The "Old Dean Xu Teli Memorial Exhibition" in the Xu Teli library is open to students all year round. Xu Yuqiang, accompanied by students from BIT Xu Teli College, carefully watched the noodle bowls used by Xu Lao and the records he heard. The objects and information made her sigh. After the outbreak of the 1911 Revolution in 1911, Xu Teli served as temporary deputy speaker of the Hunan Provincial Interim Assembly . However, he saw the internal struggle for power and profit and betrayal of the people, so he resigned angrily. "From then on, I have become an education and national salvationist."

Xu Teli founded Changsha Normal School in 1912. Later, he wrote in "Sixty Autobiography": "The education in Changsha County (including present-day Changsha County and Changsha City) was almost all before the eighth year of the Republic of China (1919). I did it alone." Xu Teli has arduously trekked and worked hard on the road of saving the country through education, and has educated and cultivated a large number of outstanding talents, such as Mao Zedong, He Shuheng, Cai Hesen, Tian Han and others are his students.

From the winter of 1926 to the spring of 1927, with the development of the Northern Expedition, the peasant movement led by the Communist Party of China quickly emerged throughout the country. Xu Teli recognized the great power of the people under the leadership of the Communist Party. From then on, he firmly believed that Marxism was the hope of salvation. In 1927, the Kuomintang reactionaries betrayed the revolution and frantically suppressed the communists and revolutionary masses. Faced with the bloody white terror, Xu Teli resolutely joined the Communist Party of China in May 1927, half a century old, and since then established a lifelong faith.

According to Xu Yuqiang, her grandfather said about joining the party at that time, “It never occurred to me that the Communist Party would want an old antique like me. I am really happy!” After joining the party, Xu Teli felt that he “really gained a new life” and devoted all his body and mind to the nation In the great cause of independence and the liberation of the people. Encouraged by Xu Teli, his two sons joined the revolution successively and gave their precious lives.

In October 1934, 57-year-old Xu Teli participated in the Long March. He recalled: "During the 25,000-mile Long March... Since I arrived at Zhuo Keji, my clothes, from the shoes on my feet to the hat on my head,  were sewed by myself. In the grass that lacks food, I usually eat grass."

After arriving in northern Shaanxi, Xu Teli devoted all his energy to education in the Shaanxi-Gansu-Ningxia Border Region. In August 1940, Xu Teli served as the dean of the Yan'an Academy of Natural Sciences, which was the first science, engineering and agricultural university in the history of our party. At that time, with various difficulties in running a school, he mobilized everyone to dig cave dwellings to make classrooms, build stools with bricks and wood, use land as paper, branches and chicken feather tubes as pens... He tried out the "triad" idea of education, scientific research and production at the college. For the anti-Japanese base areas and for the whole party, Xu as well as his colleges has trained the first batch of red and professional scientific and technical personnel. The school continued to evolve and eventually became the Beijing Institute of Technology today.

Today, in front of the BIT library named after Mr. Xu Teli, Xu Yuqiang read to the students a letter from Mao Zedong on Xu’s 60th birthday: " 20 years ago, you are my teacher, and now you are and will definitely be my teacher in the future...You are the pioneer of the Revolution, you work so hard and always think of others, and I admire you in all these aspects..."