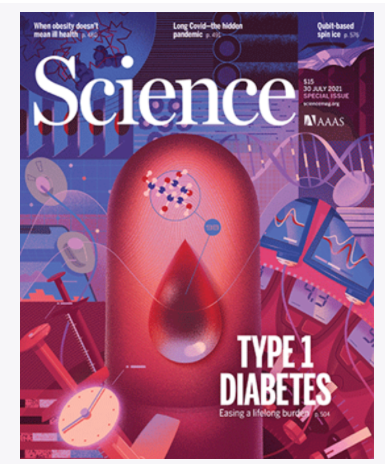 On July 30, 2021, Professor Chen Qi of Beijing Institute of Technology and Distinguished Researcher Zhou Huanping of Peking University published an article on Science, Liquid medium annealing for fabricating durable perovskite solar cells with improved reproducibility, in which they developed a simple annealing process for perovskite thin films ——Liquid-phase medium annealing. This process opens up a new way for the all-weather reproducible preparation of perovskite films with high-quality and spatially uniform components.

In recent years, with low raw material costs and simple processing techniques, rapid development of photoelectric devices has been achieved based on organic-inorganic hybrid perovskite (such as solar cells, light-emitting diodes, photodetectors, etc.). Among them, the perovskite polycrystalline film is usually prepared by a solution method, which mainly includes coating a precursor solution (such as spin coating, knife coating, etc.) on the substrate and annealing of the wet film.

The crystalline quality of the perovskite film is critical to the device performance. Adjusting the chemical state of the perovskite precursor solution and the coating process can control the kinetic behavior of crystal nucleation and growth, thereby greatly improving the crystalline quality of the film. However, the growth process of perovskite film is easily affected by environmental factors (such as humidity, organic atmosphere concentration and other uncontrollable factors), and the material itself is highly reactive under annealing conditions (such as thermal decomposition reaction, redox reaction, etc.). Therefore, it is difficult to prepare large-area thin films with uniform composition and phase in the traditional process, and the process reproducibility is poor, which limits the process of its industrial preparation.

In response to this problem, we developed a simple annealing process for perovskite films—liquid-phase dielectric annealing. As shown in Figure 1, the pre-deposited wet film is immersed in a liquid phase medium at a specific temperature and annealed to obtain a high-quality perovskite film. The "liquid medium" not only provides a uniform thermal field to promote the uniform growth of the perovskite film, but also constructs a stable chemical environment to effectively limit the side reactions during the growth of the perovskite. This method provides a solution for the reproducible preparation of high-quality perovskite films with uniform spatial distribution of component phases. 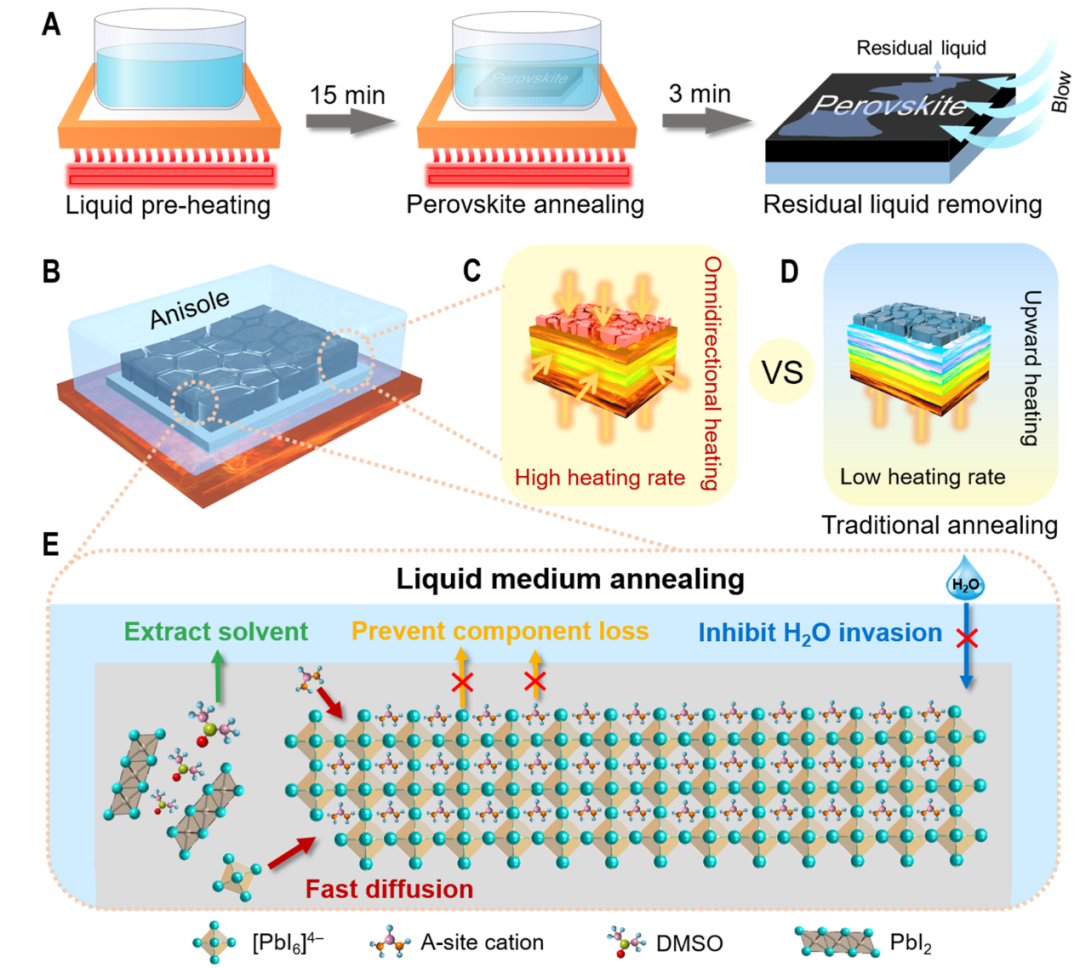 Figure 1: Schematic diagram of the process and mechanism of perovskite film annealing in liquid medium

Different from the traditional process of direct annealing in air or nitrogen, liquid-phase dielectric annealing and device preparation have the advantages as follows: 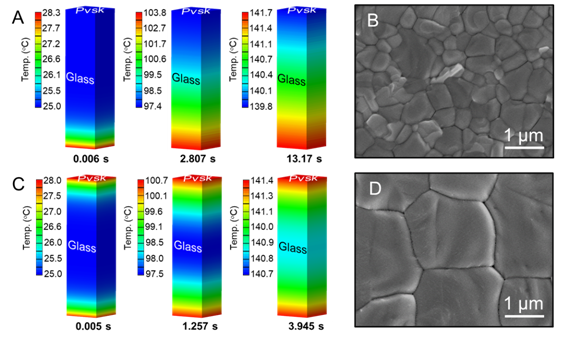 2) The liquid phase medium blocks the contact between the perovskite and the external environment, effectively inhibits the reaction of water, oxygen and other molecules with the perovskite, and also avoids the influence of organic atmosphere on the crystallization process of the perovskite. In addition, the "barrier" constructed by the liquid medium can inhibit the volatilization of gas phase components, thereby inhibiting the thermal decomposition of perovskite at high temperatures and maintaining the stoichiometric ratio of the components. The perovskite film gained by this method has fewer defects and a more uniform composition phase, which provides an idea for the preparation of high-quality large-area films.

Liquid-phase dielectric annealing makes the perovskite film have more uniform photoelectric properties, and the difference in cell efficiency between large area and small area is significantly reduced. At present, the small area device (0.08 cm2) has achieved a steady-state output efficiency of 24.04%, with a certified value of 23.7%. The large-area device (1 cm2) achieved a steady-state output efficiency of 23.15%, and the certified efficiency was 22.3%, which exceeded all publicly reported third-party certification efficiencies in this area. This method is expected to be further extended to the preparation of large-area battery modules. 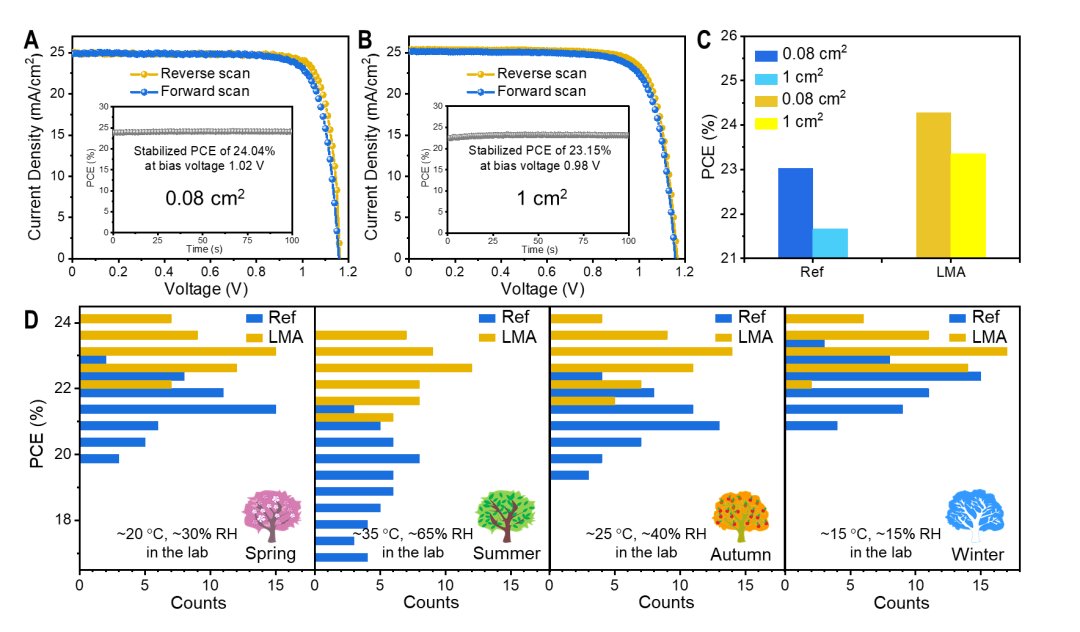 Based on the above results, we believe that this liquid-phase medium annealing process opens up a new way for the all-weather reproducible preparation of high-quality, spatially uniform perovskite films, which can be widely used in the preparation of different components (such as three-dimensional lead-based, tin-lead mixed, two-dimensional, etc.) perovskite optoelectronic devices (such as solar cells, light-emitting diodes, etc.).

Related information of the paper: 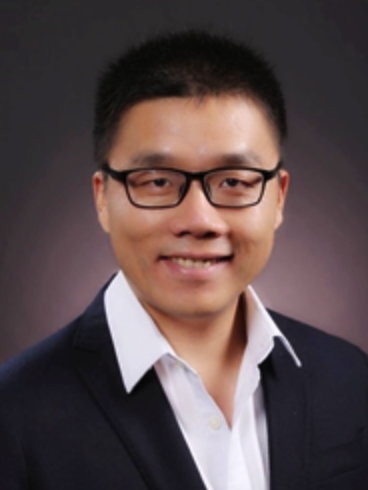 He graduated from the department of chemical engineering of Tsinghua University in 2005, graduated from the Department of chemistry of Tsinghua University with a master's degree in 2007, and graduated from the Department of material science and engineering of the University of California, Los Angeles (UCLA) with a doctor's degree in 2012, and then worked as a postdoctoral at UCLA California nano research center. In 2016, he joined Beijing Institute of Technology. In 2019, he was selected into the Outstanding Youth Project of Beijing Natural Science Foundation. He mainly engaged in the development and application research of organic-inorganic hybrid and composite materials. The materials are widely used in energy, photoelectric information and other devices, such as solar cells. He has published more than 90 papers so far, including Science, Nature Comm., Joule, J Am. Chem. Soc., Adv. Mater., etc., H-Index 38, with a total of more than 14,000 citations (Google Scholar), with a highest citation of a single article of more than 4,000. He was selected into the "Global 2018 Clarivate Analytics "Highly Cited Scientists" List". He has undertaken a number of national-level projects, including the Outstanding Youth Project of the Beijing Natural Science Foundation, the Key Research and Development Program of the Ministry of Science and Technology, the General Program of the National Natural Science Foundation of China, and the Beijing Science and Technology Program.

Facing the frontier of world science and technology

Grasp the general trend and seize the opportunity

Face up to the problem and rise to the challenge

Take up the important task given by the times